In our experiments, all stacks were fabricated on 12-inch thermal oxidized Si substrate and the films of stacks were deposited by ultra-vacuum magnetron sputtering system with a pressure of 10–8 torr at room temperature. After film deposition process, ex-situ annealing was progressed at a temperature ranging from 275oC to 450oC in a vacuum around 10–6 torr for 1 hr under 3 Tesla out-of-plane magnetic field.

To verify the PMA characteristic of CFA p-MTJs, we fabricated the pseudo-spin-valve (P-SV) stack consists of SiO2 / MgO(2.0) / Pt(2.0) / CFA(0.9) / MgO(1.8) / CFA(0.9) / Pt(2.0) where numbers are nominal thickness in nanometers. For the crystal texturing, the stack was ex-situ annealed at Tex = 450oC. Figure 1(a) shows the schematic structure of P-SV and its magnetic moment versus external magnetic field (M-H) curves. The PMA characteristic of CFA was definitely indicated in out-of-plane M-H curve as shown in Fig. 1(a). Nevertheless the conventional-spin-valve (C-SV) with CFA p-MTJs and [Co/Pd]n multilayer based synthetic anti-ferromagnetic coupled (SyAF) layer [3] has low TMR ratio of 1.7% despite the CFA free layer has PMA characteristic as shown in the inset of Fig. 1(b).

For understanding this unexpected result, we analyzed high-resolution transmission-electron-microscopy (HR-TEM) image of the PMA multilayer-stack structure of SiO2 / MgO(2.0) / Pt(2.0) / CFA(0.9) / MgO(0.9) / Pt(2.0) annealed at Tex = 450oC as shown in Fig. 2. To obtain high TMR ratio, MgO tunneling barrier system p-MTJs has to satisfy two important conditions. At first, magnetic anisotropy characteristic is required for maximizing resistance difference between parallel state and anti-parallel state. The next thing is body centered cubic (bcc) (100) crystalline linearity for Δ1 coherence tunneling with MgO tunneling barrier. However Pt seed layer was grown as face centered cubic (fcc) (111) orientation and it was transited to CFA during the processes of sputtering and annealing. As a result, this crystalline linearity disturbs Δ1 coherence tunneling and brings the lowering of TMR ratio.

It suggests p-MTJs using bcc (100) crystal structure seed layer to realize the good Δ1 coherence tunneling at CFA. Especially, we used W that can be the good assistant for p-MTJs due to the low resistivity and low diffusivity to MgO tunnel barrier. Figure 3 shows the M-H curves of the PMA multilayer-stacks structure of SiO2 / MgO(1.2) / W(3.0) / CFA(1.2) / MgO(1.2) with different ex-situ annealing temperatures. It was obviously obtained that the PMA characteristic was appeared at an ex-situ annealing temperature of higher than 400oC as shown in Fig. 3(d). It is result of that the large thermal energy is required for CFA crystallization. In other words, it is the greatest merit that CFA material has a large thermal endurance to back-end heat budget of semiconductor fabrication process such as a metallization.

In our presentation, we present the effects of W seed layer on CFA crystalline linearity affect to TMR ratio. In addition, we will review the magnetic properties of CFA grown on W seed layer using VSM, XRD and HR-TEM, etc. 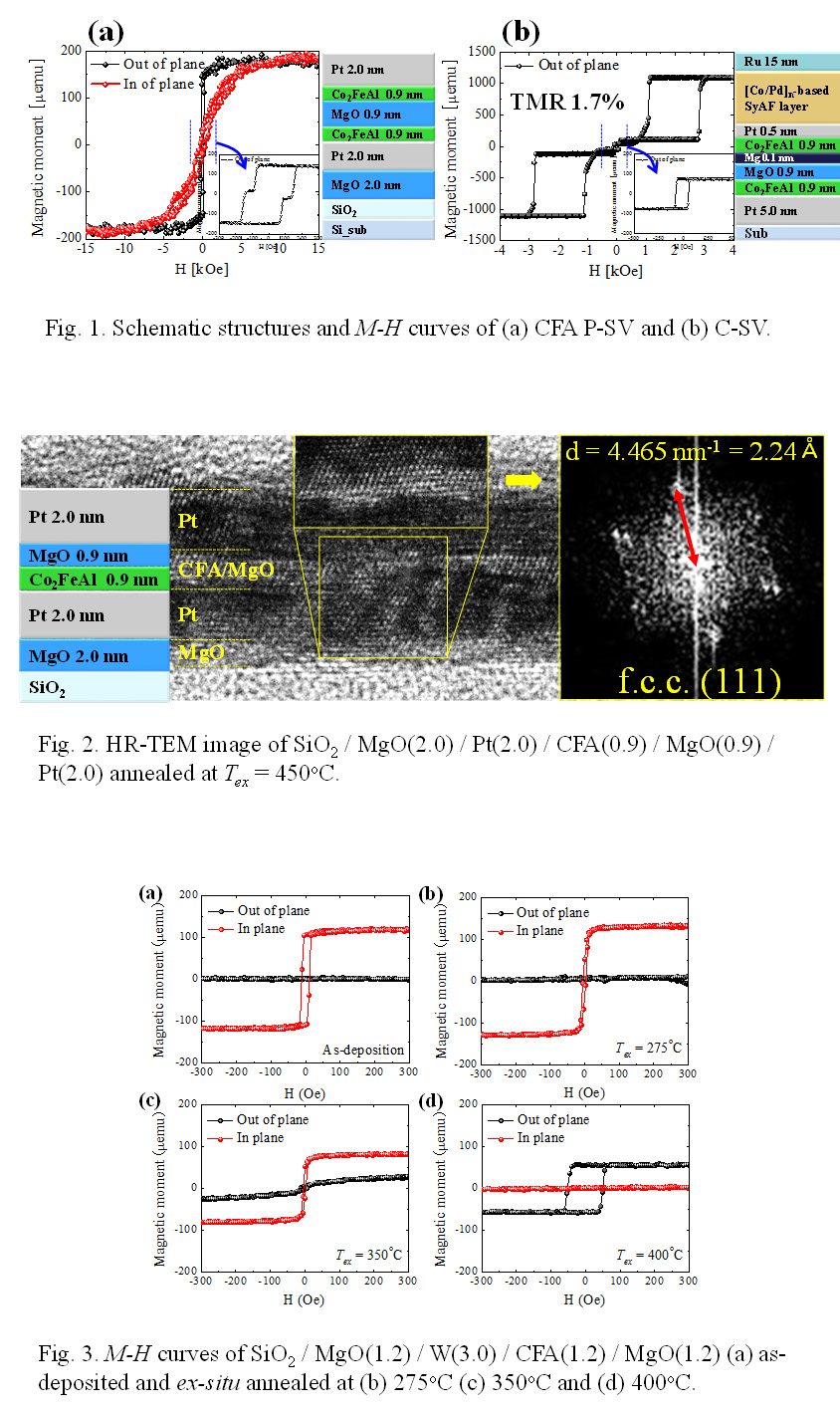