Development of non-noble metal cathode is required to commercialize polymer electrolyte fuel cells. We have investigated group 4 and 5 transition metal oxide-based cathodes. We reported that carbonitrides of tantalum, niobium, zirconium and titanium oxidized under low oxygen partial pressure had high catalytic activity for the oxygen reduction reaction (ORR) in acidic solution1-4). And we revealed that active site was oxygen vacancy on the oxide5).

In this study, we focused on tantalum whose oxide had high stability in acidic solution. We succeeded preparing the higher active catalyst by using organic metal complexes as stating materials and ball milling method6).  In this study, we tried to find out the factors which affect ORR activity.

Oxy-tantalum phthalocyanine (TaOPc) and multi-walled carbon nanotube (MWCNT) as a conductive material were conducted ball-mills. The powder was heat-treated for 0.5~15 h at 900oC under N2 containing 2% H2 + 0.5% or 0.05% O2 to prepare oxide-based catalyst powder (Ta-CNO).

All electrochemical measurements were performed in 0.1 mol dm-3 H2SO4 at 30oC with a 3-electrode cell. A reversible hydrogen electrode (RHE) and a glassy carbon plate were used as a reference and a counter electrode, respectively. A slow scan voltammetry was performed at a scan rate of 5 mV s-1 from 0.2 to 1.2 V under O2 and N2 atmosphere. A current density was based on the amounts of catalyst powder with carbon support. The ORR activity was evaluated by using current density at 0.8 V vs RHE (｜iORR@0.8V｜) and potential at 5 mA g-1 (Onset potential; EORR@5 mA g-1). XRD was performed to reveal the Full Width at Half Maximum (FWHM) of Ta2O5 (001).

Fig.2 shows the relationship between EORR@5 mA g-1 and FWHMs of Ta2O5 (001). FWHM decreased by increasing oxidation time each oxygen partial pressure. It was found that the EORR@5 mA g-1 increased with increasing the FWHM. Larger FWHM meant the lower crystallinity of Ta2O5. Lower crystallinity of Ta2O5 suggested the existence of oxygen vacancies with high ORR active site. 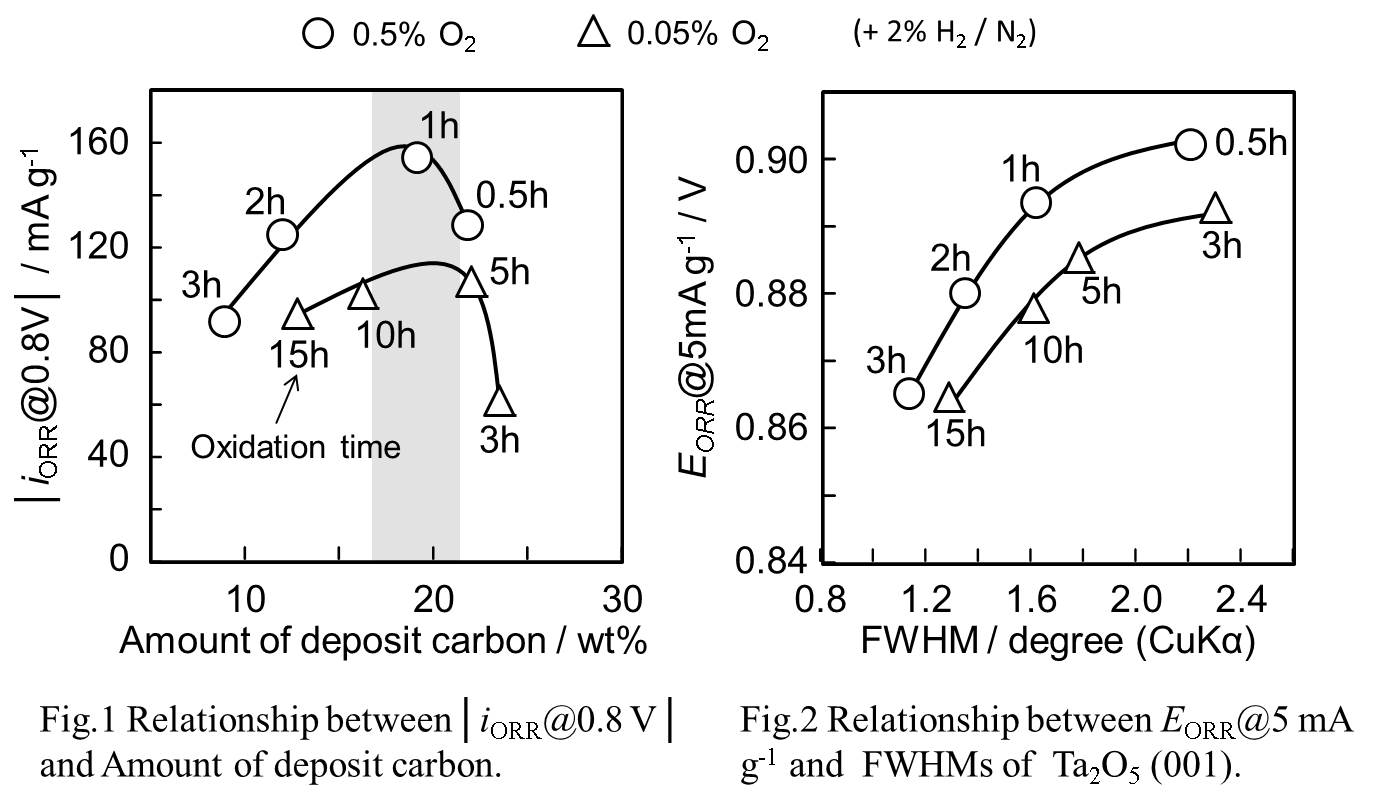