Expo Center, 1st Floor, Center and Right Foyers (Moon Palace Resort)
M. Kirkengen (Institute for Energy Technology), J. Voje (Elkem Technology AS), A. Fossdal (SINTEF Materials and Chemistry), B. Sandberg (Elkem Technology AS), J. P. Maehlen (Institute for Energy Technology), S. Y. Larsen (Elkem Carbon AS), P. E. Vullum (SINTEF Materials and Chemistry), P. J. S. Vie (Institute for Energy Research), H. F. Andersen (Institute for Energy Technology), and E. Sheridan (SINTEF Materials and Chemistry)
Elkem is one of the world’s leading companies for environment-friendly production of metals and materials. Among its principal products are metallurgical silicon, solar grade silicon, and different forms of carbon. For the coming generation of Li-ion batteries, silicon is a very attractive candidate to replace graphite as anodic material due to its remarkable energy density (3.6 Ah/g) and volumetric capacity (8.3 Ah/ccm). To tackle the massive cracking and degradation typically observed during electrochemical cycling of silicon anodes, we are developing composite nanostructured materials based on existing production of silicon and carbon at Elkem. The goal is to use silicon of optimum purity and doping w.r.t. production costs and performance mixed with carbon materials through milling techniques in a commercially viable way resulting in a product that can be used as anode material in Li-ion batteries.

Results show that performance can be substantially improved by using appropriate milling methods. The current presentation focuses on silicon-carbon nanostructures obtained by high-energy ball-milling in argon atmosphere. Silicon-carbon composites showed improved cycle life-time with ball-milling time, though usually accompanied with a loss of initial capacity due to high-surface area and extensive SEI formation. More pronounced improvements were achieved by co-milling silicon with graphite. Further enhancements were obtained by using additives in the electrolyte and by controlling the delithiation step during cycling.

The electrochemical performance was tested in half cells where typically the working electrode was made by mixing a silicon-carbon composite powder with an organic binder in an aqueous slurry and coated on a Cu-foil. Lithium metal was used as the counter electrode. Structural properties and degradation mechanisms were examined by electron microscopy (SEM, FIB-SEM, TEM) and XRD.

Figure txt: A) Charge (delithiation) capacity retention for selected Si-C based materials. The electrodes were cycled with C/20 rate for the three first and the last cycle. Other cycles were performed at C/10 rate (C-rate was based on the mass of Si assuming full capacity of 3.6 Ah/gSi). The curves labeled 1 was for materials only treated by low-energy milling of Si. A rapid decrease in capacity is seen already from cycle one. This is in contrast to composite materials made by mixed milling of graphite and silicon by high-energy ball milling (curves labeled 2 represents material milled for 20 minutes at 800 rpm, curves labeled 3 were milled at 5 minutes) where a rapid degradation zone appears first after ca. 10 cycles. FIB-SEM cross-sectional images of the cycled electrodes (cycle 8 – just before rapid degradation sets in, cycle 15 – middle of rapid degradation zone, and “dead” electrode after 55 cycles) show that the electrodes gradually become clogged both by SEI formation and Si-intergrowth and lose porosity. This is accompanied with a thickness increase, most dramatically seen after the rapid degradation zone. B) Discharge-charge characteristics for a composite Si+C electrode restricting the charge capacity to 1200 mAh/gSi pr. cycle (material: 80wt.% Si and 20wt.% graphite ball-milled for 5 minutes at 800 rpm). All electrodes were tested as half-cells with a Li-counter electrode and consisted of 60wt.% silicon, 30wt.% graphite, 2 wt.% carbon black and 8wt.% CMC. Typical loading of the active material was 0.8-1.0 mg/cm2. 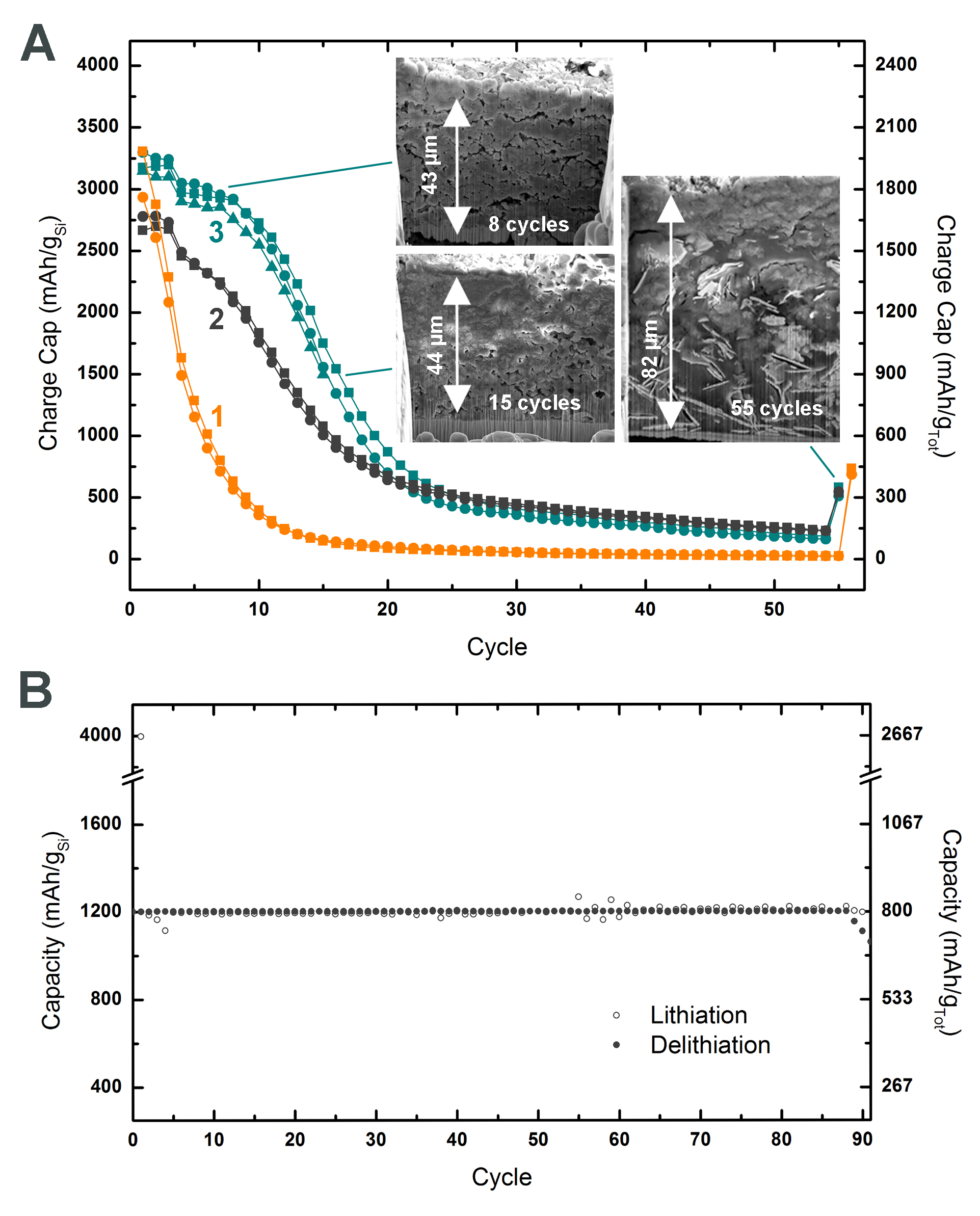