Core-shell structured catalyst is a promising candidate for the decrease in usage amount of an expensive Pt cathode catalyst for PEFCs. Adzic and his co-workers demonstrated that carbon supported Pd core-Pt shell structured catalyst (Pt/Pd/C) exhibits higher ORR performance relative to that of a commercial Pt/C catalyst [1] and that the Pd core dissolves out during an accelerated durability test (ADT) using potential cycling [2]. We have recently reported that ORR activity of the Pt/Pd/C catalyst synthesized with a modified Cu under potential deposition (Cu-UPD) and a Pt replacement processes is enhanced with the ADT performed at 80°C [3, 4]. After the ADT, morphology of the Pt/Pd/C catalyst changed into spherical shape and mean diameter of the catalyst decreased associated with an oxidative dissolution of the Pd core. It was presumed that the enhancement of the ORR activity was caused from decrease in number of low-coordinated Pt atoms by rearrangement of the surface Pt atoms with the ADT. Interestingly, the core-shell structure was retained even after the ADT. In this study, carbon supported PtPd alloy catalyst (PtPd/C) was prepared through one-pot synthesis and change in the ORR activity of the catalyst by the ADT at 80°C was investigated in comparison with that of the Pt/Pd/C catalyst.

Pt/Pd/C catalyst was synthesized with modified Cu-UPD and Pt replacement processes [3]. Carbon supported Pd core (Pd/C, 4.2 nm, 30 wt.%) was dispersed 0.05 M H2SO4 containing 0.01 M CuSO4 and stirred under Ar atmosphere with co-existence of Cu mesh, by which Cu shell was formed on the Pd core surface. Then, the Cu mesh was removed and K2PtCl4 was added to replace the Cu shell with the Pt one, giving the Pt/Pd/C catalyst. PtPd/C alloy catalyst was prepared with one-pot reduction method. H2PtCl6 and Na2PdCl4 were dissolved into DI water and pH of the solution was adjusted at 3.5 by NaOH, followed by addition of a carbon support (Ketjen black EC 300J). The solution was stirred at 60°C in air and NaBH4 was added in drop-wise, forming the PtPd/C alloy catalyst [5].

XRD patterns of the catalysts are shown in Fig. 1. All samples exhibited characteristic diffraction patterns of fcc structure. In PtPd/C catalyst, composition was Pt51Pd49 (in at.%) and (220) diffraction peak angle was close to that of the Vegard’s law (dotted blue arrow), indicating that Pt and Pd are well-mixed and form alloy particle. In Pt/Pd/C catalyst, (220) diffraction peak angle did not change after Pt shell formation and peak symmetry was retained. TG and XRF analyses showed that the Pt shell formed on the Pd core surface corresponds to 1.1 times of Pt monolayer.

This work was supported by NEDO Japan. 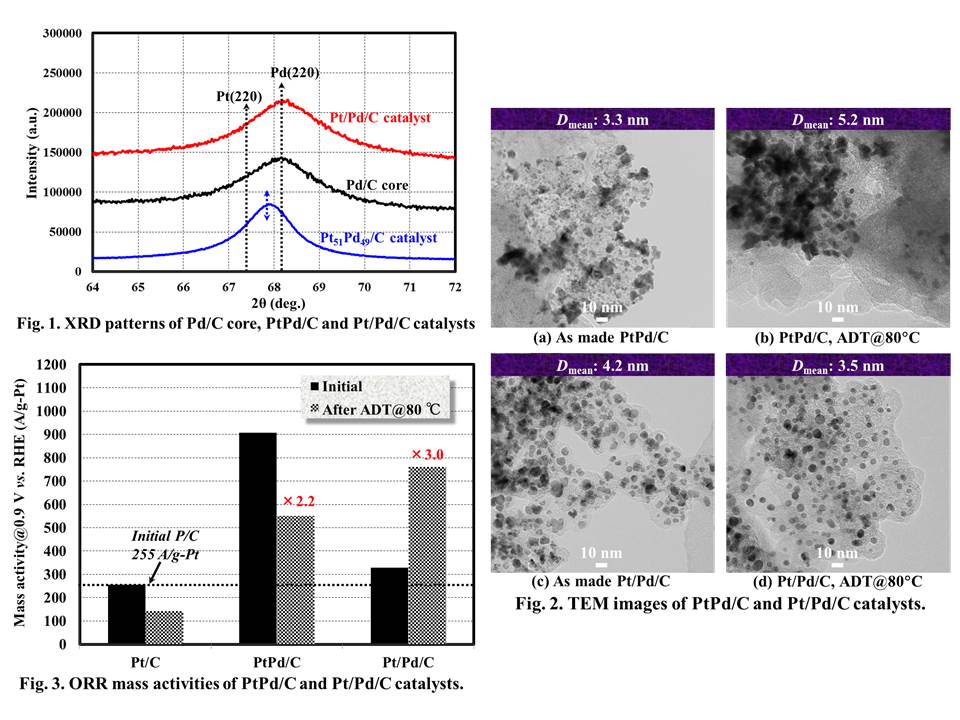