Expo Center, 1st Floor, Universal 3 (Moon Palace Resort)
H. Ĺsheim (Norwegian University of Science and Technology), T. Aarhaug, A. Ferber, O. S. Kjos (SINTEF, Norway), and G. M. Haarberg (Norwegian University of Science and Technology)
Perfluorocarbons (PFCs) are potent greenhouse gases (GHG) with long lifetimes and high global warming potentials, giving them a high capacity to inflict harm on the environment.  The aluminium industry is one of the bigger emitters of these gases and consequently a lot of effort has been put into understanding the mechanism behind the emissions.

Aluminium is produced electrochemically by consuming alumina (dissolved in molten cryolite) and carbon. In addition to aluminium this also produces CO2 with a fraction of CO. The reversible potential for the reaction is about 1.2 V, but due to overpotentials related to the electrodes and IR drops in different parts of the cell, especially from the electrolyte, a regular industrial cell needs to operate at a much higher voltage (3.8 – 4.5 V). If the alumina concentration in the electrolyte gets too low the polarisation increases which opens the possibility for other anode reactions, like the production of the PFC gases CF4 and C2F6. The phenomenon is termed anode effect (AE) and traditionally when this occurred the voltage could raise to levels of 20 V or higher, and the current distribution over the anodes would become erratic.

In recent years, however, these PFC gases have been discovered at several large, high kA, smelters in China [1-3]. It has been proposed that less uniformity in dissolved alumina for larger cells may elevate individual anode overvoltage sufficiently to produce PFC. The large size gives the cell the ability to distribute the current of the PFC producing anode to the remaining anodes without passing the critical current density.

Low cell voltage (LCV) PFC formation was monitored after the dry scrubber on a train of 28 cells at a relatively small Norwegian smelter running at approximately 215 kA. For this work a fourier-transform infrared spectrometer was used. Equipped with a mercury cadmium telluride (MCT) detector and retrofitted with a 35 m / 11 l measurement cell it was possible to get the detection limit down in the low ppb range needed for this study.

It was discovered that also small cells could emit PFC that was not directly related to the conventional anode effect. Low cell voltage PFC was found to be discrete emissions mostly in the form of CF4; however, the results indicate that C2F6may also form outside the main anode effect. The emissions can be short lived and self-terminate, but they can also endure for a substantial amount of time and end up in a conventional anode effect, as can be seen from Figure 1. 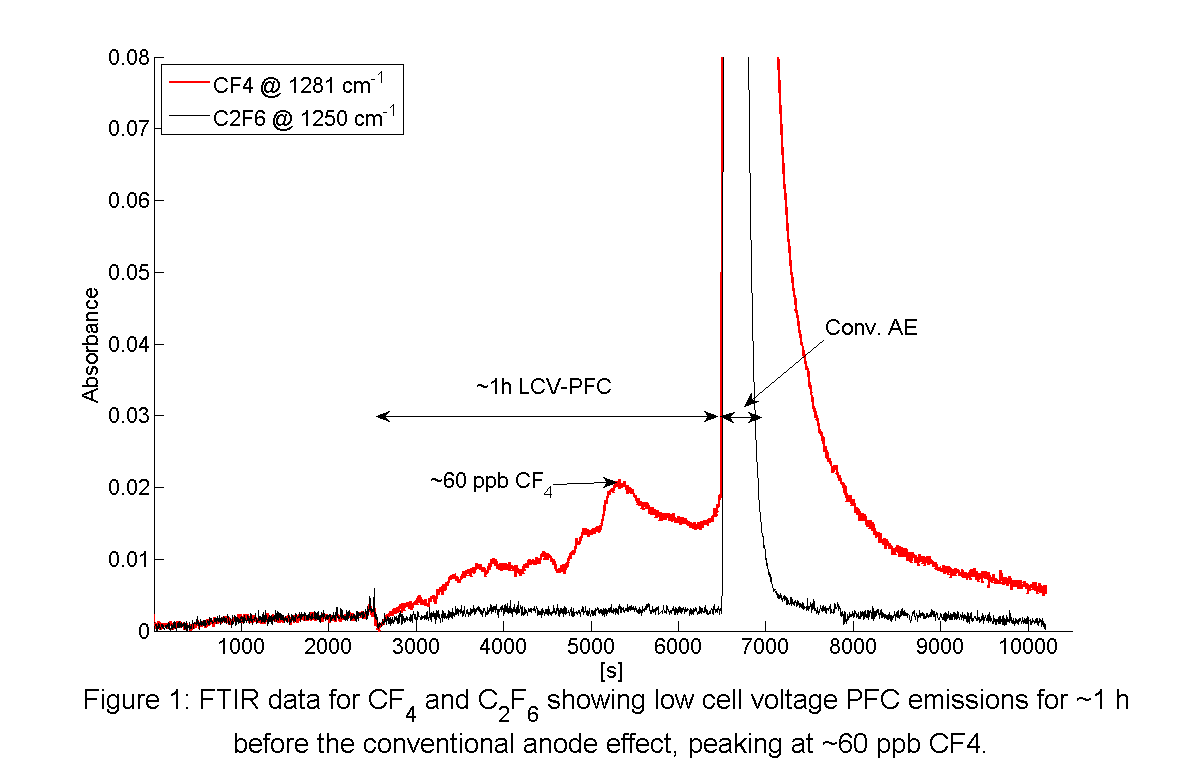