1578
Structural and Electronic Properties of Carbon-Nanotube/Graphene Junction: A First-Principles Study

Expo Center, 1st Floor, Center and Right Foyers (Moon Palace Resort)
B. Akdim (Air Force Research Lab.) and R. Pachter (Air Force Reseach Lab)
Recently, a junction made of single wall carbon nanotube and a single sheet of graphene has been fabricated on silicon oxide substrate [1]. Their Raman spectroscopy measurements showed an upshift of the radial breathing modes and G peaks of the nanotube attributed to the charge transfer (CT) at the junction. The direction of the CT was determined from the intensity ratio of 2D/G of graphene, decreasing as a function of G Raman shift, which suggest n-doping of graphene due to the presence of nanotube. Their theoretical work, using molecular dynamics simulation, ruled out the strain on carbon nanotube to be the cause of the Raman upshift.

In this work, we perform density functional theory calculations, for a model of C(13,7)/graphene junction, as suggested in Ref. [1]. Figure-1 shows the adopted model with 1132 carbon atoms, rendering the conventional first-principles methods that scale as O(N3) impractical. Therefore, we carried out the optimization of the large model using self-consistent density functional tight-binding method (SCC-DFTB), provided within CP2K package [2]. The resulting structure was then used to perform a single point energy calculation within density functional theory (DFT), adopting B97-D functional [3, 4], suitable for non-covalent interactions. The DFT is based on QUICKSTEP [5], which is an order-N method implemented in CP2K.

Our preliminary results indicate that the charge transfer for a suspended nanotube/graphene system takes place from graphene to the carbon nanotube. To ascertain these results, we built a small material model consisting of the armchair C(10,10) and graphene junction, and performed calculations with the VASP package using optPBE [6] functional, which also includes the dispersion to account for van der Waals interactions. The results for the small model suggest an n-doping of carbon nanotube. Our findings are in agreement with the work of Cook et al. [7] for a C(8,0) adsorbed on a flat graphene junction. As can be seen, all the theoretical work seem to be in disagreement with the charge transfer direction, suggested in Ref. [1], which may be due to the pristine nature of the models.

In this paper we will report on structural and electronic properties of a CNT/graphene junction, for pristine models as well as doped systems with impurities, where charge re-distribution at the junction will be outlined. 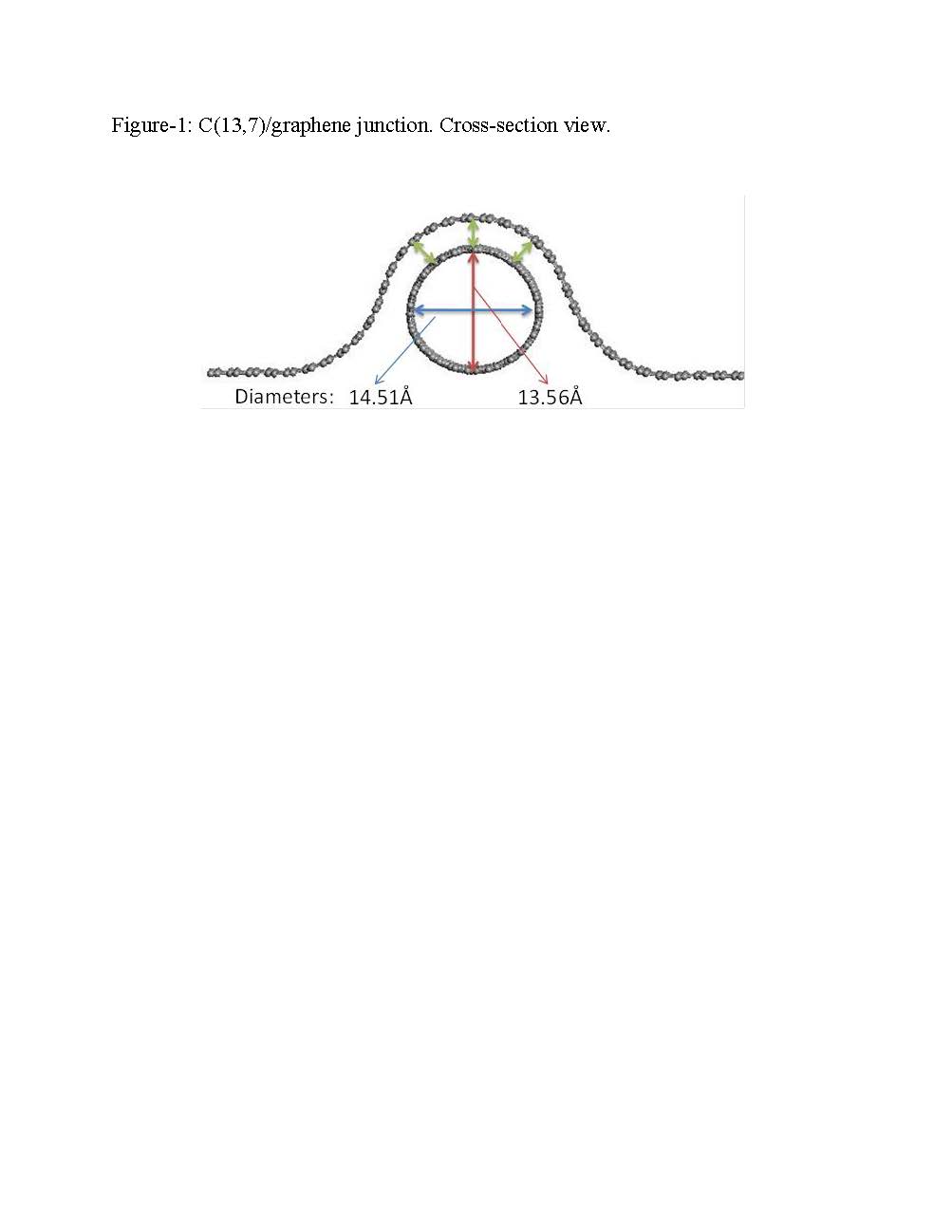