Expo Center, 2nd Floor, Universal Ballroom (Moon Palace Resort)
A. Omosebi (University of Kentucky), X. Gao (Center for Applied Energy Research, University of Kentucky, Lexington, Kentucky 40511, USA), J. Landon, K. Liu, A. M. Cramer, and Z. Li (University of Kentucky)
Wastewater treatment and freshwater production are integral to sustaining an increasing global population. Presently, techniques like reverse osmosis (RO), and multi- stage distillation (MSD), which are extensively used for water cleanup are cost and energy intensive due to an operational focus on removing a majority constituent water from salts. Capacitive de-ionization (CDI) is an emerging technique for water treatment whereby dissolved ionic content in the bulk solution is stored in highly porous electrodes upon the application of an electric field, i.e., removing salts from water. When the potential is released, a concentrated waste stream is produced (1, 2).  A lot of research has been devoted to optimizing the electrodes, usually carbon to possess high surface area, large porosity, and high conductivity for use in CDI. Other key research areas include membrane assisted capacitive deionization and chemically functionalized electrodes. While CDI has been touted as an efficient process for brackish water desalination, there remains intensive energy consumption to keep the traditional CDI process from becoming a transformational technology, and reverse osmosis continues to be more economical when desalinating higher concentration streams such as sea water.  Many authors have discussed the possibility of parallel CDI operation with energy recovery to reduce energy requirements. However, beyond discharging a charged CDI cell into a resistive load, there has been little demonstration of CDI to CDI energy recovery.  The interfacing of CDI cells offers not only the ability to lower the energy requirements, but also the possibility of semi-continuous CDI operation. In this work, parallel CDI cells are integrated with a multi-input bi-directional DC/DC converter to show active energy recovery from a discharging cell and subsequent deionization of a secondary cell using energy stored in the initial charged cell.

Deionization experiments are conducted by closed-loop recirculation of a saline stream through the CDI cell to achieve a batch-mode configuration. The test system is equipped with inline conductivity probes for continuous monitoring of concentration. Along with the converter, the deionization system is connected to a power supply to compensate for losses and maintain operation. Initial testing was done by charging a primary cell at 1.2 V (Figure 1), and then directly connecting to a secondary cell. There were 12 and 7 µS/cm drops in concentration for the primary and secondary cells respectively. Future studies will track inter-cell energy transfer and show recovery of more than 50 % of the energy stored in the initial cell using this integrated CDI-converter setup.

The authors are thankful for the support of the State of Wyoming Advanced Conversion Technologies Task Force for supporting this research. 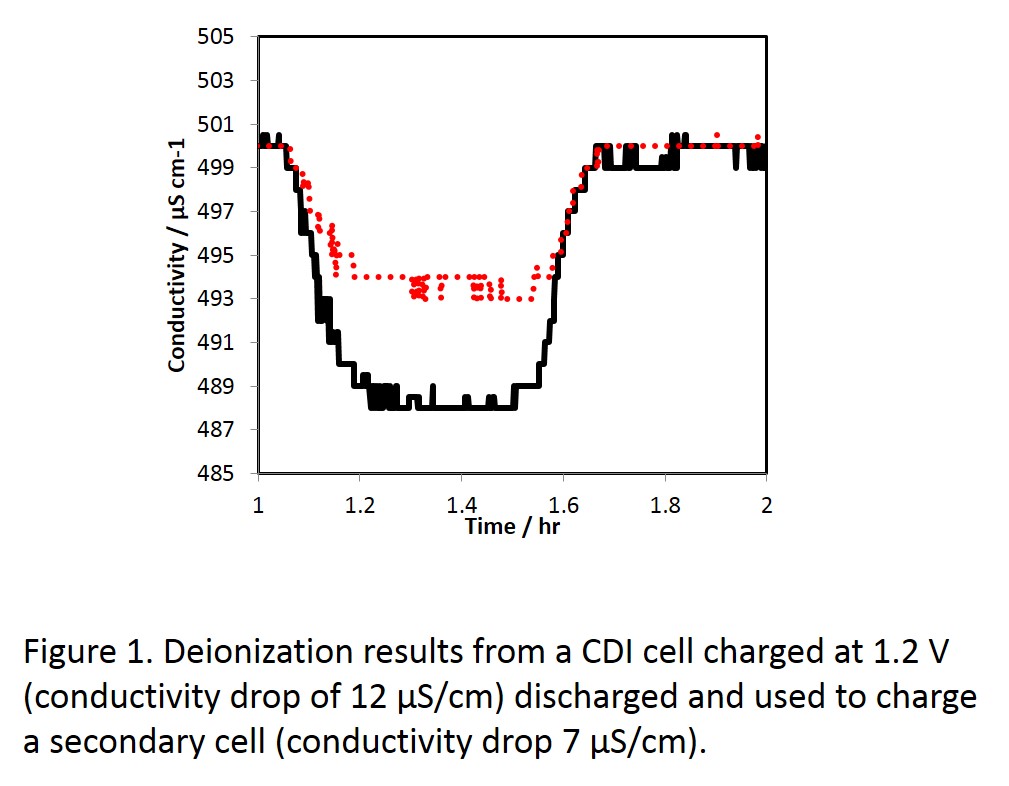