2094
In Situ TEM Study on Au Mediated Growth of NiSi2 in Si Nanowire: A Vapor-Liquid-Solid Analogy

To observe the growth, we dispersed VLS grown <111> Si NWs on 30 nm TEM silicon nitride membranes with pre-evaporated Ni dots.  In-situ TEM heating observations, including real-time video recording, of the interaction between the Au-terminated Si NW and the Ni nanodots were conducted at 700 ºC as a function of time. Figure (a) is a TEM image showing a segment of NiSi2 grown by the distinct gold mediation mechanism, and Figure (b) shows the HR image at the NiSi2/Au and Au/Si interfaces. At the very beginning of the process, the Au-Si tip forms a liquid alloy at the elevated temperature (Figure c).  Then, Ni atoms dissolve from the Ni nanodots into the Si NWs and diffuse interstitially to and dissolve in the liquid alloy (Figure d).  Upon super-saturation of Ni and Si  inside the Au-Ni-Si alloy, a single {111} terminated octahedral NiSi2 nucleus forms in the middle of the liquid alloy (Figure e) and continues to grow until it is large enough to be pinned at the inner surface of the oxidized Si NW.  Meanwhile, the Au-Ni-Si liquid alloy starts to move from the tip towards the other end of the Si NW, and catalytically transforms Si to NiSi2 along the moving path (Figure f).  Here, two concurrent processes mediated by the moving Au-Ni-Si liquid layer occur: (1) progressive dissolution of the Si NW at the liquid alloy/Si (111) interface, and (2) continuing supply of Ni so that the precipitation of NiSi2 phase occurs at the liquid alloy/NiSi2 interface, which is closer to the tip of the NW. In a similar fashion to the VLS growth of Si, the NiSi2 nucleates at {110} type facets and propagates on its (111) planes.  This constitutes a SLS growth process for the NiSi2 phase. With SLS growth, the NiSi2 phase occurs at lower temperatures when mediated by the liquid alloy, compared with the temperatures used in thin film reactions.  In contrast NiSi2 is found to nucleate homogeneously in Si NWs without Au mediation only when the temperature is above 800 ºC.

Figure captions: (a) TEM bright field image showing NiSi2 forms from the tip of the nanowire with a Au alloy layer moving towards the opposite end. Scale bar is 100 nm (b) HRTEM image of the area around Au. The reaction front is NiSi2 (111) plane that maintains a (111) interface with the solidified Au as demonstrated in the inset FFT patterns. Scale bar is 5 nm. SLS growth process: (c) Ni interstitial diffusion through a Si medium (NW) and accumulation in the Au-Si eutectic alloy. (d) Formation of a liquid Au-Ni-Si ternary alloy at the Si NW tip. (e) Nucleation and growth of a single octahedral NiSi2 crystallite inside the liquid ternary alloy. (f) Continuous dissolution of the Si NW by the eutectic ternary that moves down through the Si NW and concurrent growth of NiSi2 on the other side of the eutectic in the steady state. 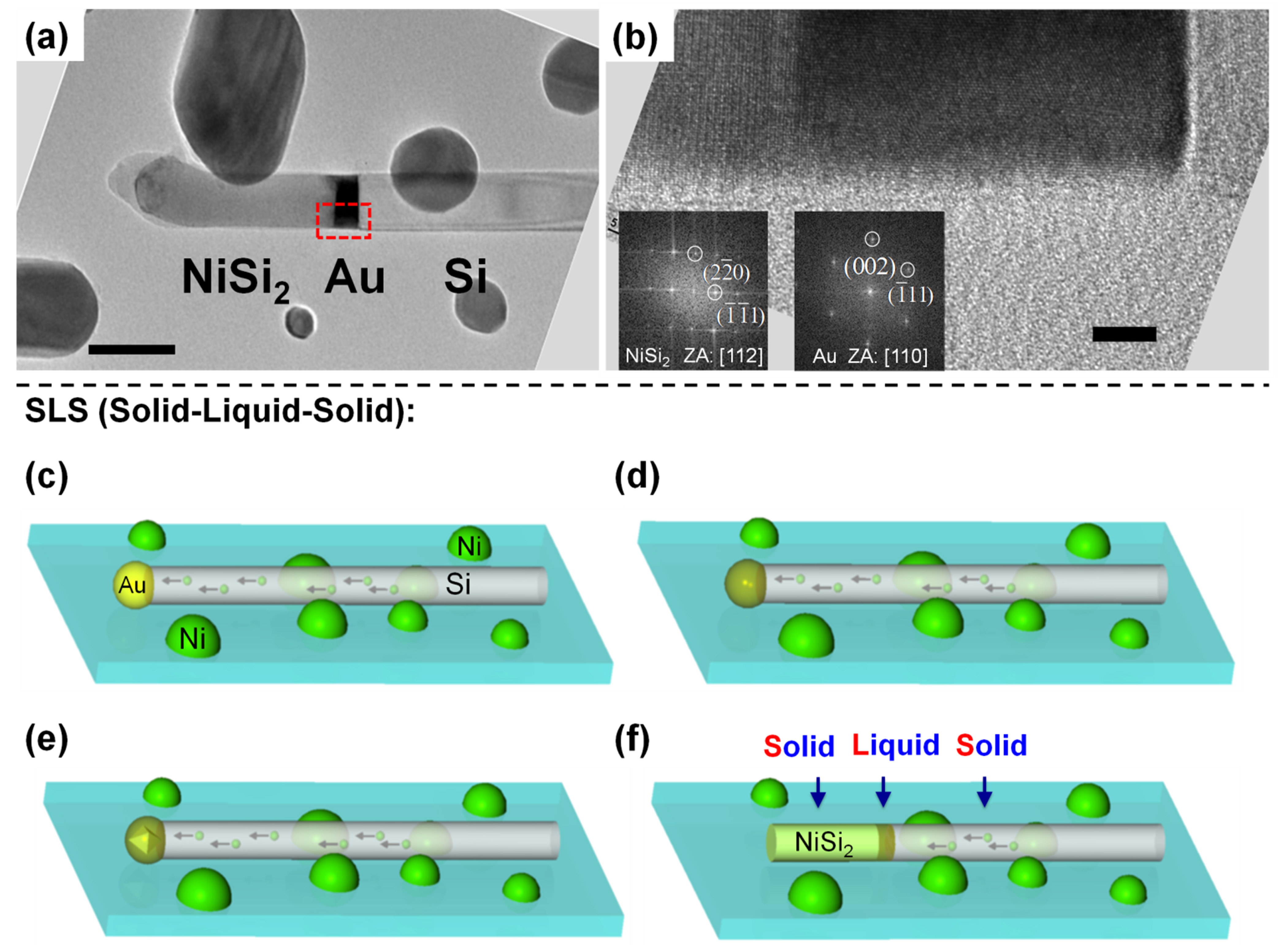