A critical hurdle to the commercialization of SOFCs is the ability to reduce system cost.  A lower temperature would allow for the use of less expensive interconnect materials, reduction of the start-up time, longer mechanical and chemical stability, thus reducing total system cost.  However, lowering the operation temperature of SOFCs is difficult due to ionic conductivity limitations of electrolyte materials.  For example, yttria-stabilized zirconia (YSZ) is a widely used electrolyte material but its ionic conductivity is very low at temperatures below 700⁰C.

It has been demonstrated that erbium stabilized bismuth oxide (ESB) has one to two orders of magnitude higher ionic conductivity than YSZ due to ESB's high oxygen vacancy concentration.  Furthermore, we have developed dysprosium-tungsten doped bismuth oxide (DWSB) which has an even higher conductivity and stability at lower temperatures as compared to ESB.

In this presentation, we report our recent progress in developing DWSB and other high performance double doped bismuth oxide (DD-SB) electrolytes for SOFCs.  In order to further enhance the performance we developed nano-sized DD-SB powder using  wet chemical methods and investigated the effect of powder morphology on the performance of DD-SBs using AC impedance spectroscopy.

DD-SB powders were prepared via conventional solid state and wet chemical methods.  Solid state (SS) powder was fabricated by milling Bi2O3 and MOx dopants in a HDPE mill for 24h.  The milled powder was calcined at 800⁰C for 16 hours to achieve the desired phase.  To make coprecipitated (CP) powder, appropriate amounts of Bi(NO3)3-xH2O and dopant metal nitrate salts were dissolved in nitric acid and for DWSB (NH4)6W12O36-xH2O was dissolved in NH4OH.  The acid solution is added drop wise to the base solution while stirring with a magnetic stir bar.  The precipitate was washed in DI H2O, filtered, dried at 100⁰C, and fired at 550⁰C to achieve the appropriate phase.  Additionally, glycine nitrate combustion is used.  Appropriate amounts of the metal salts and NH2CH2COOH (glycine) are dissolved in DI H2O and 10 vol% HNO3.  The solution is evaporated at 100 °C.  The resulting gel is heated to 350 °C until auto-ignition occurs.  The resulting ash is collected and fired at 550 - 650 °C to achieve the desired phase.

The phase analysis of the powders was performed by means of X-ray diffraction (XRD).  BET surface area, and particle size calculations were used to quantify the geometric powder properties.  SEM images were taken to observe the morphology of the powder.

Fig.1 shows an example of a deposited thin film of wet chemically synthesized DWSB onto a pre-fabricated anode supported NiO-GDC with a GDC electrolyte. 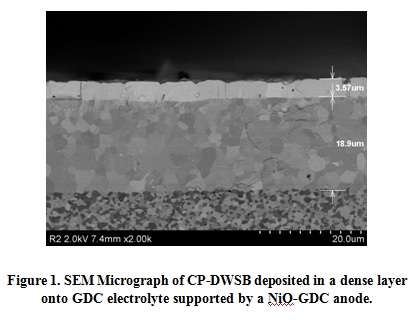