Sunrise, 2nd Floor, Star Ballroom 8 (Moon Palace Resort)
J. Biesdorf, P. Oberholzer, T. J. Schmidt, and P. Boillat (Paul Scherrer Institut)
Polymer electrolyte fuel cells (PEFCs) are highly suited for electricity production of stationary and mobile applications, due to their high energy densities without production of toxic exhaust gases. However, before their commercialization, the efficiency has to be increased and occurring performance losses (activation-, ohmic- and mass-transport-losses) have to be reduced. In order to minimize mass-transport-losses (MTL), gas-diffusion layers (GDL) are integrated between the electrodes and the flowfields (1,2), facilitating a homogeneous supply of the reactant gases to the electrodes, as well as an improved evacuation of the product water.

Neutron radiography (NR) is an imaging technique to visualize liquid water inside PEFCs (3-5). It offers the advantage of good transparency of housing materials (e.g. aluminum) with a high contrast for hydrogen containing species like liquid water. Using a high resolution setup (5), time dependent water distributions (exposure time of 15s) were visualized inside the flow fields (FF) and GDLs of several small scale fuel cells. In order to evaluate the impact of the water distribution onto the performance, occurring mass transport losses were investigated by pulsing Helox (mixture of 79% He and 21% O2) and pure Oxygen under continuous operation with air (6). By comparing the voltage during the gas pulse with the base voltage, the pulsed gas analysis(PGA) method delivers specific indicators of mass transport losses caused by bulk and non-bulk diffusion losses.

With the multicell setup (5), we are able to operate six differential fuel cells (active area of 1cm2) under identical operation conditions (temperature, humidification, pressure, and currents). In order to study the influence of hydrophobic coatings (PTFE) on mass transport losses, different cell assemblies with variable GDLs (Sigracet 24 with MPL, SGL) with 0, 5 or 20wt% PTFE have been investigated on the cathode side.  The measurement protocol at the ICON beamline of PSI (7) consisted of systematic variations of different cell temperatures, relative humidities, pressures, and currents.

Figure 1 depicts the continuous operation of the cells at 1A/cm2under dry conditions (t<0) and full humidification (0<t<120). It can be clearly seen that a lack or an excess of PTFE in the cathode GDL leads to an important impact on the performance as well as on its stability. Although the operation with 20wt% PTFE is stable, the resulting mass transport losses are highly increased, in particular for full humidification. Without PTFE, no stable operation is reached during 2h and the losses rise dramatically.

Neutron radiography enables to clarify the sources of mass transport losses. In figure 2 (a-c), one can see that the water distribution is strongly dependent on the PTFE content inside the cathode GDL. Without PTFE (figure 2 (a)) water accumulates under the ribs of the flow channels, but also under the flow channels itself. This leads to a successive increase of the MTL, as the water is blocking the pathways of the reactant gases. An exceeding amount of PTFE (figure 2 (c)) leads to little water accumulation inside the GDL with free pathways for the oxidant. However, the increased MTL in figure 1 cannot only been explained by the reduced porosity of the GDL. In fact, based on the higher amount of PTFE in figure 2 (c), water is expected to accumulate in a more unfavorable morphology.

Figure 1. Mass transport losses at 1A/cm2 measured with the PGA method for different cell assemblies. Gas flow humidification was changed from 40% to 100% at t = 0. 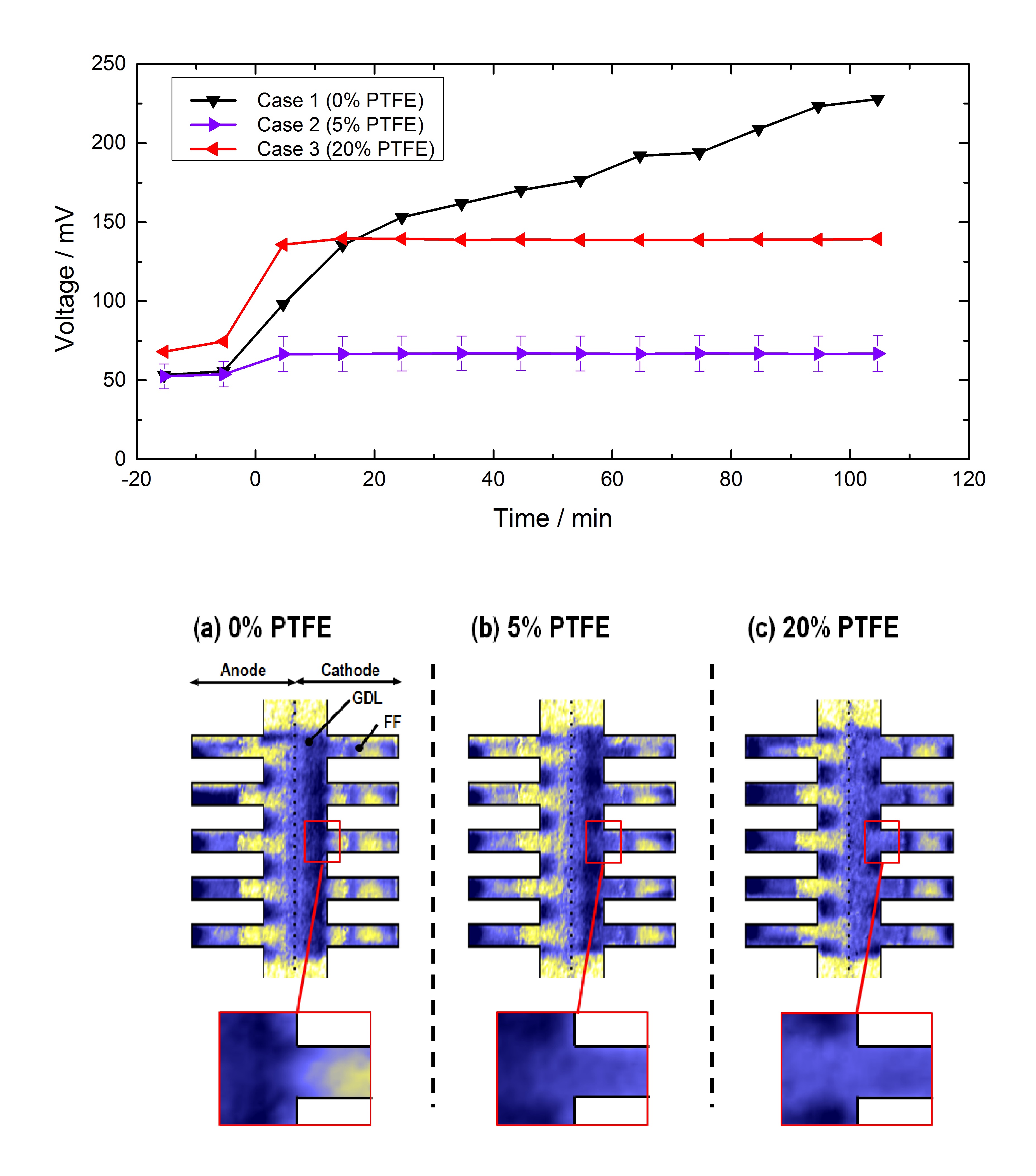