Discharge of an MnO2 cathode involves many reactions, both chemical and electrochemical, and only certain of these are fully reversible. For example the proton/electron insertion to MnOOH is usually assumed reversible. However, a subsequent solution-phase reduction to Mn(OH)2 can then lead to Mn3O4, which is considered irreversible.2 Confining the cathode cycling window to a well-controlled state-of-charge range involving only MnOOH can in theory result in perfect reversibility. However, current distributions can result in locally high reaction rates in the electrode, and chemical reactions can be challenging to control, as they do not respond directly to the potential.

We report studies of long-term cycling with prismatic zinc-manganese dioxide batteries in which zinc was in excess, and the cycling depth was set as a fraction of the MnO2 capacity. Cycling results are shown in Figure 1 for a collection of cells in which the cycling depth and discharge rate were varied. Cell energy efficiency was initially between 80-90% for all cells, and was higher when a lower fraction of the MnO2 capacity was cycled. The discharge end voltage was taken as a general metric of cell health, and in all cases evolved over time, generally decreasing with cell age. Under certain profile conditions, cells cycled uninterrupted for years with stable efficiency. In Figure 1 cell (2) exceeded 3000 cycles, and cell (3) attained 4000 cycles.

In the early stages of cycling, a selection of cells were halted and material changes within the cells were analyzed. This information was combined with that from post mortem analyses of decommissioned cells such as those in Figure 1. The goal was delineation of the processes that most frequently lead to cell failure, and knowledge of the rates at which these processes occur. In most decommissioned cells, anode, cathode, and separator were all found altered. In particular we tracked the formation of ZnMn2O4 or hetaerolite in the cell cathodes, to assess the impact of this byproduct on cycling. 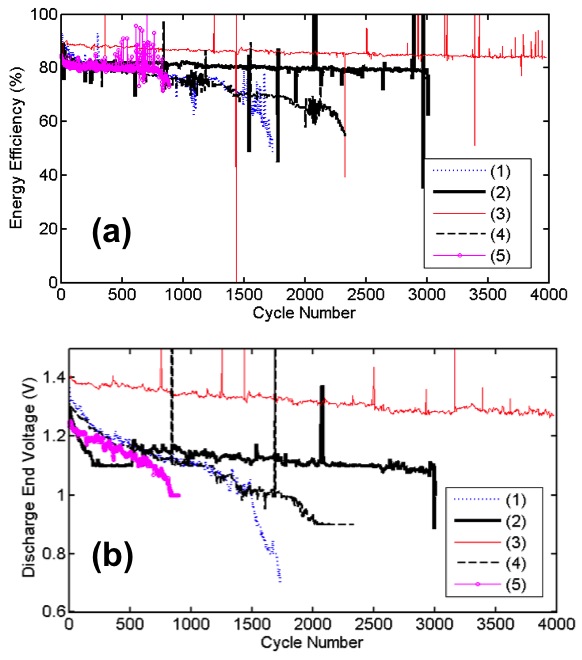