Sunrise, 2nd Floor, Galactic Ballroom 2 (Moon Palace Resort)
Y. Li, R. Raghavan, N. Wagner, and C. Chan (Arizona State University)
Due to its high theoretical specific capacity, silicon has been the subject of intense interest and research as a high energy density anode for lithium-ion batteries. In the last several years, nanostructured silicon has been shown to be very effective for relieving lithiation induced strain and avoiding pulverization, which can lead to capacities > 3000 mAh/g, a 10X improvement over the commercially used graphite anode.  However, despite this impressive proof-of-principle, nanostructured silicon can still suffer from degradation over long cycling times due to several reasons such as collapse of the nanostructure, increased porosity, structural instability, and insufficient surface passivation.     The work to be presented here will introduce our investigations into the lithiation of silicon clathrates, (fullerene-like materials where silicon atoms are arranged in cage-like structures) that have been shown, through first principles calculations, to be able to allow lithium insertion without a large volume change or pulverization [1].

In our group, we have investigated silicon clathrate materials, which have cage-like structures, as an anode material of Li-ion battery. Our studies on type II clathrate based on Na24Si136 show that lithium insertion is energetically feasible inside silicon cages that are fully occupied by other guest atoms. However, large amounts of lithium insertion cause a transformation between from the clathrate structure to an amorphous silicide and eventually Li15Si4 [2].

This presentation discusses the structure and electrochemical performance of ternary Ba-X-Si type-I clathrate (where X = Cu, Al). Polycrystalline silicon clathrate materials are synthesized using thermal annealing and arc-melting methods. Electrochemical and structural analysis show these cage-like silicon structures have the ability to allow lithium insertion and removal without a large volume change or pulverization. Lithiation/delithiation of silicon clathrate anodes will be presented comparing to that of diamond cubic and amorphous silicon. Ex-situ X-ray diffraction, X-ray photoelectron spectroscopy, and nuclear magnetic resonance are also employed to understand the structural changes upon lithiation and delithiation. 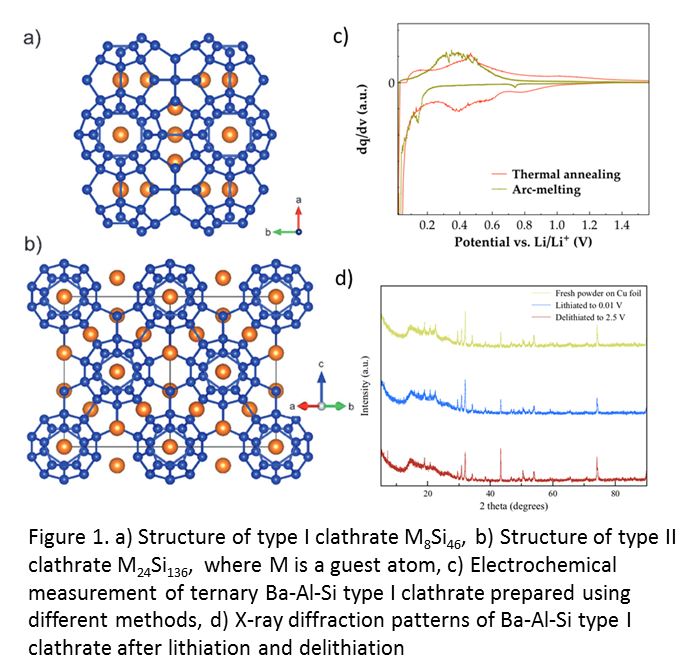