Expo Center, 1st Floor, Universal 12 (Moon Palace Resort)
Q. Huang (IBM, T. J. Watson Research Center)
One of the main cost in the silicon solar cell manufacturing is the silver paste for the screen-printed front-side grids. Furthermore, the aspect ratio and the conductivity the silver lines have been limited by the screen-printing process and the composite nature of the paste. The low aspect ratio and the low conductivity of the grids dictate a limitation of footprint of the grids and therefore a limitation of cell efficiency. In addition, the process of screen-printing involves high risk of wafer breakage, which further contributes the final cost of solar energy.

Electroplated Cu together with Ni silicide contact layer was proposed decades ago as an alternative for the front-side grid.[1] Light induced electroplating[2-4] was also invented to create minority carriers at the PN junction, allowing the electroplating to take place without reverse biasing the PN diode. While the a lot of efforts have been focused on the development of the manufacturing processes, few studies are available on the long term reliability of the Cu grid.[5]In this paper, the long-term thermal stability of the Cu/Ni metallization on was studied using Si solar cells fabricated with CMOS grade Si substrates.

Solar cells in real operation in the field will be challenged not only by heat, but also by moisture, radiation, and other natural stresses. While the reliability tests for Si solar cells with screen-printed Ag grid have been standardized already, the impacts of these stress elements are unknown to the Cu grids and are typically convoluted. However, the further formation of the silicide that could finally penetrate through the emitter and the diffusion of the Cu across the silicide into the Si are expected to be the major concerns for the Cu grids under thermal stress.

In this study, solar cells were annealed at different elevated temperatures to speed up the degradation. Degradation behaviors of the grids after up to 3 years were studied. Different materials were also evaluated and compared for improvement in the grid reliability.  For example, figure 1 shows a comparison between the solar cells plated with pure Ni or NiCo alloy before the silicidation. The presence of Co in the silicide apparently improved the stability of the final grids during the stress tests at elevated temperature. Further detailed discussion will be provided in the talk. 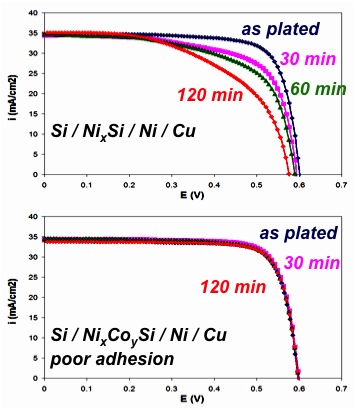