Issues associated with the vanadium RFB include a low cell voltage (1.26 V), the use of expensive membranes including Nafion®, and the relatively high cost of vanadium, leading to expensive electrolytes.2 The development of anolytes with higher reversible potentials than VO2+/VO2+, along with electroactive species featuring higher natural abundance and lower cost than vanadium, represents an attractive alternative to vanadium-based anolytes. Flow battery  anolytes based on the Mn2+/Mn3+ redox couple have been reported in the literature, and the high standard electrode potential of Mn2+/Mn3+ (1.51 V) has been utilized in manganese anolyte (Mn2+/Mn3+)/vanadium catholyte (V2+/V3+) redox flow batteries, featuring a theoretical open circuit voltage of 1.77 V.2,3 The usage of manganese anolytes can lead to higher cell voltages (Figure 1) and cheaper anolytes, but the disproportionation reaction of Mn3+ to Mn2+ and MnO2 is a technical issue that needs to be resolved in order for manganese-based anolytes to find widespread utility in redox flow batteries.2 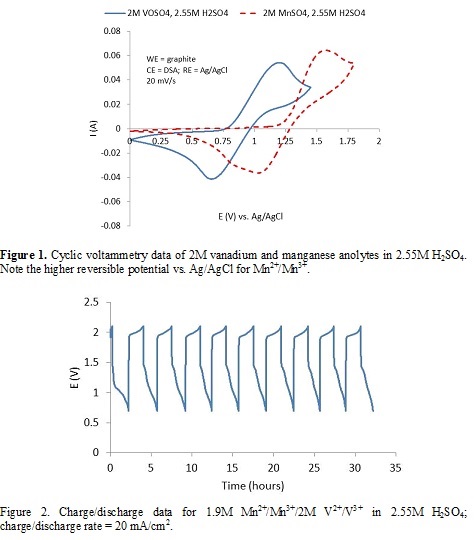