Sunrise, 2nd Floor, Jupiter 1 & 2 (Moon Palace Resort)
T. C. Jao, T. Sasabe, P. Deevanhxay, S. Tsushima, and S. Hirai (Tokyo Institute of Technology)
In proton exchange membrane fuel cells (PEMFCs), appropriate water management is critical to achieve high power density operation with increased robustness. Proton exchange membranes (PEMs) require sufficient hydration to fulfill its function as proton conductor, while flooding at the cathode side can hamper the transport of reactant, resulting in deterioration of cell operation. Liquid water transport and accumulation should be affected by materials impregnated in membrane electrode assemblies (MEAs) and this causes variation of cell performance. This motivated us to investigate effects of impregnated materials in MEAs on liquid water accumulation behaviors and resultant cell performance. For this purpose, soft X-ray radiography has been proof it is a powerful incitement for observing liquid water in PEMFCs because of the high spatial and temporal resolution. [1-5]

In this study, we focused our attention on micro porous layers (MPLs) with vapor growth carbon fiber (VGCF, Unitetek international co. LTD, Taiwan) impregnated in MEA, because VGCF-modified MPLs have been shown for better cell performance especially in high current density operation, suggesting an improvement on liquid water transport [6]. We first examined polarization curves of two types of MEAs with or without VGCF in MPL. In Fig.1, we observed better cell performance with a MEA with VGCF-modified MPL than those with a conventional MEA without VGCF. In the experiment, we fabricated VGCF MPL coated on gas diffusion substrate (SIGRACET® 24BA). We also used commercial gas diffusion layer (SIGRACET® 24BC) for comparison. In both MEAs, we fabricated catalyst coated membranes (CCMs) by decal transfer method. Nafion® 212 had been selected as the membrane and the same batch of catalyst layer with 0.27mgPt cm-2 loading had been used. The hydrogen and air were fed at 200mL min-1 and 500mL min-1 for a 5cm-2 (23 mm x 23 mm) active area normal cell, respectively. The channel width and depth were 1.0 and 1.0 mm. The rib-to-channel ratio was 1 for normal cell. For a X-ray cell (0.03cm-2, 1 mm x 3 mm), hydrogen and air were both fed at 15mL min-1. The channel width and depth were 0.5 and 0.5 mm. The rib-to-channel ratio was 1 for X-ray cell. Cell operating temperature was set at 80°C and relative humidity of the reactants was kept at 92%.

In situ visualization of liquid water distribution in both MEAs by soft X-ray radiography clearly shows their difference as shown in Fig.2. Form the original image Fig.2 (a) and (b), we can found VGCF sample (Fig.2(b)) was difficult to recognize the MPL. The one of the reason is the MPL infiltrate into gas diffusion substrate and another reason is the VGCF MPL maybe has high porosity thus it didn’t absorb much soft X-ray cause to similar intensity of GDL and VGCF-MPL. In both cases (Fig.2(c) and (d)), liquid water was observed under the rib, however, for VGCF-modified MPL at 0.7A cm-2 (Fig.2(d)), less spatially-dispersed liquid water was observed under the rib, while liquid water closed to the catalyst layer was identified in the conventional MEA (Fig.2(c)). At high current density operation (1.2A cm-2), liquid water in the MEA with VGCF was still accumulated closed to the rib. These observations by soft X-ray radiography indicate that VGCF-MPL plays a role to guide liquid water removal in MEAs, which resulted in better cell performance, although physicochemical properties of VGCF-MPL should be unveiled in the future.

This work has been supported by the New Energy and Industrial Technology Development Organization (NEDO) of Japan. 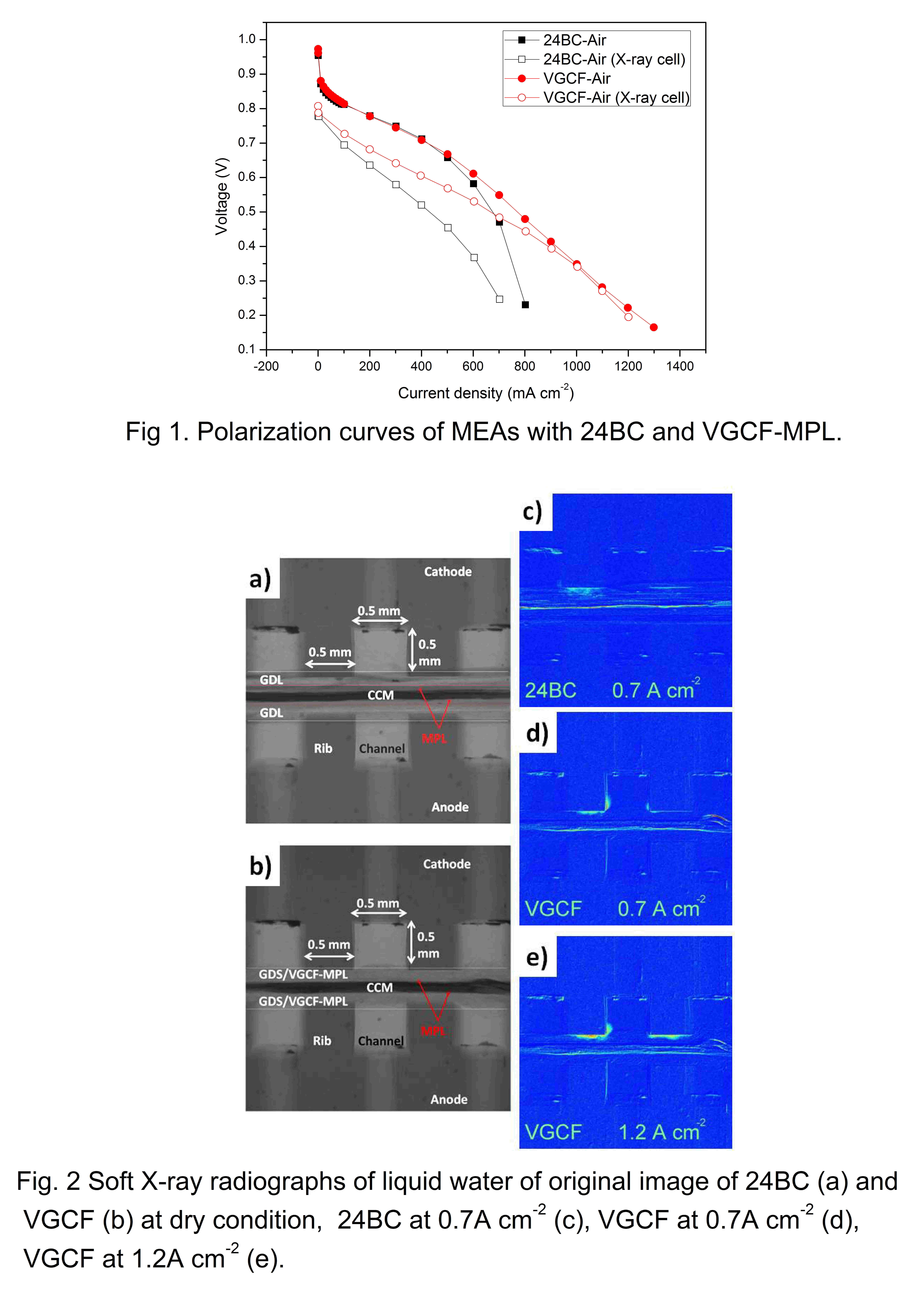