Lithium-ion battery applications have developed from use in mobile devices to use in electric vehicles or stationary devices. For such large systems, long-term operation is required; therefore, understanding the capacity fading mechanism of the cell is important to satisfy desired specifications. Although monitoring the anode and cathode potential using a reference electrode is a fundamental approach, the cell containing the reference electrode sometimes requires excess electrolyte volume due to its restricted cell design. We proposed using a counter lithium metal electrode in two half cells as a pseudo reference electrode, as shown in Figure 1 [1]. This cell configuration can be described as [Cathode|Li]-[Li|Anode], and an array of paired cells was named the “Nico-Ichi”-type cell. We used this technique to understand the capacity fading mechanism of a Mn-based /graphite lithium-ion cell after cycling.

Commercial 8 Ah class Al-laminate pouch cells were cycled at a rate of C/2 at 25 °C. After 2,000 cycles, the cell was discharged at 3.0 V and held for over 10 h before disassembling. After disassembling the electrodes in an Ar-filled glove box, the electrodes were rinsed with dimethyl carbonate (DMC), and one side of the active material was scraped off. The Mn-based cathode and graphite anode were individually assembled into coin-type cells with the lithium counter electrode, which were each externally connected to the cells, as shown in Figure 1. The “Nico-Ichi” cell was operated between the Mn-based cathode and the graphite anode (4.2 V / 2.5 V) at a rate of C/20. The non-degraded cell was also disassembled and reassembled as a reference.

The cell capacity retention after 2,000 cycles was 73 %. Figure 2 shows the cell voltage and the cathode and anode potential profiles of the non-degraded (a) and 2,000-cycled cells (b) during discharge. The obtained “Nico-Ichi” cell capacities exhibited similar trends to those of the lithium-ion cells before disassembly. The cathode potential during discharge terminated at a higher potential for the degraded cell (3.78 V) than the non-degraded cell (3.61 V). We also compared the capacity retention of each electrode both before and after cycling. The obtained capacity retention of the cathode and anode was 95 % and 92 %, respectively. These results strongly suggest that the cell capacity fading was not due to the degradation of either electrode capacity but the misalignment of the operation capacity region between the cathode and anode [2]. In this case, the cathode capacity operating region shifted to a higher charge state because of the irreversible loss of Li at the anode. The consumed Li at the anode was successfully quantified via ICP-OES [3]. Thus, the proposed “Nico-Ichi” cell is a convenient means for monitoring each electrode potential and for estimating the capacity fading of lithium-ion cells. 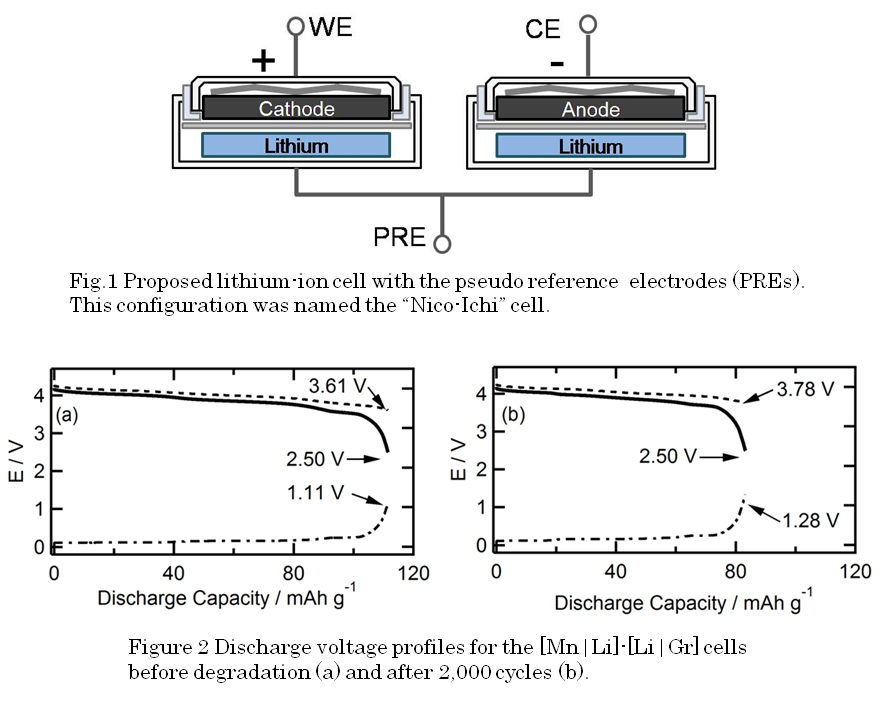