Expo Center, 1st Floor, Center and Right Foyers (Moon Palace Resort)
M. Konno, Y. Sugawara, I. Muto, and N. Hara (Department of Materials Science, Tohoku University)
Polymer electrolyte fuel cells (PEFCs) have attracted attention as a power source of fuel cell vehicles (FCVs). Pt nanoparticle is used for the cathode catalyst of PEFCs. However, Pt catalyst has problems associated with durability. In particular, submonolayer dissolution of Pt catalyst during PEFC operating conditions causes a cell performance loss of PEFCs. In order to decrease the Pt usage, Pt-Co alloy catalyst has been introduced because of it’s the highest catalytic activity among various Pt alloys. A layer formed by dealloying of Co and following Pt condensation in acid treatments is called Pt-skin layer. The Pt-skin layer, which is formed on the Pt-Co surface, contributes to catalytic activity and corrosion resistance of Pt-Co alloy catalyst. Because dissolution of Pt-skin layer on Pt-Co alloy surface causes not only particle growth similar to the case of Pt catalyst, but also degradation of the catalytic activity by Co dissolution, it is important to reveal the corrosion resistance of Pt-skin layer. Dissolution behavior of Pt-skin layer on Pt-Co alloy surface in simulated PEFC cathode environments was investigated in this study.

Pt-Co alloy (molar ratio 1:1) obtained by arc melting was used as specimen. After polishing down to 0.25 mm diamond paste, it was heat-treated under vacuum at 1273 K for 24 hours to remove the work-affected layer, and cooled in the furnace. The surface was immersed in naturally aerated 0.5 M H2SO4 at 298 K for 1 hour as the dealloying treatment. 100 cycles of cyclic voltammetry (CV) at 10 mV·s-1 in the potential range of 0.6 ~ 1.4 V vs. SHE were performed in naturally aerated 0.5 M H2SO4 solution at 298 K as the dissolution test. Au was used as the counter electrode, and Ag/AgCl (3.33 M KCl) as the reference electrode. The cross section of specimen was observed by STEM and analyzed by EELS. The solution after CV was analyzed by ICP-MS.

Figure 1 shows the cross-sectional STEM-HAADF images of Pt-Co electrode surfaces and EELS spectrums before and after the dealloying treatment. Peaks of Co were observed in the energy loss of 790 ~ 800 eV. Before dealloying treatment, Intensity of Co peak at the point of 2 nm from the surface was almost the same as that at 0 nm. Whereas, after that treatment, Co peak at 2 nm was lower than that of 0 nm. This demonstrates that thickness of Pt-skin layer is at least within 2 nm was formed on the Pt-Co alloy surface. Fig. 2 shows cyclic voltammogram of pure Pt and Pt-Co alloy in 0.5 M H2SO4. The CV of Pure Pt and Pt-Co alloy showed the oxide formation peak around 0.9 V and 1.1 V respectively. Furthermore, amount of reduction charge between 0.6 ~ 1.4 V calculated from CV of Pt-Co alloy (389 mC·cm-2) was lower than that of pure Pt (524 mC·cm-2). These results mean that oxide formation of Pt-skin layer is suppressed than that of pure Pt. Amount of Pt ions dissolved from pure Pt during CV was 343 nm·cm-2, and that from Pt-Co alloy surface was 182 nm·cm-2. Thus, amount of Pt ions dissolved from Pt-skin layer was about a half of that from pure Pt. Pure Pt was heat-treated in the same condition as the Pt-Co alloy. This indicates that Pt-skin layer on Pt-Co alloy surface have higher corrosion resistance than pure Pt. Previous study on the dissolution mechanism of Pt reported that Pt dissolution follows the oxide formation.1 Based on this mechanism, suppression of the oxide formation leads to high corrosion resistance of Pt-skin layer.

Figure 1 Cross-sectional STEM-HAADF images and EELS spectrums (a) before and (b) after dealloying treatment. 3 points shown in image a specimen were analyzed by EELS. 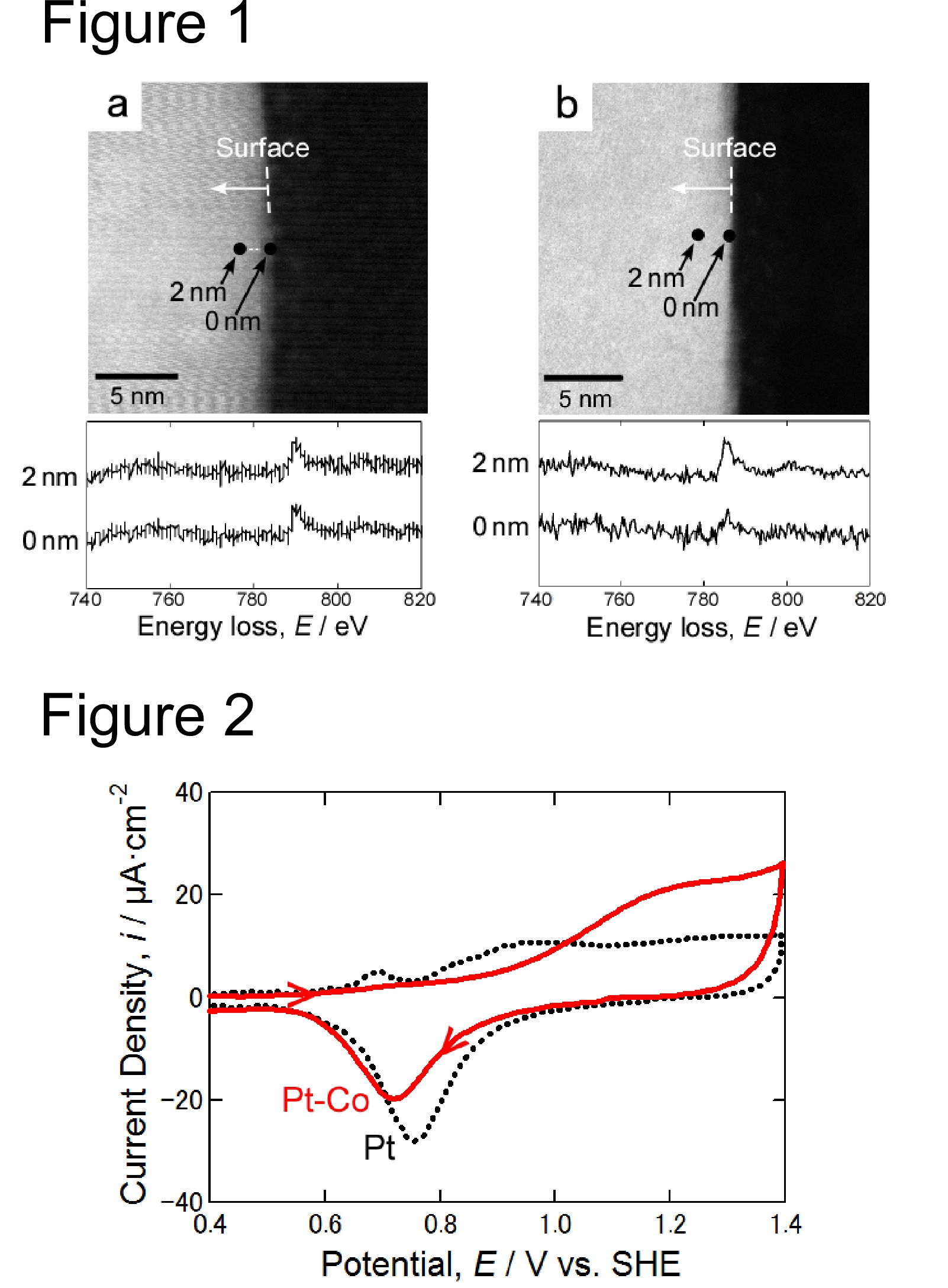