In order to demonstrate advantage of this method, we applied this to sulphonated poly (arylene ether sulphone) (SPES) and a composite of zirconium sulphophenylphosphonate (ZrSPP) and SPES using nano capping technique (Capping-ZrSPP-SPES), in which enhanced grottuss mechanism is expected by controlled configuration of proton functional groups. [1, 2] 2H and 17O labeled water was used in order to distinguish signals from non-exchangeable protons in SPES, and because natural abundance 17O (0.04%) NMR signals of water in membrane cannot be detected. Incubating the composites in 2H labeled water at 100% RH for three days resulted in the exchange of the protons of sulfonic acid and adsorbed water, and thus the 2H MAS NMR spectrum included only the signal of the mobile proton. Similarly, for 17O MAS NMR analysis, the composite was incubated in 17O labeled water at 100% RH for three days. After reaching equilibrium, air tight sample tubes were sealed to avoid change of the water content during NMR measurements.

2H and 17O MAS NMR measurements were carried out on Agilent NMR systems 400WB at 9.4 T. A 4 mm diameter air tight rotor was used for sample spin at 12 kHz. 2H and 17O 1D-NMR spectra were obtained by using a single pulse sequence. Sample temperature was calibrated by measuring the 79Br signal of KBr powder under the same measurement condisions as described elsewhere. [3] 1H PFG NMR measurements were carried out on JNM LA-400 at 9.4 T. NMR spectrometer equipped with maximum gradient strength of 12 T/m. The diffusion coefficient (D) was measured by using a pulsed-field-gradient stimulated-echo pulse sequence. [4, 5]

On the other hand, the temperature variation of 2H NMR signal from Capping-ZrSPP-SPES showed different behaviors.  As shown in Fig. 2 (b), 2H resonance peak is still sharp in the water-freezing temperature, suggesting that the protons in the Capping-ZrSPP–SPES retained their mobility even at -39 °C. These results indicate that protons in the Capping-ZrSPP–SPES move independently like a grotthuss mechamisum in freezing temperature region. More detailed and 1H PFG NMR results will be presented at the Meeting. 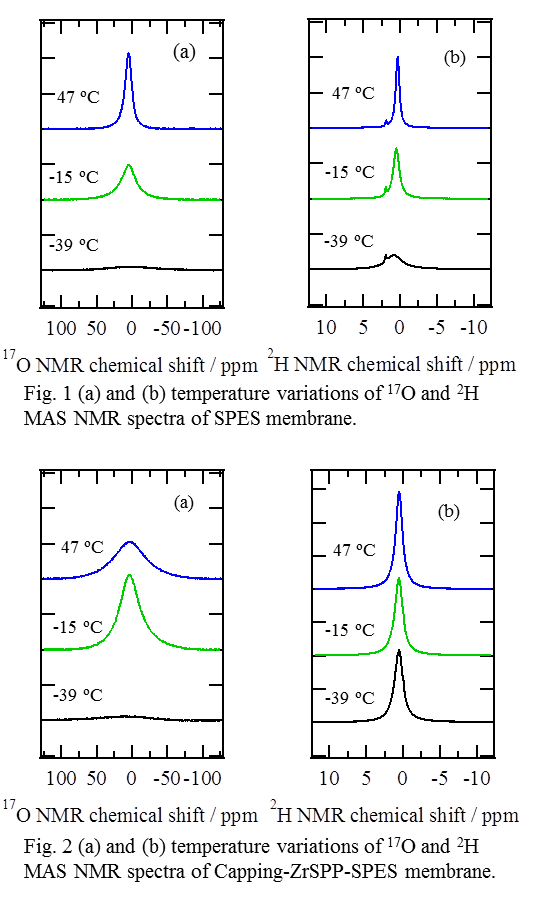