Considering the size of a battery pack in a full electric vehicle, the importance of a safe and reliable state of health assessment of the single cell is obvious. With increasing number of commercialised metal oxide and metal phosphate based cathode materials, new ways to monitor the cell’s state of health have to be developed to allow a save operation at all times. Especially non-uniform aging, caused by state of charge (SOC) and temperature gradients are a crucial risk for the cell’s reliability1–5. One approach under consideration uses the thermodynamic properties of Li-Ion cells. It has been shown to be a suitable, nondestructive tool to access further properties of the cell, allowing a closer look into the electrochemical processes in the different electrodes6–9. Measurements of open circuit voltage at different temperatures allow the calculation of the differential charge/discharge entropy according to equation (1)

where  is the open circuit voltage of cell at equilibrium state and  the Faraday constant. The variation of  as a function of the Li content x in the electrode yields to characteristic “change of entropy” profiles, indicating structural changes in the electrodes during charge and discharge. Furthermore, the full cell’s entropy profile  can be calculated as a sum of the entropy profiles of anode and cathode, given in equation (2)

As a result, irreversible structural changes within the electrodes as well as de-balancing between anode and cathode with ongoing aging are reflected in the full cell profile10,11.

Different types of commercial 18650 cells were stored at 60°C at 100% SOC to simulate accelerated calendar aging or were cycled at 25°C with a 1C rate respectively until the cell’s nominal capacity CN measured at 0.2C dropped down to 80% of its initial value. At this defined end of life, the cells were opened in a glove box under argon atmosphere. Different sections of the electrodes were used to rebuild coin cells for local entropy measurements as well as XRD measurements to investigate structural changes.

Figure 1 shows the changes in the entropy profiles of the two different aging treatments on the example of a high power cells with a NCA-based cathode as well as a graphite anode in comparison to the profile of a new cell. The capacity loss during the aging process causes a shrinking of the curve on the x-axis. Beside this expected effect, changes in the profile highlights become visible; the maximum at 900mAh vanishes while new a maximum appears at 450mAh for the heat treated cell and at 600mAh for the cycled cell, respectively. Changes in the entropy profile during ongoing aging need to be interpreted carefully as different effects influence the full cell profile.

In this work, local entropy measurements from different sections of the electrodes in combination with the respective XRD patterns are presented. Therefore, the effects of the different aging treatments on anode and cathode, the influence of irreversible structural changes in the cathode as well as the effect of electrode debalancing on the entropy profile are separated. To conclude the work, we will discuss in how far entropy profiles can be used beneficially as a supplement to existing methods for SOC and State-of-Health monitoring. 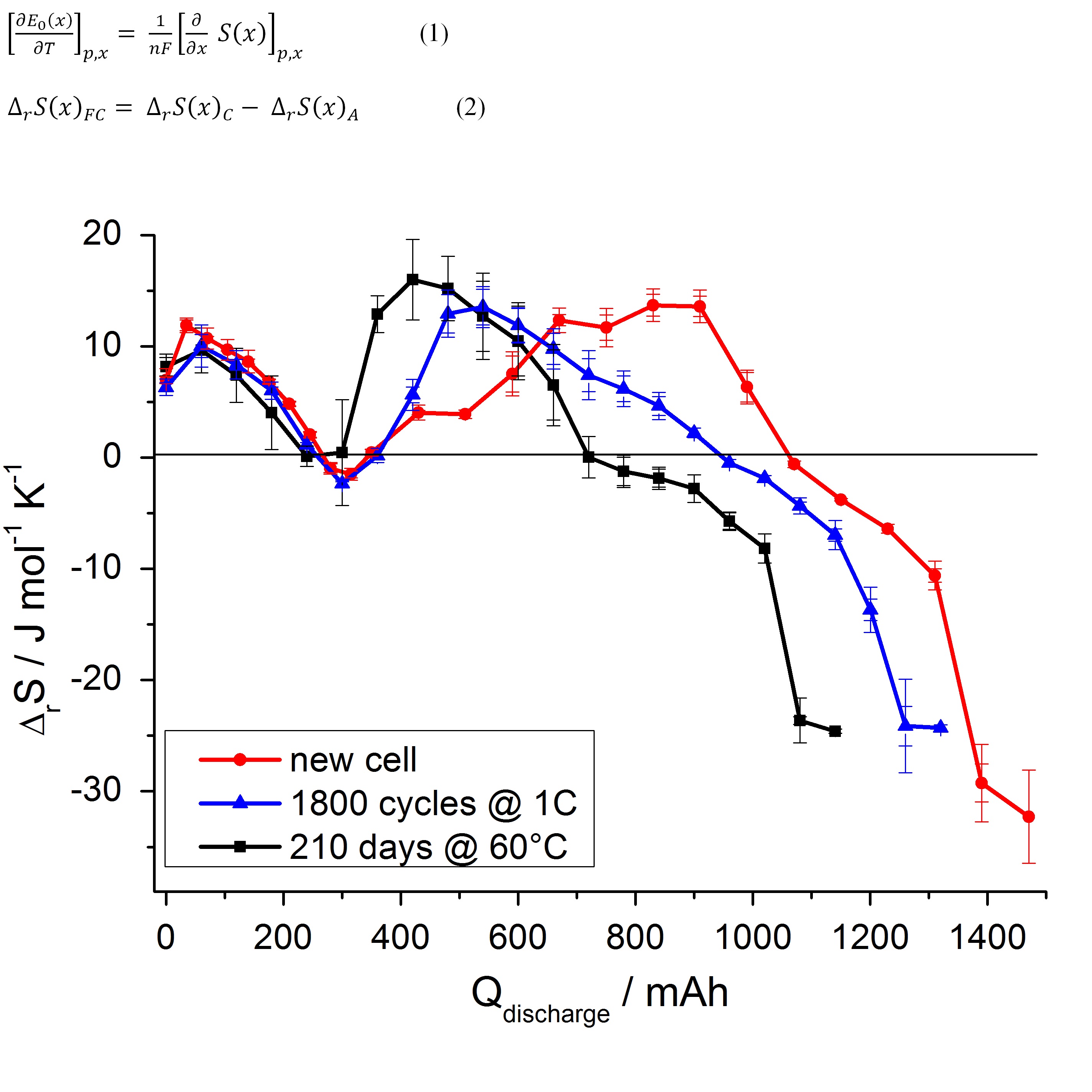