Sunrise, 2nd Floor, Galactic Ballroom 7 (Moon Palace Resort)
T. Park (Mechanical and Aerospace Engineering, Seoul National University), I. Chang (Graduate School of Convergence Science and Technology, Seoul National University), J. Lee (Mechanical Engineering, Korea Advanced Institute of Science and Technology), S. H. Ko, and S. W. Cha (Mechanical and Aerospace Engineering, Seoul National University)
The purpose of flexible and bendable fuel cell is to support future electronics, wearable electronics for example, which require more electrical energy than current portable electronics. As widely used lithium-ion battery technology is converging to its maximum ideal energy density, it is inevitable to find other solutions to cope with the increase of energy consumption of developing electronics. In addition, one of the most highlighted electronics in future is wearable electronic device. It has different characteristic that it requires flexibility and bendability. For this reason, flexible polymer electrolyte fuel cell (PEFC) was researched in our previous report [1]. Here, electrochemical performances of the cell were evaluated under bent position and decreasing tendency of the maximum power density was observed with increase of bending. However, the performances of flexible PEFC under various positions, torsion for example, should also be evaluated in order to investigate if it is possible to operate in fully bendable electronics such as wearable electronics.

This study shows the performance variation of flexible PEFC under torsion. Ag nanowires percolation network which can be stretched upto strain of 370% with less than 30 % increase of electrical resistance was adopted as material for current collector [2]. Polydimethylsiloxane (PDMS) was used to fabricate bendable fuel cell stack. Cross-sectional sizes of flow channels on flow-field plates for anode and cathode were 1 x 1 mm2 and 2 x 1 mm2, respectively. Degrees of torsion were 0, 5, 10, 15 and 20°. The results showed that maximum power density of flexible PEFC decreases as torsion increases. From the previous results [1], it is speculated that compressive stress perpendicular to membrane-electrode assembly (MEA) decreased with increase of torsion degree. In order to investigate causes of performance loss, electrochemical impedance spectra were measured. It showed that ohmic and faradaic resistances of the cell increased with increase of torsion. It corresponds with the previous results that ohmic and faradaic resistances increase when normal compressive stress to MEA decrease. However, it was found that decreased percentage of maximum performance of the cell was less than 35 %, meaning that flexible PEFC can be used for flexible electronic devices if overdesigned.

This work was supported by the Global Frontier R&D Program on Center for Multiscale Energy System funded by the National Research Foundation under the Ministry of Education, Science and Technology, Korea (2011-0031569). 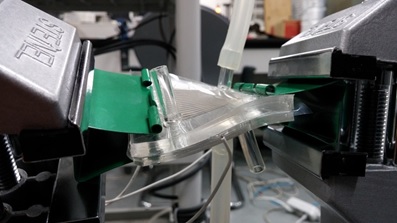