Expo Center, 2nd Floor, Delta Room (Moon Palace Resort)
S. W. Donne, R. C. Burns, and A. J. Gibson (University of Newcastle)
Manganese dioxide is a prominent material in the literature surrounding metal oxide based electrochemical supercapacitors due to its low toxicity and cost, combined with its good pseudocapacitive behaviour [1].  It is important to understand how the deposition of MnO2 proceeds on different substrates and in different solution conditions when attempting to design thin films of MnO2for use in electrochemical capacitors.

In this presentation, evidence will be presented that shows MnO2 deposition from solutions containing MnSO4­ proceeds by one mechanism on Pt, and another on MnO2.  The preferred mechanism of growth varies with acidity.  In relatively acidic solutions, 0.1 M H2SO4, an island growth regime is seen. In solutions of neutral pH, 0.1 M Na2SO4, behaviour corresponding to a very rapid spread of a thin coating is seen.  In both cases, the deposition on Pt proceeds by a solution based [Mn(OH2)6]3+ disproportionation mechanism, whereas the deposition on MnO2proceeds by a solid state reaction through the Mn(III) species, MnOOH.

Shown in the figure below is an example of the kinetic current curves obtained from the disc of the RRDE.  These curves show that as the potential is increased, the Pt surface is more rapidly covered by MnO2, with a smaller nucleation kinetic current seen, related to the smaller size of islands at coalescence.  It can be seen that these curves decay to the same current value, related to the kinetically (chemical, not electrochemical) limited transition from MnOOH to MnO2. 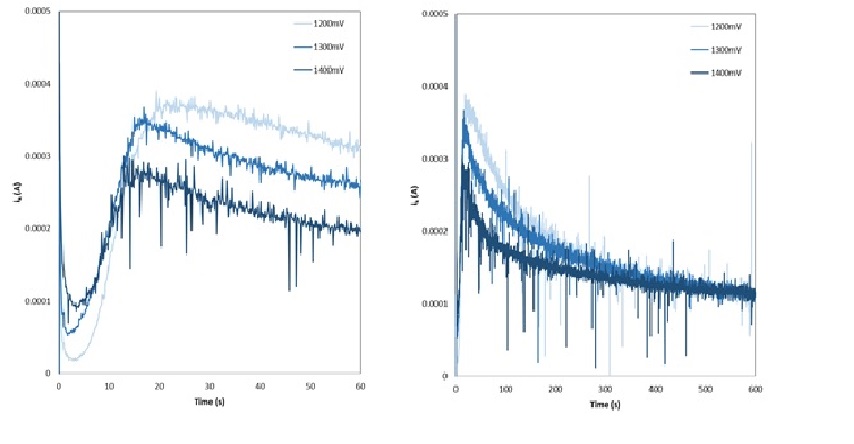