Expo Center, 1st Floor, Center and Right Foyers (Moon Palace Resort)
A. Otake, I. Muto, Y. Sugawara, and N. Hara (Department of Materials Science, Tohoku University)
Cast austenitic stainless steels generally consist of d and g phases and suffer from pitting under chloride environments. Pit initiation is thought to be caused by sensitization or segregation of P or Si at grain boundary. Many studies have been performed focusing on the relationship between sensitization and pitting. On the other hand, the effect of segregated elements at d/g boundaries on pitting corrosion resistance is still unclear, since it is hard to measure the electrochemical property of d / g boundaries. In this study, microelectrochemical measurements were carried out to elucidate the electrochemical property of d / g phase boundaries.

Table 1 shows the chemical composition of the steel used. To eliminate the effects of the formation of Cr-depleted zone and sulfide inclusions, the steel with low C and S contents was prepared by vacuum induction melting. Coupons were cut from a 20-kg ingot and used for all the experiments. No heat-treatment was performed in this study. A small number of spherical inclusions were observed in the steel. The inclusions were determined to be Al2O3-6SiO2by EDS analysis.  Figure 1 shows the optical microscope image of as-cast specimen after etching treatment in 10 % NaOH solution. The brown area is d phase, and white one is g phase.  Figure 2 shows the chemical composition of each phase analyzed by SEM/EDS. The chromium content  in the d phase was higher than that of g phase. Nickel was enriched  in the g phase.

Macroscopic potentiodynamic polarization was carried out in a natural aerated 0.1 M NaCl solution at 298 K. The current density increased rapidly at potentials higher than 0.5 V. Figure 3 shows laser microscope images of the specimen surface after the polarization measurements, showing the pit formation. In order to clarify the positional relationship of d / g boundary and the pit, etching in 10 % NaOH solution was performed after the polarization measurements. The surface of d phase was colored gray. From Figure 3, the selective dissolution or g phase was observed around the pit mouth; however, pit initiation site was unclear.

To clarify the pit initiation site, microscopic potentiodynamic polarization curves (electrode area: ca.200 mm × 250 mm) were taken. Figure 4a shows the polarization curve for the small area with d/g boundaries in 1 M NaCl at 298 K. No current spike was observed in the passive potential region. Figures 4b and c show the laser microscope images of the electrode surface before and after the microscopic polarization measurements.  No change was observed on the specimen surface.

Figure 5a shows the polarization curve for the small area with the inclusion in 1 M NaCl at 298 K. Also in this case, no current spike was observed in the passive region. By comparing of the surface images observed before and after the polarization, it was confirmed that no pit was initiated. Figures 5b and c show laser microscope images of the inclusion. As seen in this figure, the inclusion does not dissolve during the anodic polarization. In this study, no pit was initiated in the microelectrochemical measurements, whereas pit was generated in the macroscopic measurements. Further study is needed to ascertain the pit initiation site. 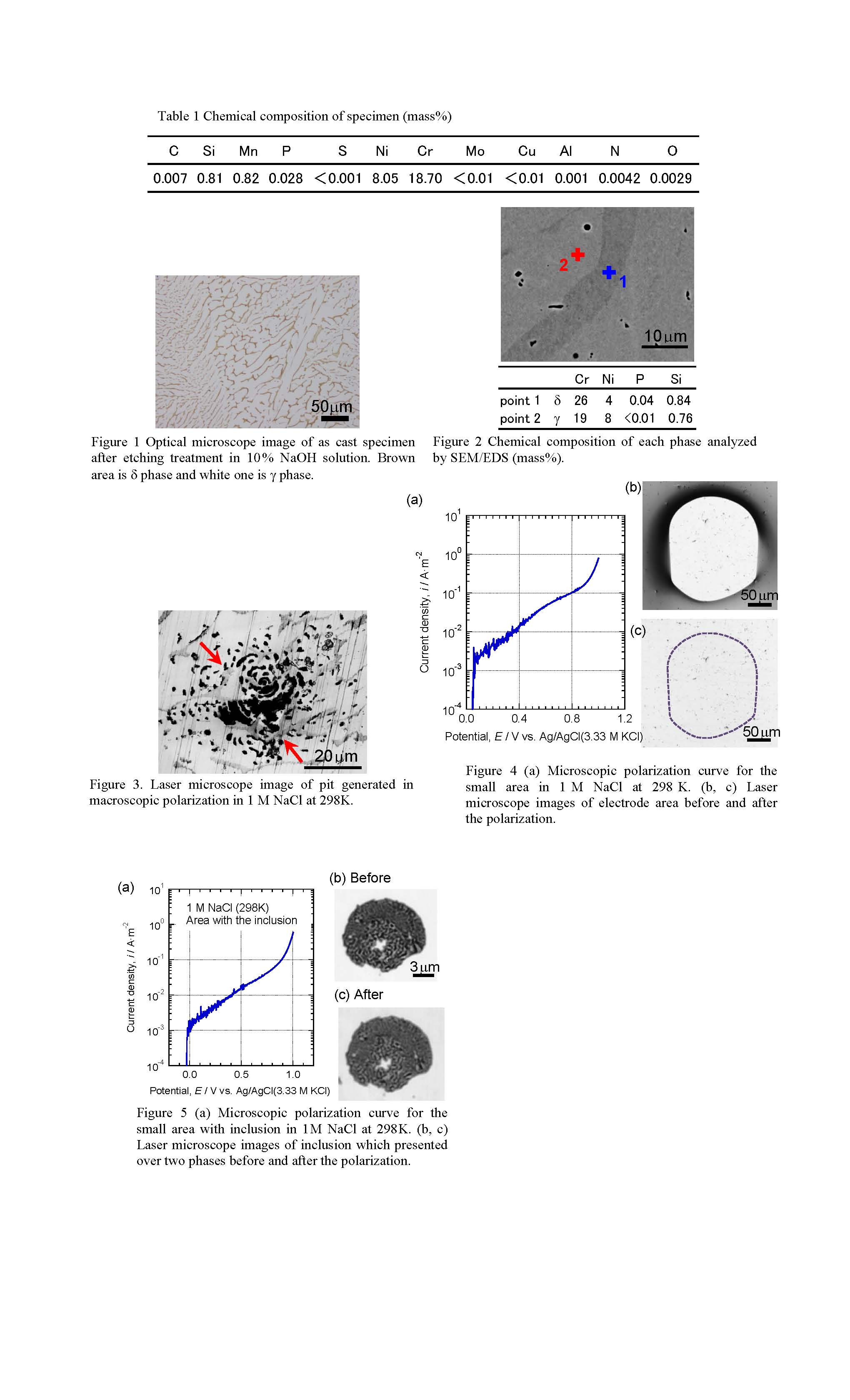