Lithium-oxygen battery is the most promising battery system owing to its high theoretical energy density.  The biggest challenges in the lithium-oxygen battery is the very high overpotential >1V, which limits the power density of the cell in the case of the non-aqueous electrolyte.  On the other hand, since aqueous lithium oxygen battery shows much lower overpotential even under high current density, we think the aqueous system should be suitable for high power applications such as EV or HEV.

Basically the reaction mechanism of the aqueous lithium-oxygen battery has been explained in the following four-electron transfer reaction.

It is known that the actual cathodic reduction process of the oxygen occurs by two two-electron steps described in the following equations in alkaline solution [1].

Since the kinetics of the second stage of the reaction is significantly dependent upon the catalytic activity of the electrode materials, a lot of studies for the oxygen reduction catalyst such as platinum, gold, palladium, rhodium and so forth, were carried out for fuel cell applications.  On the other hand, Yager et al. reported that the 2nd stage of the reaction does not occur on the carbon-based electrode because of its poor catalytic activity of carbon [2].  Furthermore they also reported that the 1ststage of the reaction based on the oxygen-peroxide couple is highly reversible on the carbon-based electrode.

In the present study we attempted to utilize the reversible electrochemical reaction of the oxygen-peroxide couple on the carbon-based electrode as the positive electrode reaction of the lithium-oxygen battery.

A gas diffusion electrode used in this study consists of two layers of carbon based electrode layer.  As a reaction layer of the electrode, Ketjen black and PTFE was mixed in the mortar and pestle and pressed into a uniform sheet.  The prepared sheet was punched and layered with a carbon paper used as a diffusion layer.

The lithium-oxygen cell was prepared in nitrogen atmosphere and operated in oxygen atmosphere to avoid the contamination of CO2, which forms non-active Li2CO3. 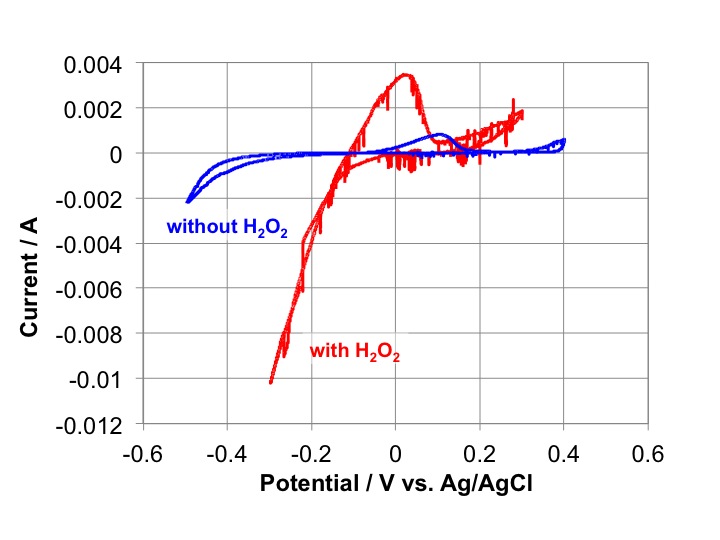