Expo Center, 1st Floor, Universal 3 (Moon Palace Resort)
O. Tkacheva, A. Kataev, A. Redkin, A. Rudenko, A. Dedyukhin, and Y. Zaikov (Institute of High Temperature Electrochemistry)
Recent developments in the field of low-temperature aluminum electrolysis utilizing oxygen-evolving inert anodes prove the efficiency of potassium cryolite-based electrolytes. Such electrolytes give an opportunity to perform electrolysis at temperature below 800 °C. The potassium cryolite-based electrolytes can be used as prospective media for other electrochemical and chemical technological processes including aluminum alloys production. However, the introduction to the electrolytic bath the metal-containing additives along with alumina can result in electrolysis violation. It is a consequence of significant change in electrolyte properties with varied composition. In present work the KBF4impact on the physical-chemical properties of the potassium cryolite-based melts was studied.

Liquidus temperature, electrical conductivity, density, alumina solubility in the KF-AlF3 and KF-NaF(15.9 mol%)-AlF3 molten mixtures containing KBF4 were determined. Cryolite ratio (CR), the ratio between molar concentrations of the alkali metal fluoride and aluminum fluoride (CR=NMF/NAlF3), was varied from 1.3 to 1.5. It should be mentioned that the cryolite ratio for the mixed KF-NaF-AlF3 cryolite melts was calculated as CR=(NKF+NNaF)/NAlF3. Elemental composition of the molten mixtures being studied was controlled by ICP analysis and X-ray fluorescence spectroscopy on XRF-1800 (Shimadzu).

The alumina additions to the potassium cryolite-based melts decrease the liquidus temperature as it is shown in Fig.1. The quasi-binary “cryolite mixture”– alumina phase diagrams are simple eutectics. The KBF4 presence in the KF-NaF-AlF3-Al2O3 electrolytes shifts the eutectic point to the right and increases the alumina solubility in these melts. The eutectic points were found equal to 759 and 761°C at the Al2O3 content 4 and 5 mol%, respectively,  in the [KF-NaF(15.9mol%)-AlF3+KBF4 (3mol%)]-Al2O3 and [KF-NaF(15.9 mol%)-AlF3+KBF4(5 mol%)]-Al2O3 mixtures with CR=1.3. The Al2O3addition of 6 mol% to the both electrolytes results in significant rise of the liquidus. The bend point on the cooling curves corresponding to the temperature of primary crystallization was not detected because the beginning temperature of the cooling process in these tests was below the liquidus. The presence of not dissolved deposit at the bottom of crucible at 850 °C was also confirmed by visual observation.

The density of cryolite melts was measured using the Archimedean method. A platinum sphere suspended with platinum wire and attached to an electronic balance unit (Mettler AT20) was immersed into the electrolyte located in the glassy carbon crucible. The measurements were performed in the temperature range 700-800 °C. The temperature dependence of the Pt sphere volume was considered and determined in the calibration test with FLiNaK (eutectic).  The density of the KF-AlF3-KBF4 melts decreases with increasing the KBF4 content. So, the addition of the KBF4 3 mol% reduces the density of the molten mixture on about 5%. 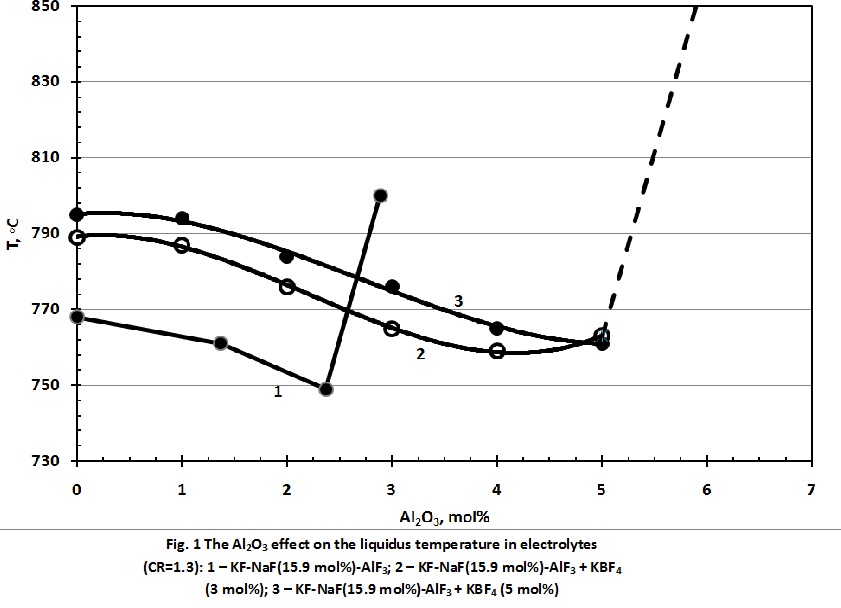