Expo Center, 1st Floor, Center and Right Foyers (Moon Palace Resort)
W. Lee, T. Kim, S. Muhammad (Department of Energy Science, Sungkyunkwan University), T. Yim, J. S. Yu (Advanced Batteries Research Center, Korea Electronics Technology Institute), and W. S. Yoon (Department of Energy Science, Sungkyunkwan University)
A recent attention in lithium ion battery research is focused on increasing its energy density and structural stability. As a result, the layered Li[NixCoyMnz]O2 (x+y+z=1) electrode materials have attracted a great deal of attention as an alternative of LiCoO2, due to its remarkable electrochemical properties. This three-component system shows high capacity of LiNiO2, layered character of LiCoO2, low cost and thermal stability of manganese in LiMnO2.[1,2] Recently, a lot of research is being carried out to improve the energy density by increasing the Ni content. However, there is always a trade-off between the benefits of large amount of Ni atoms and the risk of side effects, such as poor thermal stability and lower cyclability.

In this study, the structural and electrochemical properties of Co fixed LiNi0.5+xCo0.2Mn0.3-xO2 (x=0, 0.1, 0.2) cathode material were investigated by using synchrotron based X-ray diffraction and absorption techniques to understand the effects of Ni and Mn components. The Rietveld refinement of diffraction data was performed by using R-3m model. Refinement results show that lattice parameters of LiNi0.5Co0.2Mn0.3O2 (x=0) are a=2.8697Å, c=14.2378Å, and by increasing the nickel content in LiNi0.5+xCo0.2Mn0.3-xO2 (x=0, 0.1, 0.2) lattice parameters “a” and “c” shrink as shown in Table 1. Generally, it is believed that the Ni2+ content in the Li layer increase when the total amount of Ni component increase in the three component system. However, in the Co fixed LiNi0.5+xCo0.2Mn0.3-xO2 cathode material system, interestingly cation mixing decreases by increasing the nickel content.  The NCM721 (x=0.2) electrode has lower Ni2+ ions in the lithium layer compared to NCM622 (x=0.1) which has even lower quantity of Ni2+ ions than that of NCM523 (x=0). In pristine electrode material, the theoretical value of average Ni oxidation state is Ni2.4+, Ni2.67+, Ni2.86+ for x=0, 0.1, 0.2 respectively and this trend is confirmed by Ni K-edge XANES spectra.

The Ni K-edge XANES spectra show shift in energy position with change of nickel content in the electrode material. In NCM523, Ni K-edge position is close to that of Ni2+, while that of NCM721 is at higher energy position, indicating higher Ni valence (close to Ni3+) as shown in Figure 1. The increase of average Ni oxidation state in NCM721 pristine material suggests that Ni3+ component is predominant in its transition metal layer. Therefore, shrinking of lattice parameters by increasing the the nickel quantity can be explained on the basis of Ni3+ content in the transition metal layer. In the Co fixed system (rCo3+=0.545Å),  the unit cell dimensions in a hexagonal setting shrink by increasing the Ni content because of the difference in size between divalent and trivalent nickel ions (rNi2+=0.69Å and rNi3+=0.56Å). When the Ni3+ increases, the Ni2+ and the Mn4+ (rMn4+ =0.53Å) content decrease, net result is decrease in lattice parameters because the increment is small (rNi3+-rMn4+=0.03Å) compare to the decrement (rNi3+-rNi2+=-0.13Å). For the Ni2+ content in Li layer, we can also say that there is low opportunity for Ni2+ to go into the Li layer because the total amount of Ni2+ content decreases with increase of the Ni content. Consequently, these effects of nickel content in the layered structure would affect electrochemical properties such as capacity, cyclability and rate capability; hence their study can assist in designing safe and high performing electrode materials.

The more detailed structural and electrochemical properties of Co fixed LiNi0.5+xCo0.2Mn0.3-xO2 cathode material will be presented at the time of meeting. 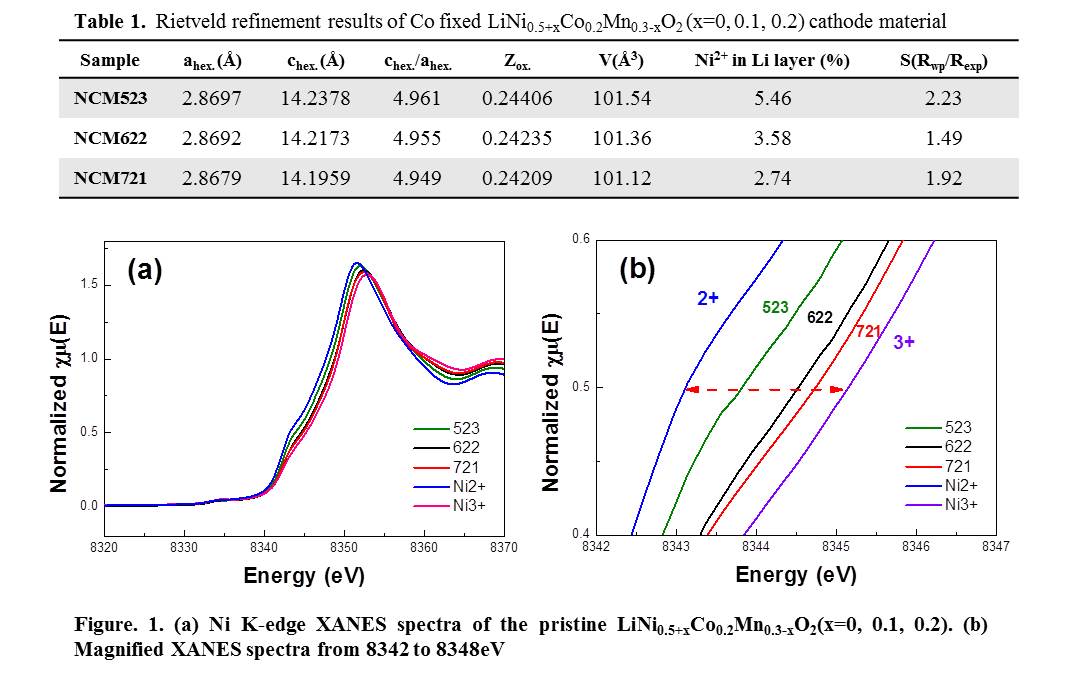