This paper will present the use of Electrochemical Impedance Spectroscopy to understand the behavior of thin film batteries built by stacking several active layers thanks to physical vapor deposition technics (with LiCoO2 as positive electrode, lithium phosphorus oxynitride vitreous glass as electrolyte (LiPON) and lithium metal as negative electrode). The first step of this study was to distinguish the impedance response between each individual active layer and interface by testing different systems. Metal-insulator-metal stack let us access to the ionic transport properties in LiPON [1]. Half-cells composed with electrolyte and LiCoO2 or lithium, give us information about the electrolyte/active material interfacial behavior. At last, the insertion electrode bulk electronic conductivity can be obtained with a Pt/LiCoO2/Pt symmetrical cell. Thanks to all these results it is thus possible to determine an electrical equivalent model for the complete battery. The model is composed of serial contact and collector resistivity (A), bulk electrolyte (B), capacitance and resistance interfaces (C, D), semi-infinite diffusion in LiCoO2 (E) and charges accumulation phenomena (F).

The Second step was to explain the reasons for spectrum evolutions in function of state of charge, aging or other external conditions. EIS was systematically performed after battery manufacturing and after aging, from 1 MHz to 50 mHz and between 3V and 4.2V. The most obvious observation is the evolution of the “D” contribution with cell potential. Iriyama et al. already attributed it to the charge transfer process at the LiCoO2/LiPON interface [2]. But after aging a new potential dependent R//C contribution appears and could correspond to bulk phenomena in the insertion electrode created by crystalline evolution during aging.

To conclude, thanks to electrochemical impedance spectroscopy, we will propose an electrical equivalent model of the operating microbattery to predict its evolution, failure and aging. 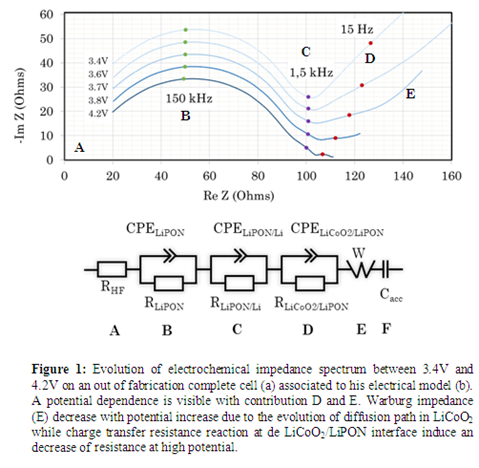