Recently, metal phosphides have received much attention as anode material for lithium ion batteries due to high reversible capacity at relatively low potential.[1] However, most MPx suffers from a relatively large irreversible capacity due to the decomposition of LixM, LixP, and metal during cycling. In order to improve the electrochemical properties, ternary M-M’-P system have been suggested and some of them prove to be effective in improving the cycle performance. [2] Cho et. al. reported the electrochemical properties and reaction mechanism of nanoparticle cluster MoP2 anode. [3] It showed high reversible capacity and good cycle performance at limited voltage range. However, upon increasing voltage, the capacity decreases rapidly, suggesting that MoP2 decomposed to Mo and LiPnphase.  Here, we developed a novel Si-substituted MoP2 (Mo0.8Si0.2P2) alloy to increase the reversible capacity and enhance the cycle performance. We investigated the differences in physical and electrochemical properties between MoP2 and Mo0.8Si0.2P2 anode, examined using powder X-ray diffraction, SEM, and TEM, and galvanostatic charge-discharge test. We also investigated the volume expansion of MoP2 and Mo0.8Si0.2P2 alloys during cycling, considering the influence of substitution of Si into MoP layers in MoP2alloy.

Orthorhombic Molybdenum Phosphide (MoP2) and Si-substituted Molybdenum Phosphide (Mo0.8Si0.2P2) were synthesized by mechanical-ball milling method. The physical properties were examined by powder XRD, SEM, HR-TEM and EDX. The electrochemical characterizations were performed using a CR2032 coin-type cell. The electrodes were prepared by mixing 75 wt% active material, 10 wt% Super P conducting agent, and 15 wt% PAA binder dissolved in NMP. The cells were made of a lithium metal anode separated by polypropylene film. The electrolyte was a mixture of 1M LiPF6-ethylene carbonate (EC)/diethylene carbonate (DEC)/dimethyl carbonate (DMC) (3:5:2 by vol) with 10 wt% fluroethylene carbonate (FEC). The charge and discharge rate was both 0.1C (0.3 mA/cm2) with a cut-off voltage of 5 ~ 1200 mV.

Fig. 1 shows the typical XRD results of MoP2 and Mo0.8Si0.2P2 alloy powders prepared by mechanical milling method. All peaks of MoP2 and Mo0.8Si0.2P2 could be indexed as the Orthorhombic MoP2 phase of Cmc21 (JCPDS#00-016-0499). The lattice constants of Mo0.8Si0.2P2 show smaller than those of pristine MoP2 because of substitution of smaller Si ion. The broad peak at 2θ = 22oindicated the residue amorphous red P.  Fig. 2 shows the cycle performance of the Li/MoP2 and Li/Mo0.8Si0.2P2 half cells at 0.1C rate with voltage region from 1200 to 5 mV. The Mo0P2 anode showed a specific capacity of 655 mAhg-1 in the first charge process and showed a capacity retential rate of 88 % after 100 cycles. Conversely, the Mo0.8Si0.2P2exhibited much higher initial capacity of 783 mAhg-1better cyclic retention rate of 93.2 % after 100 cycles.

This study was supported by a National Research Foundation of Korea Grant funded by the Korean Government (MEST) (NRF-2011-C1AAA001-0030538). 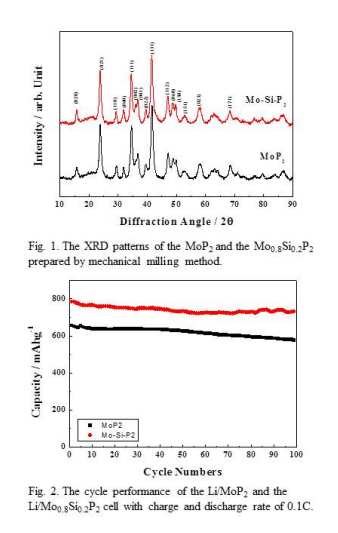