In the electrooxidation reaction of hydrazine, the most desirable reaction is the four-electron reaction given by equation (1). Co exhibits a higher rate of chemical reaction (decomposition) than that of Ni. The reaction selectivity of anode catalyst of DHFC affects to the enlargement of the fuel cell system, because generated ammonia is required to decompose harmless gas to discharge to the environment.

Fig. 1 shows the schematic view of the operand XAFS measurement system. In this study a half-cell was used. Working electrodes were prepared by the same method for MEA fabrication. Ni, Co, Ni0.87Zn0.13 catalysts were coated on carbon paper (CP, GDL 10AA, SGL Technologies GmbH). Hg/HgO (XR440, Radiometer) and Pt coil were used as reference and counter electrode, respectively. Fig. 2 shows X-ray absorption near edge structure (XANES) spectra for Ni-K and Co-K edge in prepared catalysts coated on CP in alkaline 1M KOH + 0.1M hydrazine hydrate (HH), together with reference materials. Metallic structure of Ni0.87Zn0.13/C compared with Ni/C was supposed due to electron donor from Zn to Ni, and this atomic structure of Ni0.87Zn0.13/C was stable during electrochemical reaction in alkaline solution. In 1M KOH + 0.1M HH, Co-K edge of Co/C was closely with Co-foil except for potential of 0.402 V due to reduction by hydrazine hydrate against oxidized Co. From the operand XAFS results, high catalytic activity of Ni0.87Zn0.13/C compared with Ni/C was caused that Zn has a larger ionization tendency than Ni so that Ni in Ni0.87Zn0.13/C hardly gets rusty due to the sacrifice anticorrosive action. Ammonia was generated in DHFC by the surface of metallic Co reduced by hydrazine. 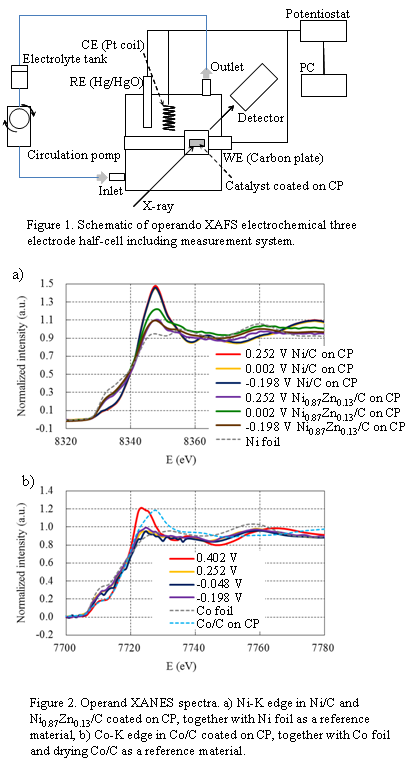