In recent decades, lithium transition-metal phosphates such as LiMPO4 (M=Fe, Co and Mn) and Li3M2(PO4)3 (M=V, Fe and Ti) have been extensively studied as cathode materials for lithium ion batteries, due to high theoretical capacity, reversibility and better thermal stability than lithium transition metal oxides such as LiCoO2. 1-2

Monoclinic lithium vanadium phosphate, Li3V2(PO4)3, having structure similar to the open framework NASICON with corner shared VO6 octahedra and PO4 tetrahedra contains three independent lithium sites. The poly-anion instead of the O2− ions helps to stabilize the structure and allows a faster ion migration. The reversible cycling of all three lithium ions from Li3V2(PO4)3 would correspond to a theoretical capacity of 197 mAh/g in the voltage range of 3.0-4.8V, which is the highest reported of the phosphates. However, Li3V2(PO4)3 has poor conductivity, which restricts its practical application for lithium ion batteries. Much research has been devoted to increasing its conductivity by controlling particle size, carbon coating and metal doping in the V sites. 3-4

In this study, we tried to improve the electrochemical performance of the Li3V2(PO4)3cathode materials which have poor electronic conductivity by the wet ball-milling method and using PANI as conducting network. 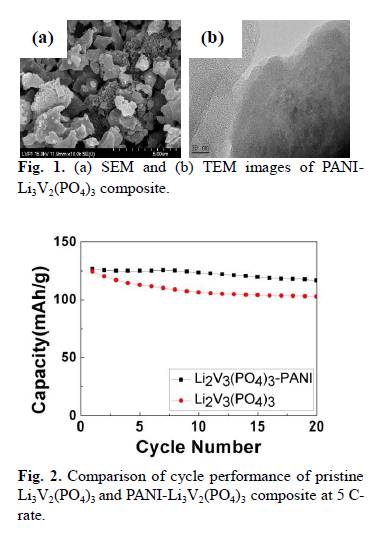