Sunrise, 2nd Floor, Jupiter 1 & 2 (Moon Palace Resort)
K. Nishida, T. Muranishi, Y. Ishizaki (Kyoto Institute of Technology), S. Tsushima, and S. Hirai (Tokyo Institute of Technology)
During operation of polymer electrolyte fuel cells (PEFCs), excessive liquid water clogs cathode channel and causes oxygen transport limitation.  This phenomenon known as “water plugging” is recognized as a critical barrier to high performance operation.  To alleviate this problem, it is necessary to deeply understand liquid water transport within cathode channel and design the optimum channel structure.  It is also effective to control the surface wettability of cathode channel for promoting water removal.  In the previous works, many experimental efforts to visualize liquid water behavior in PEFCs have been conducted by neutron radiography and optical technique using transparent cells.  However, most of the conventional visualization studies investigated only the water transport in the in-plane direction.  The through-plane behaviors of liquid droplets inside a cathode channel, including the emergence, growth and combination of droplets on the GDL surface and the attachment to the channel sidewall were not grasped in detail.

To directly observe the detailed behaviors of water droplets in cathode channel, "cross-sectional visualization cell" was recently developed by several researchers.  This visualization technique is very useful to evaluate the growth and attachment behaviors of liquid droplets and the blow-off of water plugs in a gas channel.  However, in the past experiments using cross-sectional cell, liquid water was injected into a simplified channel model simulating actual PEFCs by syringe pump, and ex-situ observation of liquid water behavior was only carried out under non-operating condition.  The cross-sectional imaging in an operating PEFC was not attempted, and the correlation between water transport in cathode channel and cell performance was not yet discussed.

In this study, we fabricate a cross-sectional visualization cell, which enables the internal observation of each gas channel, and attempt to visualize the dynamic behaviors of liquid droplets in the cathode channel of PEFC under operating conditions.  In the experiment, the attachment behavior of liquid droplets to the channel sidewall and the removal of water plugs in the cathode channel are investigated, and the effect of wettability of channel wall on the liquid water transport is also evaluated.  Furthermore, the cell voltage and differential pressure are simultaneously measured, and the correlation between the water removal and the cell performance is discussed.

Fig. 1 presents the schematic diagram of the cross-sectional visualization cell developed in this study.  The membrane electrode assembly (MEA) is sandwiched between two stainless steel current collectors (11 mm X 38 mm) with a two-pass serpentine flow channel.  The wide, depth, and length of flow channel are 1.0 mm, 1.0 mm, and 88.5 mm, respectively.  Two separators placed outside the current collectors are held together by four bolts.  To observe the water droplet behavior inside the cathode channel, quartz windows were attached to the sidewalls of each current collector.  In addition, to evaluate the effect of channel surface wettability, the cathode flow channel was treated with hydrophilic coating.  The contact angles of uncoated and hydrophilized channels are 73 and 18o, respectively. 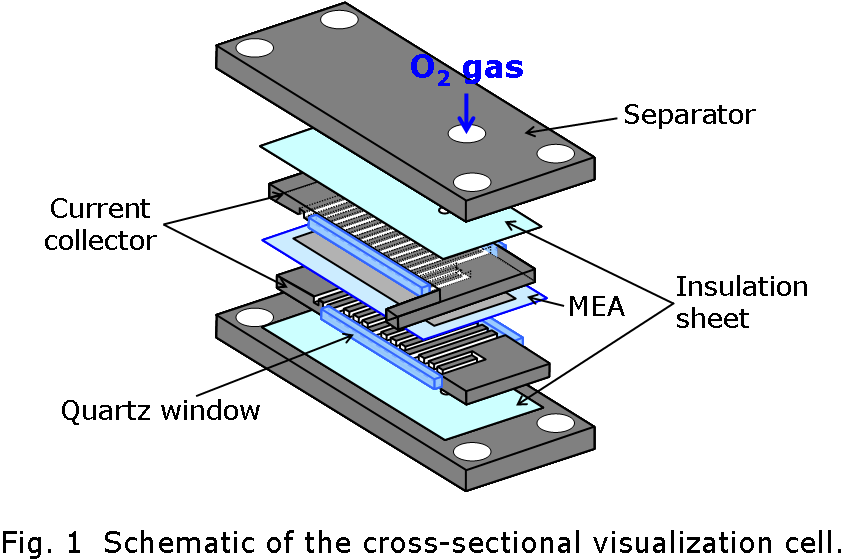