Sunrise, 2nd Floor, Jupiter 3 & 5 (Moon Palace Resort)
A. S. Gago, A. S. Ansar, P. Gazdzicki, N. Wagner, J. Arnold, and K. A. Friedrich (German Aerospace Center)
Hydrogen can be used as an energy carrier when produced from renewable energies such as solar or wind by using proton exchange membrane water electrolysis (PEMWE) systems. Key components of PEMWE that determine largely the stack cost are the bipolar plates (BPP) [1, 2]. The high cost of the BBPs is due to the following:

A more suitable material for bipolar plates would be stainless steel, which is cheaper and easier to machine than titanium. However, it corrodes dramatically when used in PEMWE. Moreover, the ions released from the corrosion process poison the catalysts coated membrane (CCM) of the electrolyzer. Consequently, stainless steel has to be protected with a coating that is corrosion resistant in acid environment and conductive at the same time.

In this sense, a titanium coating for stainless steel BPP of PEMWE has been developed by vacuum plasma spraying (VPS) [6]. Subsequently, the coating was physically and electrochemically characterized. The minimum thickness achieved was 13.5 µm.  After surface modification the coating has an interfacial contact resistance (ICR) of less than 10 mΩ cm2 at 140 N cm-2, see Figure 1a, which meets the DOE 2015 target for BPP of PEM fuel cells. Corrosion measurements were performed in simulated environment of PEMWE. Figure 1b presents the potentiodynamic polarization curves of the uncoated and coated stainless steel substrate (ss) with titanium (Ti/ss). The electrochemical characteristic of Ti/ss was measured after a constant polarisation at 2 V vs. RHE for 24 h. Neither corrosion of the ss substrate, nor oxygen evolution on the sample was observed. Furthermore, the current transients were highly dependent on the surface finishing of the coating, although the protection offered to the substrate remained. XPS measurements showed that the oxidation of the coating occurs as a result of the anodization process in acid medium and not during thermal spray deposition. Given the superior characteristics of the coating, it might have a large impact on the cost of PEMWE systems for large scale electricity storage from renewables. 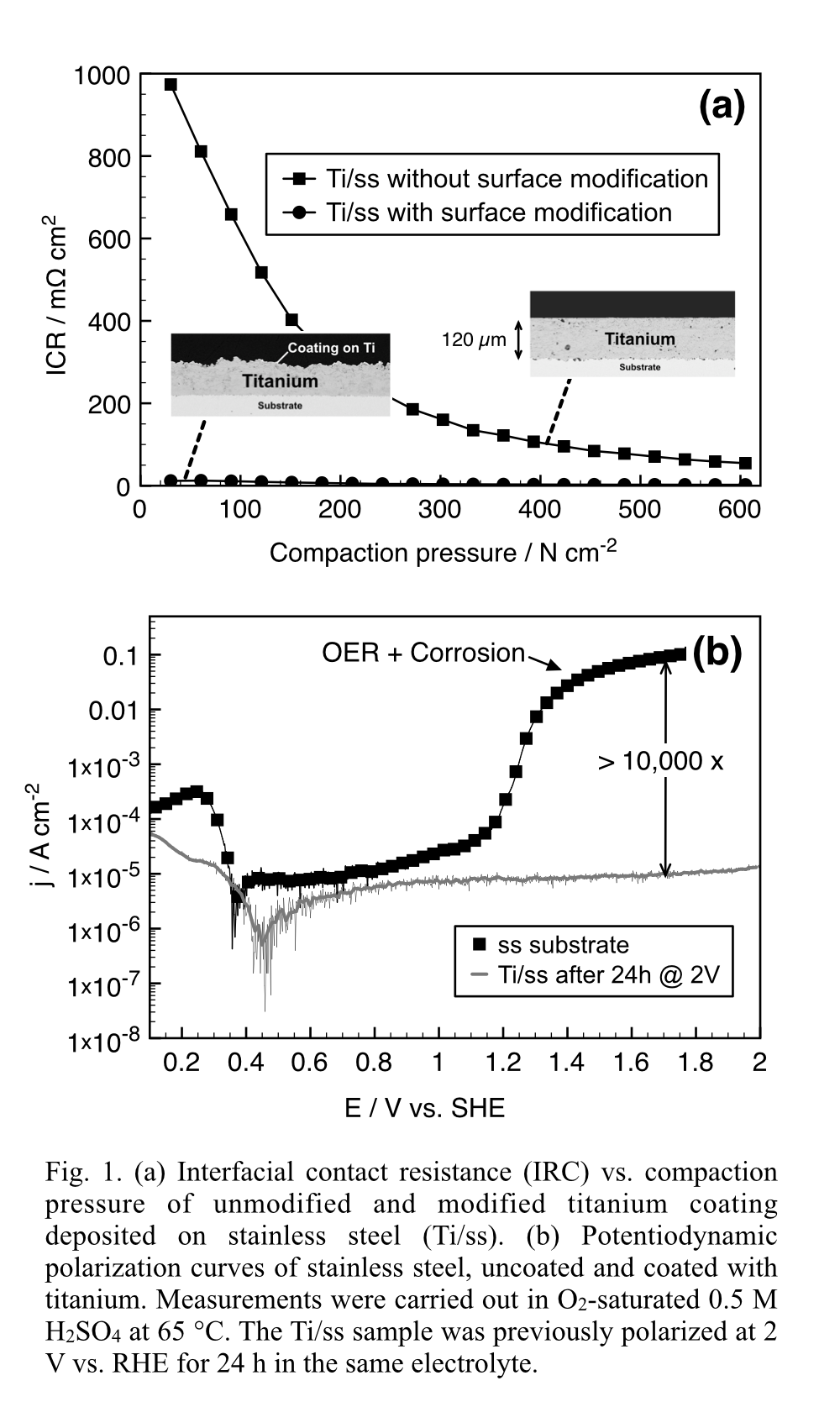