The average structure of these compounds is well-known but the complexity of the local structure needs further understanding. In fact, the local environments govern activation barriers and can affect notably Li ion transport. At the nanoscale, Li1+xM1-xO2 can be described as LiMO2-Li2MnO3nanocomposites with a complex microstructure which depends on the nominal composition. In addition, structural changes and redox processes occurring during cycling depend not only on the initial local structure but also on the cycling conditions (rate and temperature). Thus, a better understanding of the relationship between local structure and electrochemical properties is needed for improving performances of these materials.

In this work two electrodes with different starting microstructures and activated up to 4.6 V at two different temperatures were studied. The electrochemical phenomena observed for each compound during galvanostatic cycling were found to be quite different, especially in discharge.

Li2MnO3-type order, probably responsible for extra-capacity in these materials, is detected in both starting compounds; however its evolution is found to be highly dependent on the cycling conditions. During charge, there is a progressive attenuation of the Li2MnO3-type order at high potential, even disappearing at the end of the first charge under severe activation conditions. Many stacking faults were observed by HRTEM, especially after activation at high temperature. In addition, spinel-type defects are visible at the edges of crystals (see figure) and are probably the cause of the voltage decrease observed during cycling. Indeed, redox reactions associated with lithium ion insertion into “special” sites, like spinel defects, may require to overcome a larger energy barrier. The analysis of the surface composition by XPS shows a surface enrichment in manganese which is in good agreement with the formation of spinel-type defects (LiMn2O4 vs. LiMO2). Furthermore, we also monitored the effect of temperature and microstructure on the redox mechanisms involved during cycling, in ex-situ and operando mode. The evolutions of Mn-K, Co-K and Ni-K edges were studied by XAS. While the activation temperature has an influence on the Co-K and Ni-K edges, the influence of the microstructure is only noticeable on the Mn K-edge. Finally, in order to get information on redox processes at the nanoscale, O-K and Mn-L2,3 edges were studied by EELS at different states of charge. Modifications of the fine structures of these two edges were observed during the entire activation cycle and quantitative information was deduced from L3/L2ratios analyze.

All these results will be discussed in detail. 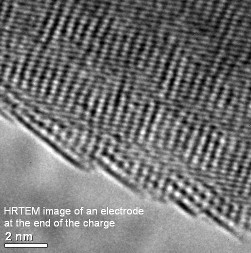