Semiconductor-sensitized solar cells (SSSCs) have greater stability of the semiconductor compared to organic dyes. Antimony sulfide (Sb2S3) is considered as a remarkable absorber for SSSCs due to its high absorption coefficient[1], low toxicity, abundance of its elements, and direct band gap with absorption in the visible range (approximately 1.8eV[2]). Sb2S3-based extremely thin absorber (ETA) solar cells reportedly have a 3.7% efficiency when the structure is porous TiO2 as n-type semiconductor and CuSCN as p-type semiconductor[3]. Photo-generated carriers are produced in Sb2S3 films, and a fast charge separation occurs due to the “thinness” of the absorber. However, the relation between the microstructure of absorber Sb2S3and the power generation characteristics of this type of ETA solar cells remains unclear.

A thin TiO2 film was deposited on transparent conductive oxide (TCO) glass by spray pyrolysis. Sb2S3 was then deposited on this film by CBD from a solution of SbCl3 and Na2S2O3 (Aldrich). Alternatively, Sb2S3 film was deposited by sputtering using a Sb2S3 target of 99.9% purity (Kojundo Chemical) in an argon atmosphere with a base pressure of 5×10−4 Pa and with a launch power of 50 W. Both of  these amorphous Sb2S3 films deposited by CBD and sputtering were then annealed in nitrogen at 320°C for 20 min to yield dark-brown crystalline stibnite. CuSCN was deposited by wiping or by inkjet-printing in an ambient atmosphere using a slightly under-saturated solution of CuSCN in dipropyl sulfide heated to 80°C. ETA solar cells were completed by depositing a gold film as the electrode by vacuum evaporation.

Figure 1 shows the dependence of Jsc of ETA solar cells upon absorbance of sputter-deposited Sb2S3 at 500 nm. Absorbance depends on the thickness of Sb2S3. By controlling the deposition time of Sb2S3, the film thickness can easily be controlled by sputtering. Sb2S3 absorbance around 0.6 yielded the highest Jsc. With thinner films, the number of absorbed photons is not sufficient to yield a high amount of photo-generated carriers, whereas thicker films increase the amount of recombination of photo-generated carriers. Cell efficiency of ETA solar cells with sputter-deposited Sb2S3 is clearly improved compared with CBD-deposited Sb2S3(Table 1).

In summary, with the new deposition methods introduced in this study, namely sputtering and inkjet-printing, absorber Sb2S3 and p-type semiconductor CuSCN were deposited successfully. By controlling the microstructure of Sb2S3, ETA solar cell efficiency was improved. The inkjet-printing conditions still need optimization to yield a higher cell efficiency. 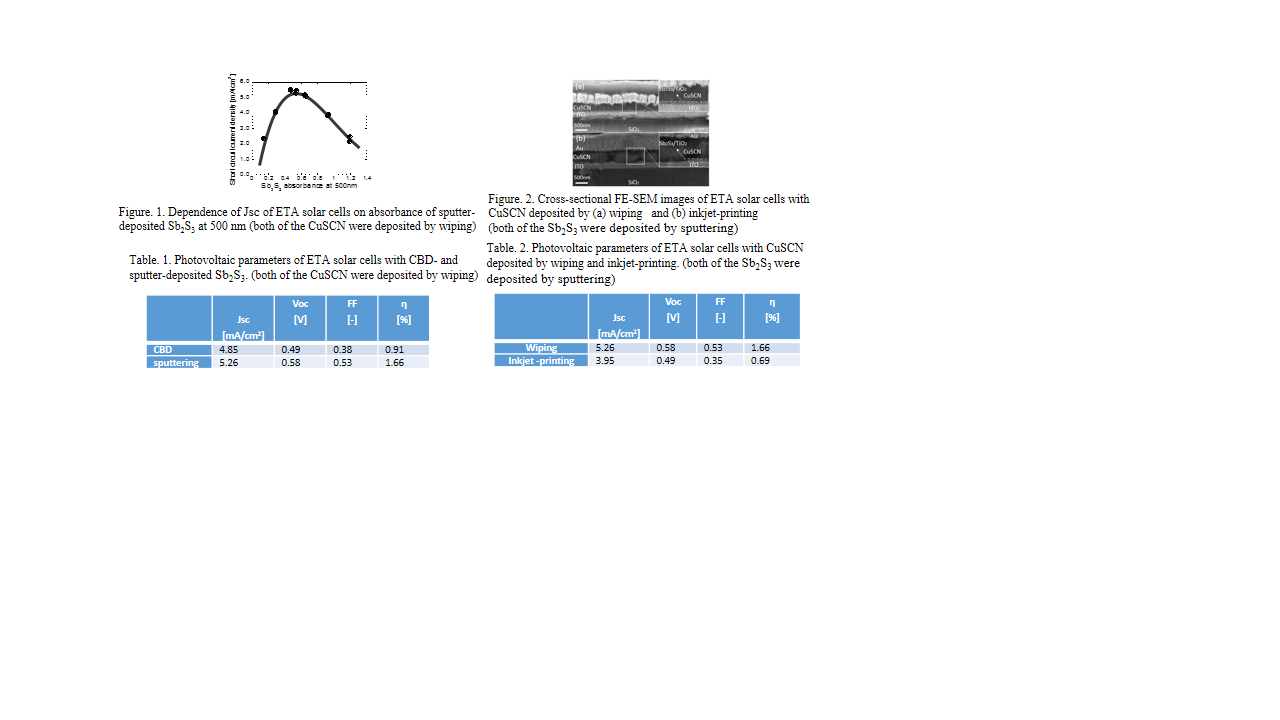