Expo Center, 1st Floor, Center and Right Foyers (Moon Palace Resort)
L. Leveau (LPICM, UMR 7647 CNRS-Ecole Polytechnique, Route de Saclay, 91128 Palaiseau, France), B. Laďk (ICMPE/GESMAT, UMR 7182 CNRS-UPEC, rue Henry Dunant, 94320 Thiais, France), J. P. Pereira-Ramos (ICMPE-CNRS), A. Gohier, P. Tran-Van (Renault Research Department, 78288 Guyancourt, France), and C. S. Cojocaru (LPICM, UMR 7647 CNRS-Ecole Polytechnique, Route de Saclay, 91128 Palaiseau, France)
One of the most promising anode material for Li-ion battery is silicon since it can insert large amounts of lithium and deliver a very high theoretical capacity of 3580 mAh.g-1 compared to commercial graphite anodes (372 mAh.g-1). However, its drawback is to undergo huge volume variations during lithium insertion (around 300%), leading to morphological damage and loss of capacity upon cycling. The use of nanostructures such as silicon nanowires (SiNWs) has already proved to enhance the performances of such electrodes thanks to a better accommodation of volume changes and a direct electrical contact with the current collector1,2. For further improvement of the cycle life, more complicated structures have been proposed, like coated nanowires3 or silicon nanotubes4 that both require a several steps synthesis. Here, however, the electrochemical investigation is made on bare silicon nanowires without any structure or surface optimization and the stability is improved by working on the cycling conditions. The electrolyte used in this study is LiPF6 (1M) in a standard mixture of ethylene carbonate (EC) and dimethyl carbonate (DMC), with fluoroethylene carbonate (FEC) as an additive5. The capacity is limited to an intermediate value of 900 mAh.g-1and a high current rate of 1C is used. The influence of the end of delithiation cut-off voltage is investigated and proves to be of great importance for the capacity retention of the electrode. An increasing number of cycles is obtained when lowering this upper cut-off voltage, from 660 cycles with 2 V, to more than 2300 cycles with 0.6 V. Moreover, for the more stable cycling, an excellent coulombic efficiency, above 99.5 %, is reached after only 20 cycles. It then keeps increasing to stabilize around 99.8 % after 500 cycles.

SEM images of the electrode were made in the delithiated state, at different stages of the cycling, to investigate the evolution of the electrode morphology and thickness. It appears that the reduced delithiation cut-off voltage leads to the formation of a more compact Solid Electrolyte Interphase (SEI) at the beginning of the cycling and less cracks are formed in the material at the end of the delithiation. A partial dissolution or reoxydation of the SEI layer probably occurs at higher potential, which is detrimental for the reversibility of the cycling and for the mechanical strength of the electrode. In the case of a reduced cut-off voltage, however, once the thick layer of SEI is formed, the morphology of the electrode remains rather stable. This SEI probably works as a mechanical support for the electrode and prevent further electrolyte degradation, which leads to the exceptional electrochemical stability. 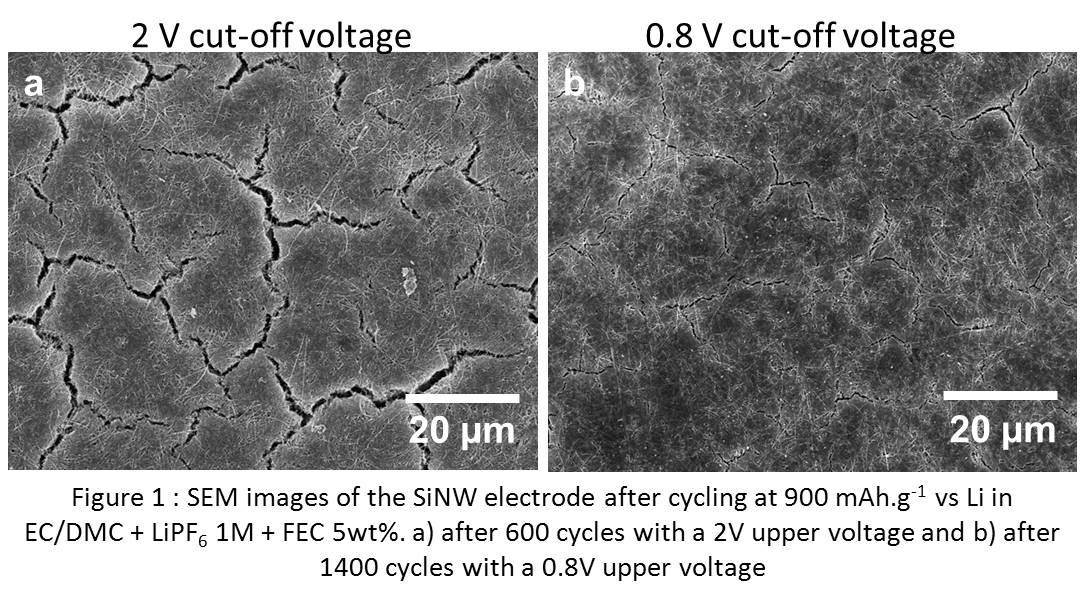