Recent research has resulted in significant improvements in the energy density and cycle life of Na batteries.  For instance, FEC electrolyte additive has shown to be beneficial for cycling hard carbon and NaNi1/2Mn1/2O2electrodes [1].  However, Na-ion studies have almost exclusively employed Na half-cells, in which severe dendrite and impedance growth can occur at the Na electrode during cycling [1,2].  Another disadvantage half-cells is that the counter electrode provides a huge excess of Na or Li metal, potentially masking the effects of alkali metal consuming reactions unless the coulombic efficiency (CE) is precisely measured [3].  This effect can make the working electrode appear to have long cycle life when in a full cell it would perform poorly.  Recently symmetric cells have been suggested for testing the performance of Li-ion electrode materials and electrolytes [3], enabling the precise measurement of CE, cycle life and electrolyte reactions without the need for a Li metal electrode.

In this study the detrimental effects of Na metal electrodes on the cycling of half-cells were confirmed.  Half cells with electrolytes containing NaPF6 or NaTFSI salts with EC/DEC 1/2 v/v were found to cycle well, while NaPF6 or NaTFSI in PC-based electrolytes suffered from reactions with the Na electrode leading to severe capacity fade after only about 10 cycles.  NaCrO2symmetric cells were then used to investigate the cycling performance of the same electrolytes.  Electrolytes that performed poorly in half-cells were found to perform well in symmetric cells.

Electrodes were an 80/10/10 weight ratio of NaCrO2, carbon black and PVDF on Al foil. 2325 coin-type half and symmetric cells used electrolytes comprising either EC/DEC (1:2) or PC solvent with 1M NaPF6, 1M NaTFSI or a combination of 0.7M NaTFSI and 0.3M NaPF6.  Symmetric cells were constructed from two nominally identical NaCrO2 electrodes, one charged to 3.5 V and the other charged to 3.5 V and then discharged to 2.0 V (vs Na/Na+).  Cells were cycled at a rate of C/10 (assuming 125 mAh/g capacity).

Figure 1 shows the voltage curve of a NaCrO2 half-cell (Fig. 1a) and a NaCrO2 symmetric cell (Fig. 1b) using 1M NaPF6 in PC.  The half-cell suffers from impedance growth and rapid capacity fade after about 20 cycles.  The symmetric cell exhibits no growth in impedance and little capacity fade after 50 cycles.  In this case, the half-cell results might lead one to believe that NaCrO2 with 1M NaPF6in PC is a poor choice and therefore does not merit further study.  However, the symmetric cell result shows this to be an excellent combination of electrode and electrolyte, achieving a CE of 99.94%.  CEs of 99.97% were achieved with other conventional electrolytes with no additives.  We believe these are the highest CEs for Na-ion battery materials reported so far.

Electrolytes in which good cycling is achieved in half-cells may not be optimum for the working electrode.  In a symmetric cell, there is no Na metal, so any capacity fade that occurs is a reflection of the working electrode performance alone.  Since Na metal has proven to be much more reactive towards electrolyte than Li metal, symmetric cells are especially important for evaluating Na battery material and electrolyte performance. 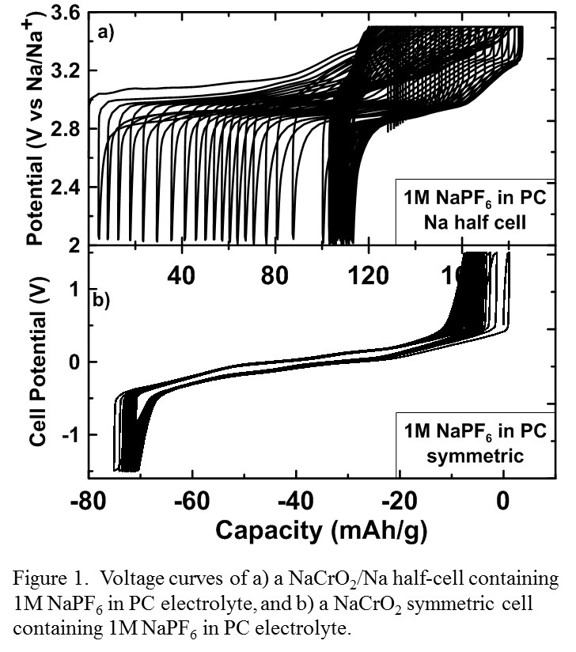