It has long been recognized that STT-MRAMs can be used as storage-class memory [2]. By using STT to write, stray fields causing unwanted writes on neighboring devices are eliminated. There is nothing that fundamentally prohibits MTJs to be scaled down to below 20 nm size, and the processing is compatible with Si technology. 64 Mbyte STT-MRAM chips are indeed now manufactured by Everspin [3], but there are great challenges that need to be overcome to realize STT-MRAM storage-class memories. The purpose of this talk is to highlight some of these challenges from a materials and physics perspective.

One challenge is related to the current that is needed to write. Enough current has to be supplied by a Si-MOSFET transistor. As the current scales with the channel width, a large current requires a large transistor, which sets a lower limit on the footprint of the device. A large write current also impacts the reliability of the device: a moderately large write current degrades the device over time, while a much larger current still may cause a dielectric breakdown in the thin insulating barrier in the MTJ [4]. Therefore, a substantial effort has gone into either device designs or materials development that may allow for a low enough write current that the device can operate reliably while writing with certainty. As an example, dual-MTJs consisting of two insulating barriers have been proposed as means of reducing the required write current [5]. An issue here is that it is very difficult to manufacture arrays of dual MTJs with sufficiently narrow distributions of resistance in both high and low resistance states because of the way the materials in an MTJ grow on one another, and the restrictions on materials sets and crystallinity required for sufficiently high magnetoresistive ratios.

Current available STT-MRAM use shape anisotropy – elliptical devices – with the magnetization in  the plane of the ellipse to produce stable magnetization states along the long axes of the ellipse. This leads to large variabilities due to process variations. One way to decouple the energy barrier that gives stability from process variation is to use perpendicular anisotropy [6,7], in which the magnetization points out of the plane of the layers (Fig. 1). This gives rise to other challenges such as finding materials with sufficient anisotropy that can be manufactured, are stable, and give rise to high enough tunneling magnetoresistance.

In addition to these, and other, materials challenges, there are issues that are beginning to emerge for small magnetic elements. The required write current is in a simple theory proportional to the intrinsic magnetic damping, so reducing the damping reduces the write current. Recent research [8] has shown that damping in nanoscale magnetic elements is highly dependent on size and the dynamical mode of the magnetization. This necessitates a fundamental understanding of the actual inhomogeneous and incoherent motion of the magnetization during reversal, and in addition also a better understanding of the fundamental coupling between spin-polarized conduction electrons and inhomogeneous magnetization motion or spin wave modes.

Part of this work was supported by the U.S. Department of Energy, Office of Science, Materials Sciences and Engineering Division. Argonne National Laboratory is operated under Contract No. DE-AC02-06CH11357 by UChicago Argonne, LLC. 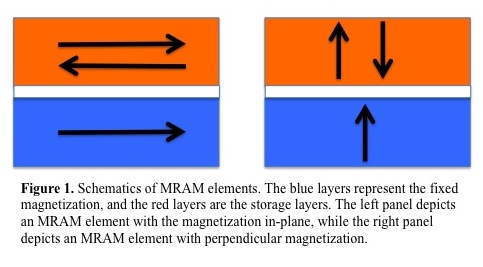