Expo Center, 1st Floor, Center and Right Foyers (Moon Palace Resort)
K. C. Lin, C. D. Valle, and Y. F. Huang (Department of Biomedical Engineering and Environmental Sciences, National Tsing Hua University)
Core-shell nanostructures have attracted considerable interest as a new class of nanomaterials due to the fascinating physical and chemical characteristics relative to their single-component counterparts. Herein, a facial and low-cost approach was reported for the synthesis of core-shell nanostructures. By using the citrate-stabilized gold nanoparticles as seeds, the gold@iron oxide/oxyhydroxide nanostructures were prepared via an electroxidation of iron nail at 1.0 V between the electrodes in aqueous solution. The possible formation processes were as follows:

In the presence of dissolved oxygen,

amorphous ferric-oxyhydroxides and/or ferric oxide were obtained as precipitate.

Two iron nails were inserted into the gold nanoparticles solution (10 mL) as two electrodes placed parallel to each other. Potential of 1.0 V were applied to the electrodes using a direct current (DC) power supply. A detailed illustration of the experimental device was demonstrated in Figure 1. After 0 to 420 min continuous stirring, the anode iron nail corroded, and a gradual growth of a dense shell appeared on each gold nanoparticle. The solution was then centrifuged at 1,500g for 30 min to remove the free iron oxide/oxyhydroxide precipitate. The obtained core-shell nanoparticles were re-suspended in 1.0 mM citrate buffer (pH 6.8) for further experiments.

As depicted in Figure 1, a simple electrochemical setup was used to synthesize the gold@iron oxide/oxyhydroxide core-shell nanostructures. The iron nails were used as both the anode and cathode, 0.38 mM citrate buffer (pH 4.3) as the electrolyte. With the reaction time increases from 0 to 420 min, the shell coating proceeds. The surface plasmon resonance peaks of the core-shell nanoparticles became more prominent and red-shifted form 530 nm to 560 nm (Figure 2A). Transmission electron microscopic (TEM) images in Figure 2B further confirm the as-synthesized core-shell structures. The diameter of the gold core was about 49 nm, while the shell thickness was 0, 5, 10, 13, and 16 nm through adjusting the reaction time, respectively. The lattice spacing of the core structure in HRTEM was around 0.22 nm, corresponding to Au (111) fcc planes. These nanoparticles were coated with an amorphous layer on their surface. The iron oxide/oxyhydroxide shell structure was characterized by XPS analysis (data not shown).

Due to the electromagnetic field enhancement surrounded the metallic surfaces under laser excitation, gold nanoparticles are very attractive SERS substrates. Figure 3 shows the SERS spectrum of 2-naphthalenethiol (NTP)-labeled gold nanoparticles (Au-NTP). In the experiments, the laser at 785nm was used as an excitation light. All the SERS signals are characteristic of the NTP molecules on the gold substrates. After the deposition of the outer iron oxide/oxyhydroxide shell, SERS signals were retained well after the introduction of the amorphous shell on the NTP-labeled gold nanoparticles.

In conclusion, we have demonstrated a facile synthesis route for the preparation of gold@ iron oxide/oxyhydroxide core-shell nanostructures. With the incorporation of SERS reporter, these nanocomposites displayed good SERS performance, which has great potential for multiplexed imaging in living cells 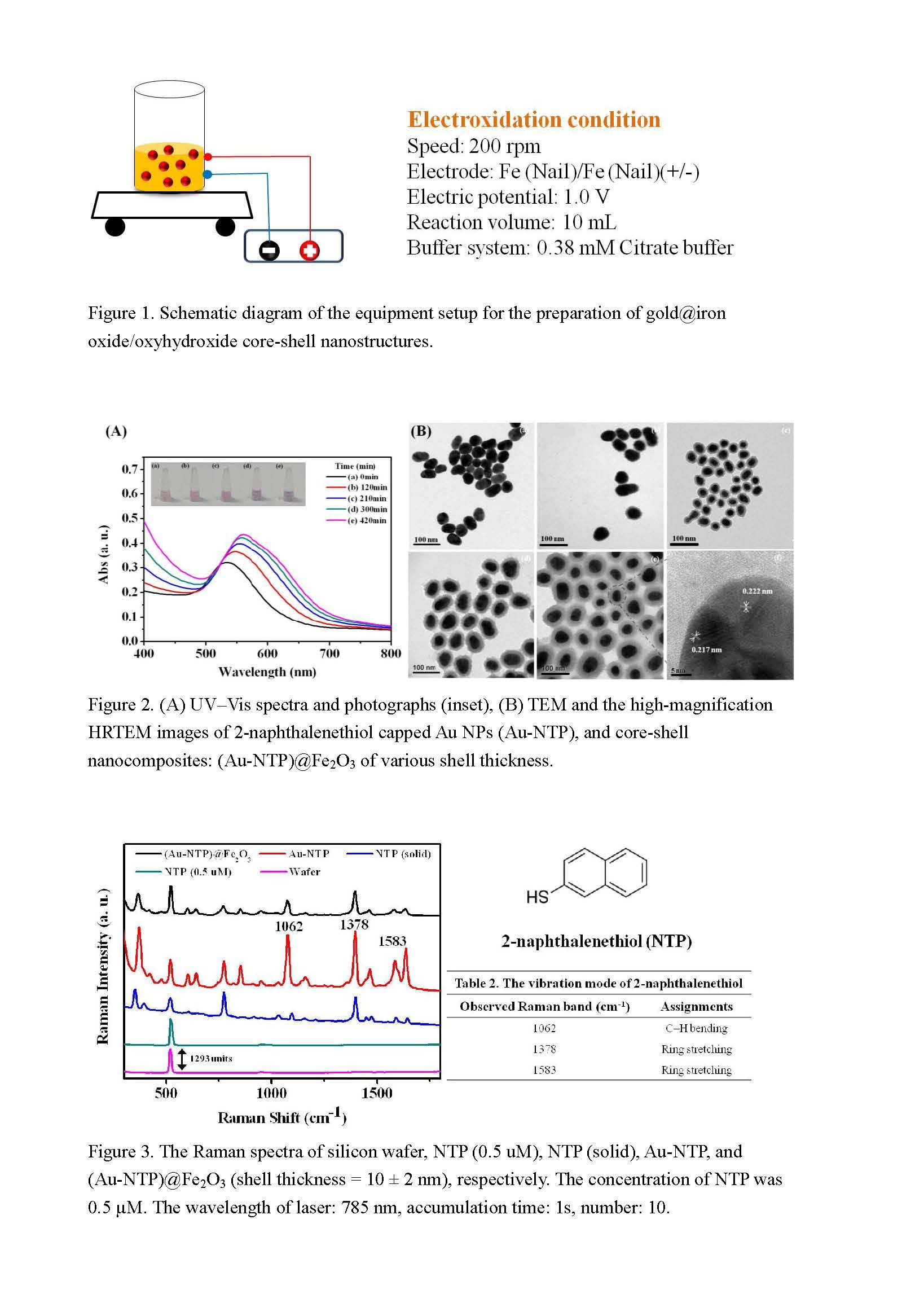