Expo Center, 1st Floor, Center and Right Foyers (Moon Palace Resort)
D. Horiguchi, T. Tsukatsune, Z. Noda, A. Hayashi, and K. Sasaki (Kyushu University)
For polymer electrolyte fuel cells (PEFCs), the electrocatalysts on which Pt nano-particles are homogeneously dispensed on carbon black (Pt/C) are widely used. However, during the fuel cell start-stop cycles, the potential of the cathode can reach up to ca. 1.5VRHE, resulting in a severe carbon corrosion. Tin oxide (SnO2) has been studied as an alternative support material because of its thermochemical stability. We have demonstrated negligible degradation within 60,000 cycles in a half-cell test [1-3], indicating that Pt/SnO2 electrocatalyst can exhibit considerable durability. However, relatively low electrical conductivity in such semiconducting oxides often leads to poor cell performance. Here, we aim to develop Pt/SnO2 electrocatalyst with both high durability and high activity, using conductive fillers as backbones of electrocatalysts.

We selected vapor grown carbon fibers (VGCF) and acetylene black (AB) as possible conductive fillers. SnO2/VGCF and SnO2/AB were synthesized via the ammonia co-precipitation method. Then, the impregnation of Pt particles was made using a Pt(acac)2 method to prepare both Pt/SnO2/VGCF and Pt/SnO2/AB. Nanostructure of electrocatalysts was observed by STEM. To evaluate the electrochemical activity of these electrocatalyst, electrochemical surface area (ECSA) was measured by cyclic voltammetry (CV). The durability of electrocatalysts under the cathode condition was evaluated, where the electrocatalysts were subjected to the potential cycles between 1.0 and 1.5 VRHE at a scan rate of 50 mV s-1 in the measurements.

Figure 1 shows the nanostructure of Pt/SnO2/VGCF, revealing the selective impregnation of Pt particles on SnO2 rather than the conductive fillers. Figure 2 shows the ECSA of various electrocatalysts as a function of the number of cycles. ECSA of Pt/SnO2/VGCF was about three times as large as that of Pt/SnO2 before CV cycles. After 60,000 cycles, the former is about five times as large as the latter. With respect to the retention of ECSA before and after the CV cycles, Pt/SnO2/VGCF kept 65.0% of the initial ECSA value and Pt/SnO2/AB kept 58.7%. These results indicate that electron-conductive fillers can be used as the conductive backbones of the PEFC electrocatalysts using semiconducting oxide supports. 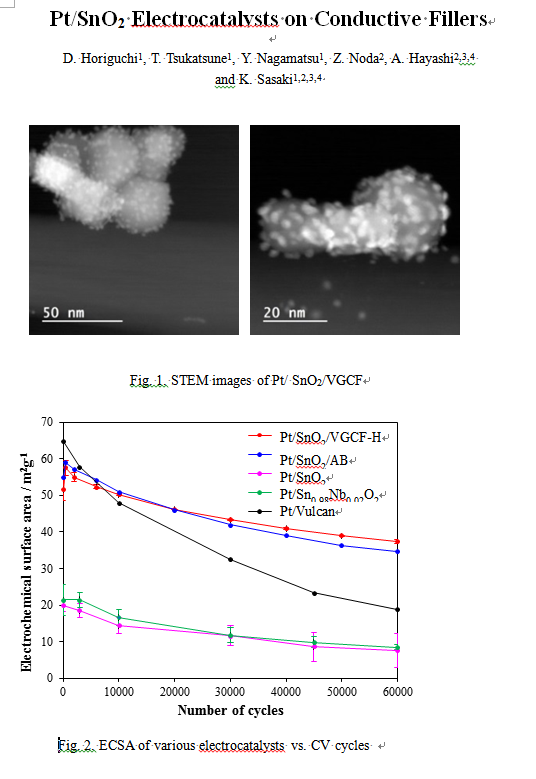