Expo Center, 2nd Floor, Alfa Room (Moon Palace Resort)
J. Srinivasan, M. J. McGrath, and R. G. Kelly (University of Virginia)
The critical conditions of mass transport and localized chemistry required for a 1-D pit to grow stably were first examined by Galvele (1), resulting in the pit stability product (i*x) as the key parameter of interest. Experimentally determining this parameter requires a quasi-steady-state configuration (2) such as that under a salt film (3, 4). The lowest potential at which this film is stable has been termed the transition potential Et (5). However, pitting is known to proceed stably at potentials lower than Et (6, 7), and hence Et cannot be used as a conservative lower bound. This means that a salt film is not critical to stability and the critical pit stability product (i*x)crit = f*(i*x)salt film, where f is some fraction of saturation. The repassivation potential Erp, the potential below which all existing pits passivate, has been proposed as an alternative critical potential (8). In this regard, Erp has to be examined in terms of diffusive transport in order to relate it to pitting stability. Moreover, studying the effects of experimental variables on (i*x) and Erp enables understanding their influence on pitting stability, providing information for corrosion mitigation strategies.

A cyclic artificial pit technique was developed to enable high-efficiency, automated data collection and analysis. This approach utilized an artificial pit constructed from stainless steel wire (diameter 50-100 μm), grown to different depths applying a high potential in neutral chloride solution for different time periods, after which a cathodic potentiodynamic sequence was employed, a variation of the method of Sridhar and Cragnolino (8). The entire sequence was looped multiple times.  The pit stability product under a salt film, (i*x)salt film was obtained from the diffusion-limited dissolution current density at different depths (5), and Erp was noted as the potential at which a significant number of current density data points were lower than 30 μA/cm2 (8, 9). This approach enabled the measurement of both critical parameters from the same experiment and the direct correlation of Erp to pit depth and diffusive transport.

The high level of automation permitted sampling a wide region of parameter space. The large volume of data from this technique facilitated replication and a statistical treatment of (i*x) and Erp. Data obtained were also utilized to develop a mass-transport-based model relating Erp and the surface concentration at the edge of pit stability, based on which an estimate of the critical degree of saturation, f was obtained.

Simultaneous examination of the effects of different variables on Erp, salt film solubility, and kinetics was possible. As shown in Figure 1, (i*x)salt film values of three stainless steels tested were the same within the limits of experimental scatter. Erp for 17-4 PH was seen to be slightly higher than for 316L. Erp for 17-7 PH was much lower, leading to the hypothesis that electroactive copper in 17-4 PH may contribute to interfering redox reactions (10), yielding an artificially high Erp. Current-peak analysis (11) using data from the same experiment allowed this hypothesis to be tested.

Studies have focused on the inhibitory effects of oxyanions on the pitting potential and therefore, pit initiation (12). However, examining the effects of these anions on pit repassivation and stability is important to understand their influence on pit growth. As shown in Figure 2, salt film solubility and repassivation potential are affected differently by the oxyanions. Preliminary analysis shows that the oxyanions may enhance the cathodic reaction in the pit solution, resulting in a higher measured Erp. Real-time ohmic compensation could also be included in the polarization sequence inside the loop to examine the approach to Erp, which may help understand the inhibitory mechanisms better. 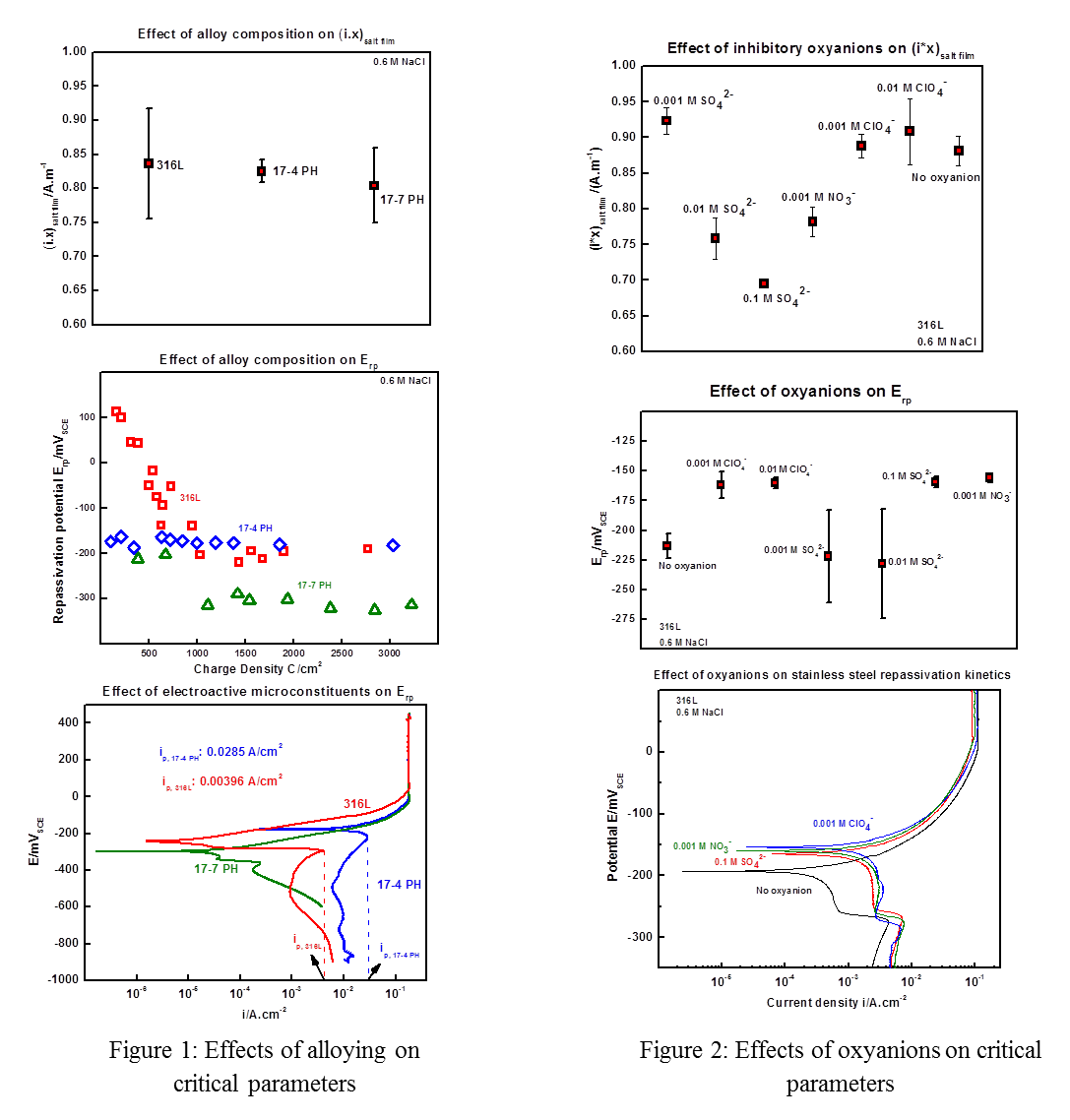