Sunrise, 2nd Floor, Star Ballroom 7 (Moon Palace Resort)
P. Murmann (University of Münster MEET), N. Kalinovich, M. Shevchuk (Jacobs University Bremen), I. Cekic-Laskovic (MEET Battery Research Center/ Institute of Physical Chemistry, University of Münster, Corrensstrasse 46, 48149 Münster, Germany), M. Winter (MEET Battery Research Center, University of Muenster), and G. V. Roeschenthaler (Jacobs University Bremen)
Lithium-ion batteries (LIBs) have surpassed any other battery technology for consumer electronics and mobile devices in the last decades mostly due to the high energy density and the lack of memory effect. Following the invention of the concept, a lot of effort has been put into improving the energy, the power as well as the safety of the LIBs. [1] Besides other aspects, the flammability of carbonates, frequently used as electrolyte components in most batteries, is one of the major drawbacks. There are different approaches to overcome this problem. One approach is to replace the liquid electrolytes with, for example ionic liquids, gel polymer electrolytes or even solid electrolytes. [2]. In another approach flame retardants (FRs) are added to suppress the flammability of the electrolyte to the point at which it becomes non-flammable for example phosphorous containing compounds. [3] Xu et al. tested different phosphate containing compounds with varying concentrations.[4, 5]

Electrolyte compositions with different concentrations of the FRs were prepared using standard electrolyte components with 1 M Lithium hexafluorophosphate as conducting salt and a mix of carbonates as solvent. Since the goal was to improve the flammability of the electrolyte the crucial investigation is depicted by the self-extinguishing time (SET), which is a common way in literature to display the flammability of a certain liquid. To test the possible use of the mixtures in LIBs constant current cycling experiments were performed in half-cells on anode material (T44 graphite) as well as on cathode material (LiNi1/3Mn1/3Co1/3O2 (NMC)). Physical properties like the flashpoint, the viscosity and the ionic conductivity completed the measurements.

Figure 1 displays the flammability of the tested electrolytes and the content in % is plotted vs the self-extinguishing time (SET) in s/g.

It was shown that the tested phosphates have potential for application as components in non-flammable electrolytes, which yields in an increase in safety without a big trade-off in performance. 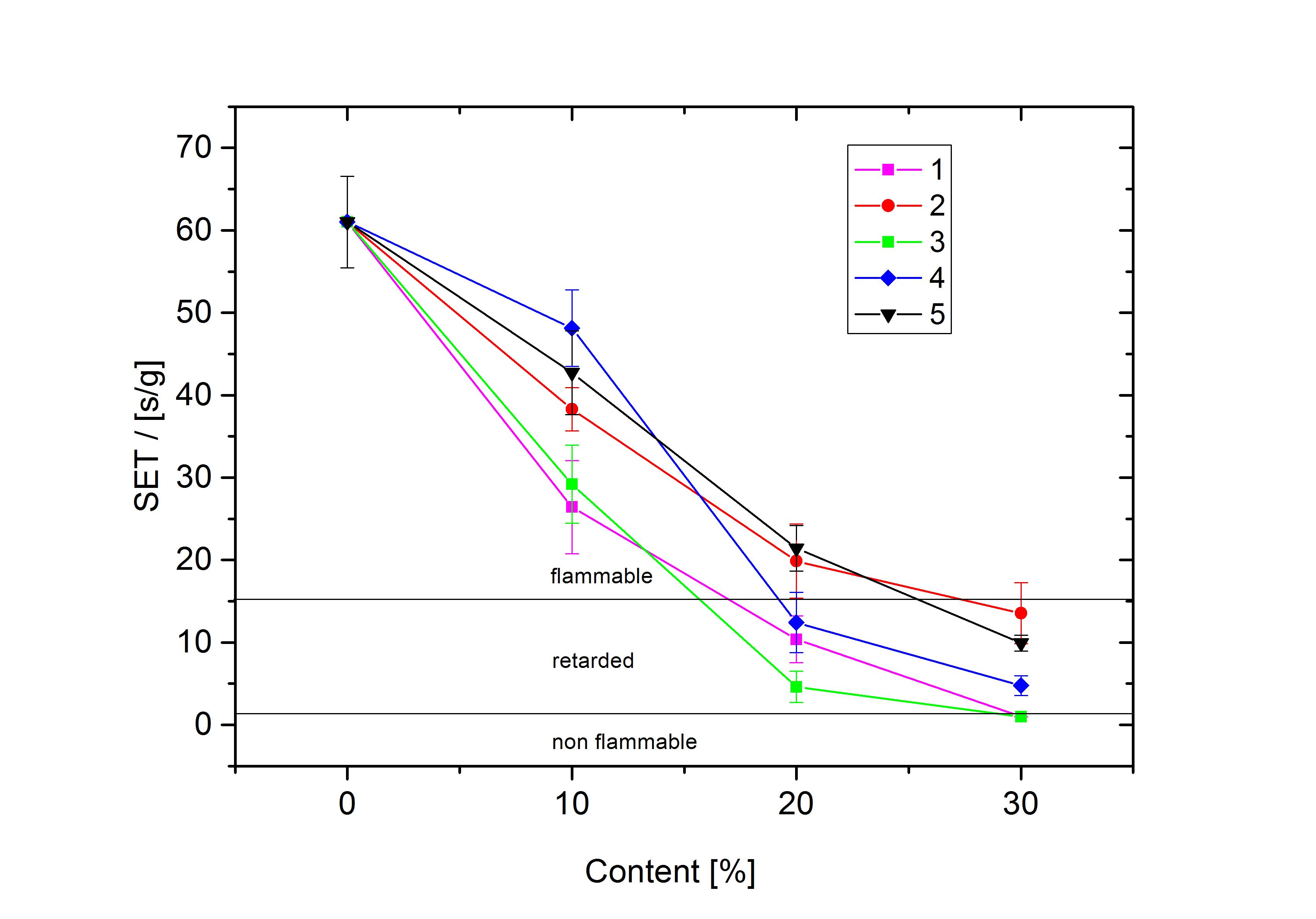