To obtain higher gravimetric and volumetric capacity, Sn-based materials have attracted much interest as replacements for the conventional carbonaceous anode materials of Li-ion batteries, because the Sn materials has higher theoretical capacitance (Li4.4Sn: 994 mAh g-1) than that of graphite mentioned above. Pure Sn metal, however, exhibits poor cyclic lifetime due to its mechanical scalability from volume expansion and contraction of the pure Sn metal during lithium insertion and extraction processes. During the charge-discharge cycles, this mechanical scalability will crack and deteriorate the electrode, significantly affecting the mechanical stability and cyclic lifetime of the battery.

In this study, we will report porous Sn-TiO2composite films fabricated on Cu sheets, to provide space for the volume change of Sn in the charge-discharge actions as anode materials for Li-ion batteries.

Experimental. Various nanoporous Sn-TiO2 composite films were coated on Cu sheets by a hybrid electroplating, i.e., combining electro-deposition with electrophoric deposition, using an EtOH-H2O mixed bath mainly containing SnCl2 and TiCl3.The effects of ratios of Sn2+/Ti3+ and EtOH/H2O, current density, and operating temperature on the formation and electrochemical behaviors of the films were investigated. Moreover, in order to remove water absorbed in the films and improve the adhesion between the films and Cu substrates, the Sn-SnO2-TiO2anodes were heated at 423 – 473 K for 2 – 4 h in air.

Electrochemical charge-discharge performances of the Sn2-TiO2 films electrodeposited on Cu sheets as binder-free anodes were investigated using home-made pouch cells assembled in an Ar-filled glove box. The cathode was utilized with a lithium metal foil, and the electrolyte solution was made of 1M LiPF6 in a mixture of ethylene carbonate (EC), dimethyl carbonate (DMC), and diethyl carbonate (DEC) with a volumetric ratio of 1:1:1, respectively. The cells were charged and discharged at 0.1 A g-1 by a battery test system, and the cut-off voltage range was 0.01 – 2.0 V (vs. Li/Li+) at 303 K.

Results and Discussion. Figs. 1a-1c show the representative FESEM images of as-deposited porous Sn-TiO2 films on Cu sheets, which were fabricated in plating baths with different ethanol/water ratios. It can be seen that the films composed of nano-flakes or nano-needles, thus making a networked nanoporous structure. The morphologies of the electrodeposited films were depended predominantly on ratios of Sn2+/Ti3+ and EtOH/H2O in electroplating baths, as well as the current density and operating temperatures. After heat treatment at 473 K for 2h (Fig.1d), the Sn nano-crystals grew into nano-sheets with micrometer sizes in across while remaining the nanoporous structure.

Moreover, according to EDX and XPS analysis, the electrodeposited films consisted of Sn, SnO2, and a small amount of TiO2in 1–6 at%, irrespective of heat treatment. XRD measurement confirmed that the Sn is polycrystalline with a preferential in Sn (200) facet, which is different from the conventional Sn electrodeposits from a sulfuric-based bath that has a preferential Sn (220) facet. 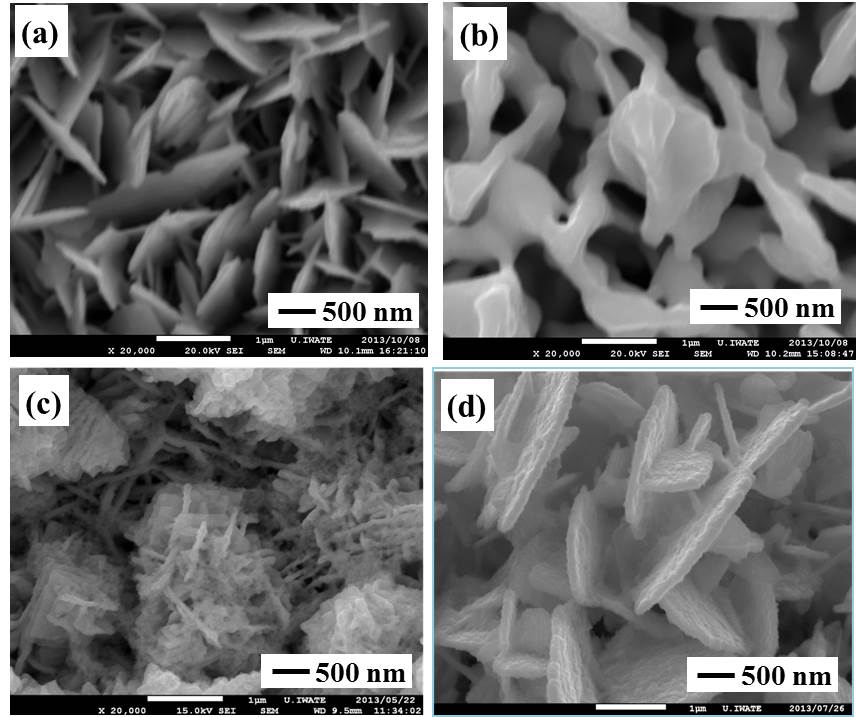