Sunrise, 2nd Floor, Mars 1-4 (Moon Palace Resort)
S. Tembhurne, M. Dumortier, and S. Haussener (Laboratory of Renewable Energy Science and Engineering, EPFL)
Direct conversion of solar energy and water into chemical energy via photoelectrochemcial (PEC) processes is one viable route for renewable fuel processing and energy storage. Integrated PEC devices, i.e. composed of an integrated traditional photovoltaics component and an electrolyzer component, allow to circumvent some of the challenges imposed by solid-liquid interface in traditional PEC devices, and operate at higher efficiencies than externally wired (non-integrated) PV plus electrolyzer devices 1. In order to ensure the economic competitiveness of integrated devices compared to traditional PEC devices, concentration of irradiation is considered. We proposed a novel integrated design, shown in fig. 1, combining EC, PV and concentrator. The concentrator system consists of a lens array and a glass waveguide having a bottom layer covered with a phase change material, which allows for self-tracking of the sun by infrared absorption and local shape deformation 2. The light, incident in –ve z-direction, after being concentrated within the waveguide, travels in the x-direction towards PV, where it produces electron-hole pairs. The holes are delivered to the anode causing oxidation of water and production of O2 and protons at the catalytic sites; these protons travel to the cathode through the polymeric electrolyte where they are reduced by the electrons supplied from the PV’s n-terminal to produce hydrogen. A water channel between the waveguide exit and the PV cell is introduced to cool the PV cell as well as preheat the reactant (water) before it enters the anodic electrolyser channels.

Fig. 1  (a) Schematic (not to scale) showing 3D structure of the integrated PEC device. The 2D simulation domain is the xy-plane.

We developed, a coupled 2D multi-physics model of the proposed concentrated PEC device. The model includes radiative heat transfer in the concentrator, electromagnetic wave propagation in the semiconductors (a triple junction solar cell), charge generation and transport in the photoabsorbers and the integrated electrolyzer (polymeric electrolyte and solid electrode), electrochemical reaction at the catalytic sites, fluid flow and species transport in the channels delivering the reactant (water) and removing the products (hydrogen and oxygen), and heat transfer in all components. Finite element and finite volume methods were used to solve the governing equations and the corresponding boundary conditions. Complex temperature dependencies of the material properties were included in different physics’ models.

The model allowed to investigate and optimize the thermal management in the integrated PEC device, highlighting that the PV performance benefited with decreasing temperature (water acting as coolant, taking the heat from PV) while the electrochemical performance benefited from the increasing temperature (heated water used as reactant). Cooling power of the water was found to be dependent on its mass flow rate and length of the water channel. The device was designed to work in the plateau region of the PV – a triple junction cell made of Ga0.51In0.49P/GaAs/Si – and hence its operation was unaffected by the decreasing open circuit voltage with increasing temperatures. We observed an increase in the amount of H2 produced with increasing light concentration as the operating current of the integrated PEC increases. Parametric studies on device dimensions, light concentration, anodic and cathodic catalyts, water mass flow rate, and PV materials allowed to provide an optimum range for different device design and material characteristics for the best perfoming integrated concentrated PEC.

The model developed shows promise to be a valuable design and optimization tool for integrated PEC cells working with concentrated irradiation and at elevated temperatures.

Fig. 2  The simulation flow of the Integrated PEC system.

[1] S. Haussener et al. Simulations of the irradiation and temperature dependence of the efficiency of the tandem photoelectrochemical water-splitting systems, Energy Environ. Sci., 2013. 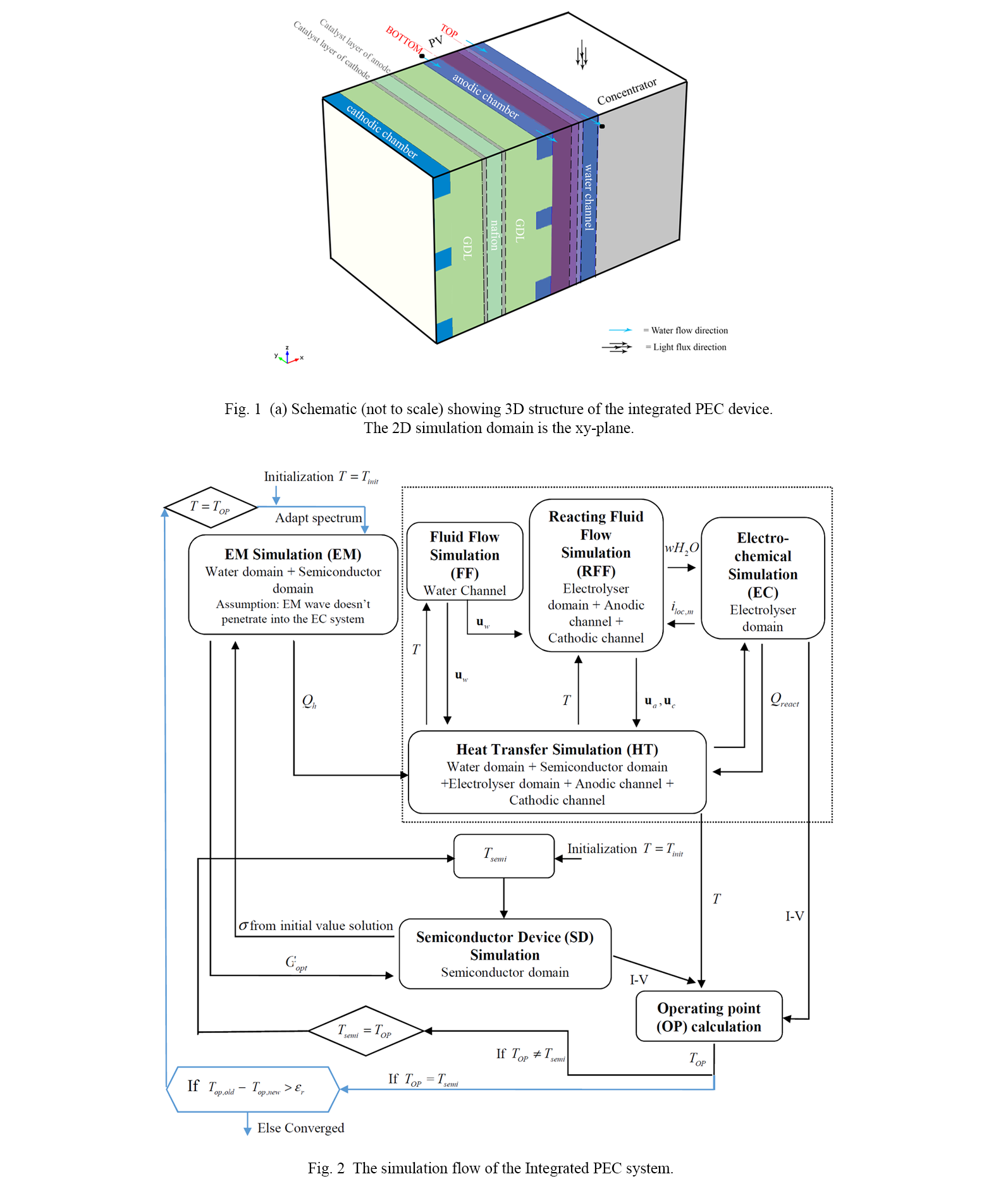