Expo Center, 1st Floor, Center and Right Foyers (Moon Palace Resort)
S. Mukherjee, A. Bates (University of Louisville), S. C. Lee (DaeguGyeongbuk Institute of Science & Technology (DGIST)), J. Kim (DGIST), O. Kwon (Keimyung University), B. Son (DGIST), and S. Park (University of Louisville)
1. Introduction – Solid state batteries overcome many of the essential drawbacks of liquid electrolyte batteries, such as liquid electrolyte and leakage issues [1]. Another major issue is the degradation of the Li based cathode from continuous cycling due to a change in its microstructure [2]. Nanoscale coatings are thought to prevent the degradation of the cathode by acting as a protective layer on its surface [3, 4]. This paper studies the performance of lithium cobalt oxide (LCO) based cathodes with and without protective coatings of Al2O3 and TiO2.

2. Fabrication procedures – Fabrication procedures entail the following stages: (i) Making the liquid lithium lanthanum tantalite (LLTO) electrolyte by a sol gel technique from its precursors and then vaporizing the liquid by exposing it to elevated temperature. The paste left behind is thoroughly dried and finely ground and is included as the solid state electrolyte. (ii) The cathode is made by thoroughly grinding lithium cobalt oxide (LCO) powders and then making slurry by mixing them thoroughly with PTFE binder, carbon powder, and alcohol. Pasted on to a stainless steel foil, this whole system acts as the cathode. (iii) The Atomic Layer Deposition (ALD) technique is used to deposit thin films (~6 nm) on the surface of the LCO cathodes to compare them with the pristine cathodes. (iv) The anode includes Li metal foil. Once this is complete, the three separate components are assembled into a coin cell.

3. Experimental steps and results – The characterization procedures are as follows:

(i) XRD and SEM study to check the phase of the solid state LLTO electrolyte, pristine LCO cathode, and cathodes with Al2O3 and TiO2 coatings and the surface morphology.

Figure 1 shows the XRD data of the LCO cathode with TiO2 deposition. The main Al2O3 peaks are seen and no TiO2 peaks are obtained, indicating the amorphous nature of the deposition.

(ii) TEM and XPS analysis to study the nature and actual thickness of the coating. This will give an idea about the actual depth of the deposition as well as the nature of electronic bonding at the surface.

From Figure 3 it may be seen that reduction potential shifts more to the right for the TiO2 coated cathode. The greater ΔV value exhibited by the coated cathode indicates greater energy needed for the reduction reaction owing to the deposition, and TiO2 has the highest ΔV value.

Figure 2 represents the XPS data of the LCO cathode coated with Al2O3, showing clearly the Al 2s and 2p and the O 1s peaks.

(iii) Cyclic voltammetry is performed within a voltage range of 3 V to 4.5 V and the applied current is 5 mA/s.

(iv) Cyclical performance of the cell.

4. Conclusion – Amorphous transition metal oxide coatings have been tried out. XPS data have shown the formation of the thin film. A rightward shift in the reduction potential demonstrated by the CV data indicates greater energy necessary which is a measure of the protective nature of the coating. Future work includes studies of the cycling performance of the cell with the coated cathodes. 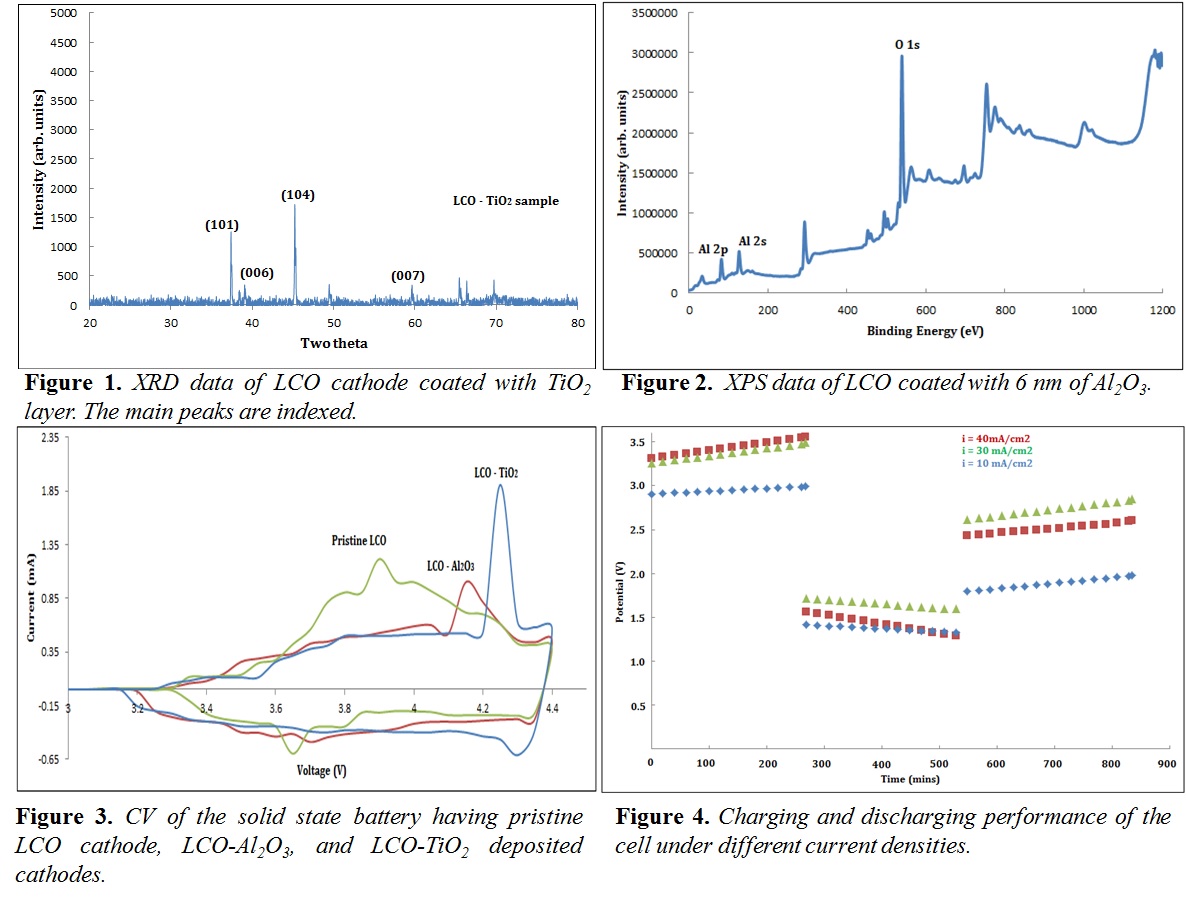