Expo Center, 1st Floor, Center and Right Foyers (Moon Palace Resort)
A. S. Dedyukhin, A. V. Shchetinskiy, V. A. Volkovich, L. F. Yamshchikov (Ural Federal University), and A. G. Osipenko (Research Institute of Atomic Reactors)
Precipitation method is one of the simplest direct techniques for determining solubility of metals in liquid alloys. The main parameter influencing the separation of liquid and solid phases is their density. In our case the difference of densities of gallium-indium alloys and intermetallic compounds of lanthanum with gallium and indium is sufficient for separation of solid (intermetallic compound) and liquid phases during holding the supersaturated alloy at desired temperature. In the present study solubility of lanthanum was determined in binary Ga-In alloys containing 21.4 (eutectic), 40 and 70 wt.% In at 298–1081 K.

Time required for achieving equilibrium in Ga-In-La system was determined in a preliminary set of experiments. The experiments were performed at constant temperature with the samples of liquid alloys taken at certain time intervals. The amount of lanthanum added to the alloy exceeded its solubility limit. An example of the obtained results for Ga-40wt.% In alloy at 423 and 673 K is shown in Fig. 1. The minimum time needed for reaching constant La concentration was four hours and in the subsequent experiments this time interval was used as holding time between sampling the alloy.

Solubility of lanthanum in Ga-In eutectic alloy at 298–1081 K is shown in Fig. 2. The temperature dependence of lanthanum solubility has an inflection around 515 K which is most likely associated with increasing viscosity of the liquid alloy and difficulties in precipitating solid phase.  Similar results were obtained for the alloys containing 40 wt.% indium at 428–983 K, Fig. 3, and 70 wt.% indium at 425–987 K, Fig. 4.

Analysis of the samples showed that in all studied Ga-In systems (containing up to 70 wt.% In) only intermetallic compounds of lanthanum with gallium were formed irrespectively of indium content in the alloy, the only difference being in the ratio between Ga3La and Ga6La. Decreasing gallium content in the alloy resulted in increasing fraction of Ga3La intermetallic compound in the solid phase. Indium in the studied systems acted merely as an inert additive. 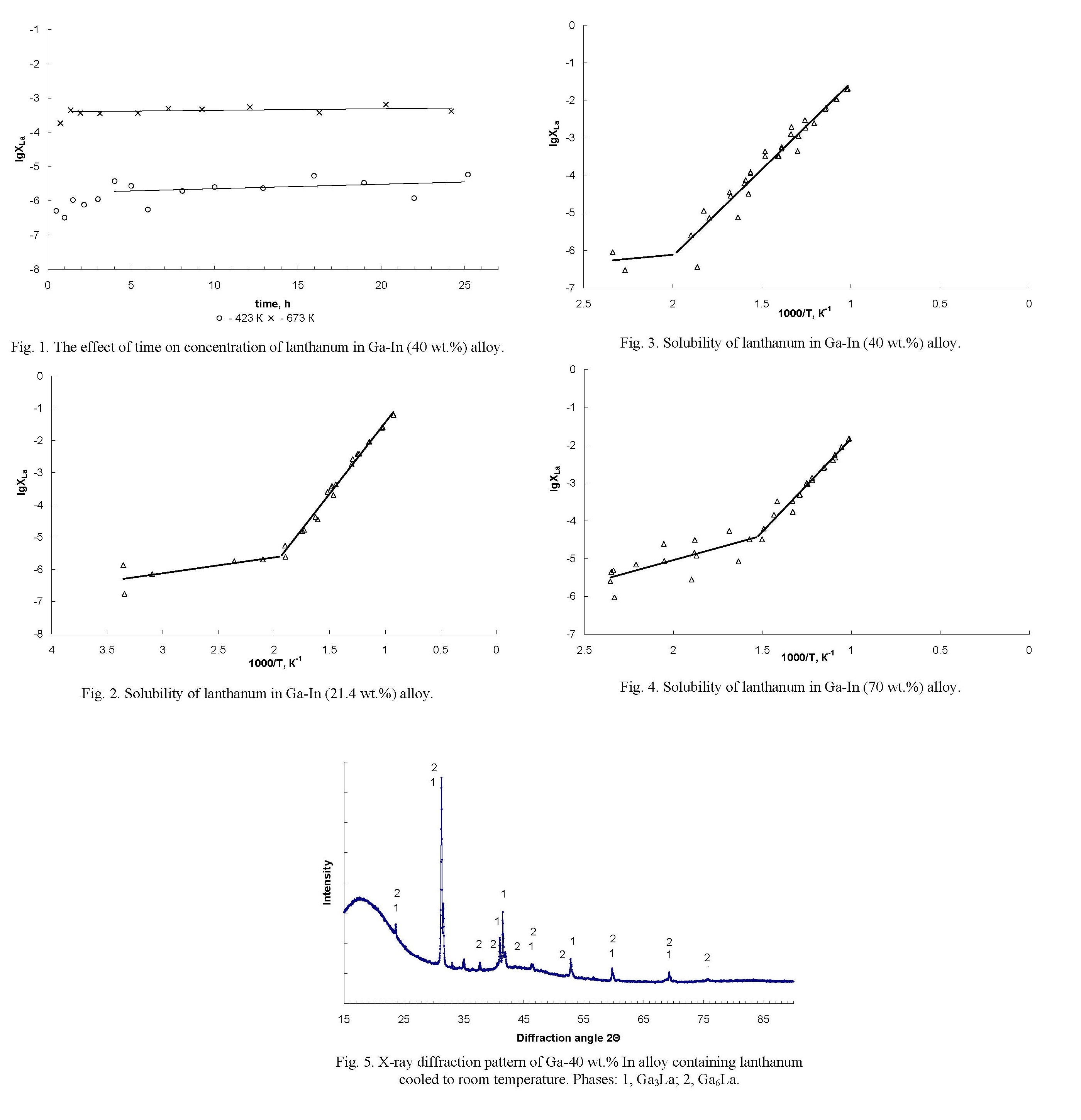