The aim of this work was to study how gold supplement affects the ORR activity on electrodeposited palladium. In order to achieve this goal palladium and gold were co-deposited onto glassy carbon (GC) substrate at a constant potential. The precursor concentration ratio was varied in deposition solution to achieve different Au-Pd coatings.  The surface morphology of Pd-Au alloys was studied with scanning electron microscopy and it was observed that the particle size does not change with changing palladium-to-gold ratio. Though there were some larger agglomerates but the average particle size was approximately 10 nm.

Electrochemical experiments were carried out in sulfuric acid and in potassium hydroxide solutions. From cyclic voltammograms the features of Pd and Au were observed.

The rotating disk electrode (RDE) method was employed for the oxygen reduction studies. In acid media the ORR activity depended strongly on palladium content and the half-wave potential of O2 reduction shifted positive with increasing Pd content in the deposition bath (Fig. 1a). The Tafel analysis was carried out which showed that the rate determining step is the sluggish transfer of first electron to O2 molecule (Fig. 1b). In alkaline media palladium and gold are both more active than in acid solution (Fig. 2a). The polarization curves of O2reduction for the Pd-Au coatings were similar whereas the ORR activity only slightly decreases with decreasing Pd content in the deposition bath. The Tafel behavior of ORR in alkaline solution is shown in Fig. 2b.

The RDE data were used to carry out the Koutecky-Levich analysis which showed that O2 reduction proceeds mainly through 4-electron pathway with some additional peroxide formation in sulfuric acid. The number of electrons transferred per O2 molecule (n) did not depend on potential for Pd-Au coatings, in contrast to bare gold electrode for which the value of n depends on potential.

In addition to the oxygen reduction studies, the process of hydrogen peroxide reduction in alkaline media has been also explored. The activity for peroxide reduction did not depend on the Pd content in the catalyst. The polarization curves were similar for all the Pd-Au coatings studied. 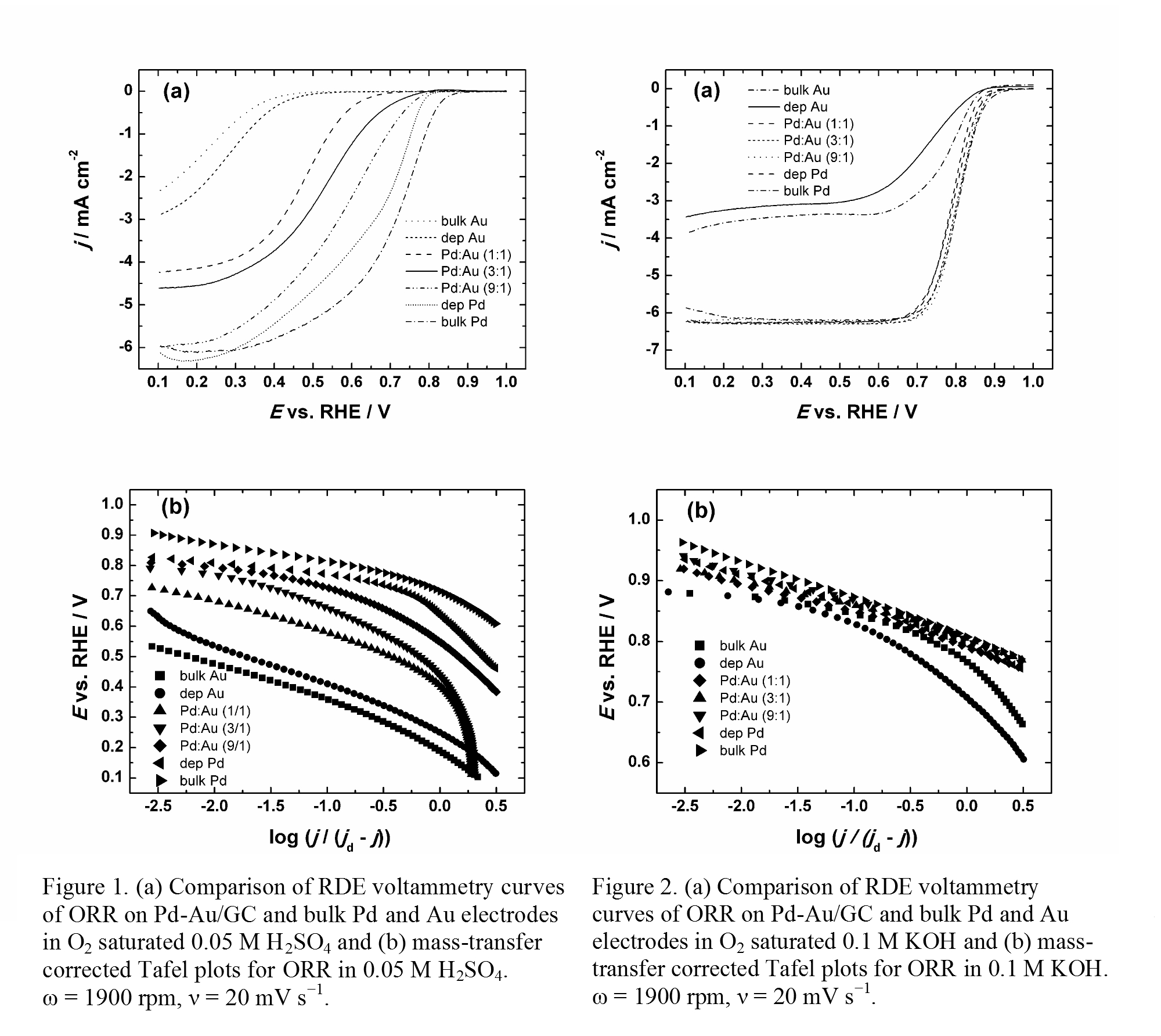