473
Study of the Consumption of Vinylene Carbonate in LiNi0.3Mn0.3Co0.3O2/Graphite Cells By Gas Chromatography Coupled with Mass Spectrometry (GC-MS)

The fate of VC during the first charge of LiNi0.33Mn0.33Co0.33O2/graphite cells was investigated using GC-MS measurements made on the electrolyte following a procedure described by Petibon et al.1.  Experiments were also made to determine at which electrode VC reacts subsequent to the formation cycle.

In order to measure the composition of the electrolyte at selected states of charge, the cells were first discharged to an open circuit potential near 0 V, and opened outside the glove box. The jelly roll was then put in a vial containing 10 mL of dichloromethane and shaken for 15 min. The supernatant was then filtered using a syringe filter. A few drops of the filtrate were added to a vial containing 10.0 mL of dichloromethane and 0.5 mL of distilled water, shaken for 5 min and set aside for another 5 min. The organic layer was then injected in the GC-MS for analysis. This procedure is described in detail in reference [1].

Figure 1 shows the amount of VC left in cells initially containing 2% VC charged to different voltage cut-off during the first charge (formation cycle), alongside the potential versus capacity curve. Figure 1 shows that while an important portion of the initial VC present in the cell reacts early on during the first charge (before a cell potential of 3.0 V), there is still a substantial amount of VC that reacts later on. This means that looking at the reduction peaks in the differential capacity versus voltage plots of the first few mAh of the first charge does not give a complete picture about the reactivity of additives.

The fate of VC during cycling has been measured by GC-MS. The consumption of VC at different states of charge during the formation cycle showed that while a great amount reacts at the negative electrode early on (cell potential smaller than 3.0 V), there is still a substantial portion that is consumed afterward. In addition, measurements of the amount of VC consumed in cells held at different potentials suggested that there was no measurable amount of VC consumed at the positive electrode. 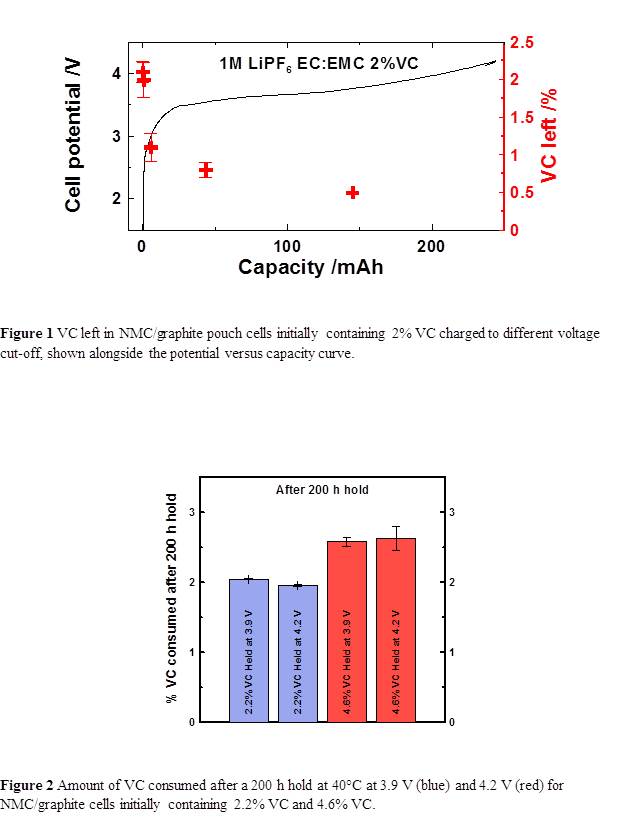