Sunrise, 2nd Floor, Jupiter 3 & 5 (Moon Palace Resort)
N. Takeuchi (Toyota Motor Corporation)
The oxidation reaction on carbon in proton exchange membrane fuel cells (PEMFCs) electrodes has been reported as carbon corrosion recently under several fuel-cell operation procedures [1-4]. The influence of cell design factors for the membrane electrode assembly (MEA) and gas transport in the gas diffusion layer and the catalyst layer were often investigated at start up and partial hydrogen starvation. These results suggested that the coexistence of oxygen in the anode is critical for carbon corrosion on the positive electrode. Although the impact of carbon loss under ordinary fuel-cell operation is less than during startup / shutdown and partial hydrogen starvation situations, it is estimated to be large enough to affect long-term durability of PEMFC. CO2generation on Pt/C catalyst in a PEMFC occurs under potential dynamic condition such as cyclic voltammetry. They each suggested that platinum accelerated the oxidation of carbon supports under potential dynamic condition.

Carboxyl group and phenol group species were induced from graphite structure carbon on carbon surface through the electrochemical reactions with water.

Authors appreciated Dr. T. Abe and K. Miyazaki of Kyoto University for the discussion on this work. 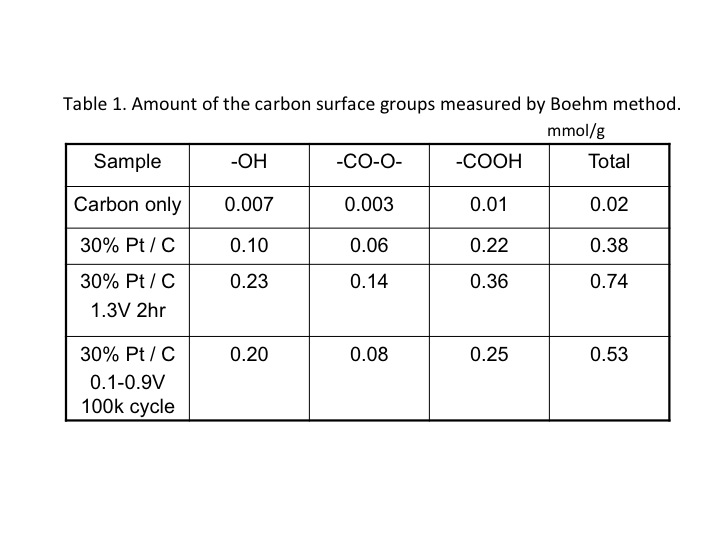