Peak power of 1.4W/cm2 and >90% efficiency at 0.4W/cm2 were reported previously [1]. Cycling with 3M HBr electrolyte and closed anode tank (hydrogen stored in system) yielded Coulombic efficiency above 95% and energy efficiency around 80% as shown in Figure 1. Initial capacity fade was observed over the first 20 cycles, after which the capacity was stable indicating minimal loss of bromine from the system.

Cell materials selection and architecture has a large impact on cell performance. Upon discharge, limiting current behavior arises from liquid flooding in the anode reducing gas transport, as seen in Figure 2. Printing the anode catalyst layer directly on the membrane (red line) improves the performance and limiting current compared to printing it on the GDL before cell assembly (black line). Presumably this is due to improved contact at the membrane/anode interface, resulting in lower interfacial impedance for proton transport and eliminating liquid pooling between the membrane and anode.

The performance can be significantly improved by pre-boiling the membrane-anode assembly (blue line). Boiling increases transport properties, and the improved performance can be attributed to increased proton conductivity in the membrane and anode CL. Water transport and bromine crossover are also increased, however.  The crossover bromine and water must be returned to the cathode to maintain concentrations in the electrolyte solution, increasing system complexity. Bromine crossover and reduction at the anode results in self-discharge, which lowers coulombic efficiency. Boiled NR212 membrane displays a high self-discharge current of 13 mA/cm2, compared to <2mA/cm2 for the as-received membrane.

The impact of these effects on system performance and efficiency during charge-discharge cycling will be discussed.

This work was funded by Advanced Research Projects Agency-Energy (ARPA-E) of the U. S. Department of Energy under contract number DE-AC02-05CH11231 with cost share provided by Robert Bosch Corp and Award No. DE-AR0000262 to TVN Systems, Inc. 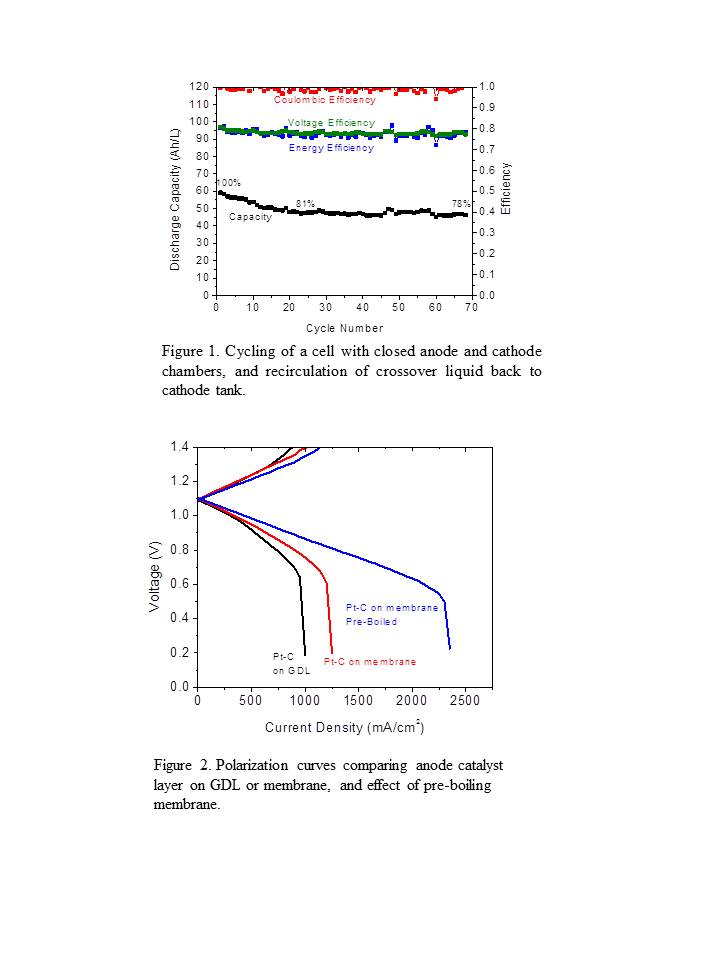