Sunrise, 2nd Floor, Galactic Ballroom 1 (Moon Palace Resort)
M. Doeff, M. Shirpour, S. Engelke (Lawrence Berkeley National Laboratory), M. Asta (University of California-Berkeley), and I. Markus (Lawrence Berkeley National Laboratory, Materials Sciences Department, University of California at Berkeley)
Lepidocrocite titanates are corrugated layered structures with the general formula Ax[Ti2-yMy]O4·zH2O, where A is K, Rb, or Cs and M is Mg, Co, Ni, Cu, Zn, Mn, Fe, Li, or a vacancy. M cations are located in the transition metal layers and A cations between these layers. The value of x is generally between 0.6-0.8 when A is Rb or Cs,1 and 0.7-0.9 when A is K and M is Mg, Zn, Ni, Cu, Fe, or Mn.2 Lepidocrocite structures with more than one type of alkali metal ion on the A sites (e.g., K+Rb, K+Li) can also be synthesized.3 While the direct synthesis of titanate lepidocrocite structures with A=H, Li, or Na alone has not been reported, these variants can be readily prepared via ion-exchange of the K, Rb, or Cs-containing  forms.4 Depending on composition (particularly the identity of A and water content), the zigzag transition metal layers can either be antiphase (C-type, Figure 1a) or in-phase (P or I type, Figure 1b).

We have recently discovered that some sodium ion-exchanged lepidocrocite titanates are electrochemically active in sodium and lithium cells with high capacity for alkali metal ion insertion and good reversibility.5 The average potentials at which ion insertion occur are also very low (~0.5V vs. Na+/Na or Li+/Li ) making them particularly interesting as anode materials due to the potential for high energy density.

Their capacity for sodium ion insertion appears to be critically dependent upon the stacking arrangement. For example, first principles calculations show that Na0.8[Ti1.73Li0.27]O4 with an in-phase stacking arrangement of the corrugated layers can insert an additional Na+ per formula unit, whereas a version with antiphase stacking can insert only half that. This is corroborated by the experimental evidence: P-type Na0.8[Ti1.73Li0.27]O4, prepared by heating an ion-exchanged material to  160°C, can cycle approximately 140 mAh/g in sodium half-cells (close to the predicted value of 160 mAh/g) whereas the C-type analog, prepared by heating the same ion-exchanged compound to 250°C, shows much lower capacity for sodium ion insertion.

The extent of electrochemical activity is also affected by the identity of M. In early stages of the sodium insertion process into Na0.8[Ti1.73Li0.27]O4, Li ions from the transition metal layer drop into the alkali metal layer, opening up additional diffusional pathways for sodium ions. In contrast Mg ions in Na0.8Mg0.4Ti1.6O4 are not expected to be mobile. The result is much poorer than expected electrochemical performance for this material in sodium half-cells.  These and other structural considerations will be discussed in detail for this presentation. 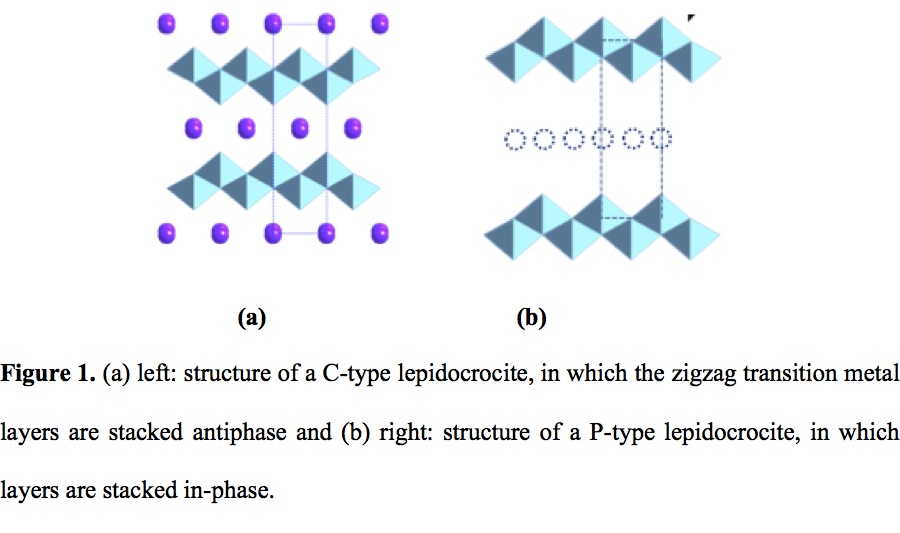