Expo Center, 1st Floor, Universal 14 (Moon Palace Resort)
P. Atanassov, K. Artyushkova, A. Serov (University of New Mexico), and B. Kiefer (New Mexico State University)
Mechanism of the oxygen reduction reaction (ORR) is of particular importance to the design and implementation of novel, non-platinum group metal (non-PGM) catalysts for various types of low temperature fuel cells.  This paper will focus on the examples derived from the class of nano-structured materials composed of a transition metal, nitrogen and carbon, and often abbreviated as M-N-C.1 The synthesis of those materials usually involves pyrolysis, a high-temperature treatment in inert atmosphere, that leads to reactive decomposition of the catalysts precursor and forming of the active material.

UNM has been developing an original method of catalyst synthesis that is based on templating of mono-dispersed of hierarchically structured silica particles:  the sacrificial support method (SSM). This method allows producing catalysts with an open-frame morphology at the meso-scale and at the same time eliminates the “formal” support, thus the entire catalyst is the “active material”.2 During the pyrolysis the support ensures the catalyst dispersion and is responsible for the resulting high-surface area. After the pyrolysis, silica (the sacrificial support) is removed by dissolving in KOH or HF, resulting in self-supported M-N-C catalyst. We have demonstrated catalysts made by SSM derived from porphyrins2-5, heteroamines6,8 and polymers.7 We have studied these catalysts intensely by XPS2 and EXAFS/XANES4 and have made suggestions on the ORR mechanism.5,8 Exceptionally active catalysts were developed based on the SSM and derived from Fe salt and N-containing amines that do not form a complex with Fe in the precursor form. 9

Understanding of the nature of active sites in non-PGM catalysts is difficult due to high heterogeneity of such materials. SSM provides a unique opportunity to study the structure and reactivity of M-N-C catalysts as there is no “support effect” and the activity exceeds the state-of-the-art in non-PGM. All the M-N-C catalysts display plurality of active sites that have reactivity in ORR. Some of these sites support oxygen reduction to peroxide, some are active in peroxide reduction to water, some are active in both reactions and some may support a 4e- reduction of oxygen to water (see Fig. 1). In the actual catalyst a plurality of such moieties is presents and they all contribute to the integral activity. Transition metal appears to be required for the reduction of O2 to H2O (4 e- stoichiometry), yet there is no agreement on the mechanism (2 x 2 e- or 4 e-) and the number of active sites required for ORR completion. With the development of the understanding of which moieties participate in building particular active sites, the design paradigm for M-N-C shifts from the concept of placing as many low-active sites on the surface of the catalyst, to achieving the synthesis of extremely active site type(s), which are typically displayed at vey low surface concentrations. Achieving a single-site mechanism is possible when selectivity to O2 reduction and H2O2 reduction on both sites are similar. This, however does not automatically result in a “direct” 4 e-  ORR mechanism. Such transition to 4 e- ORR on a single site can be achieved when H2O2 intermediate is converted to H2O faster than it is formed, implying design of a low selectivity site with high activity for H2O2 reduction. This paper will discuss both kinetics of ORR in alkaline and in acid media as well as the attribution of the active sites to different defects in graphene as active sites chemical structures. 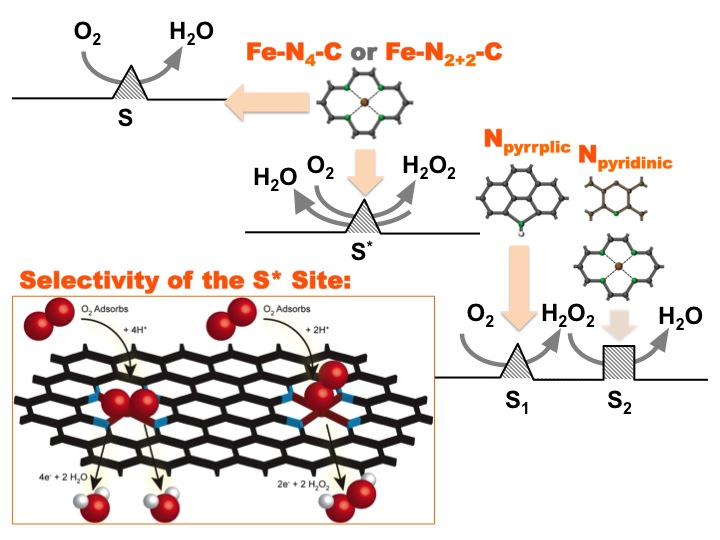